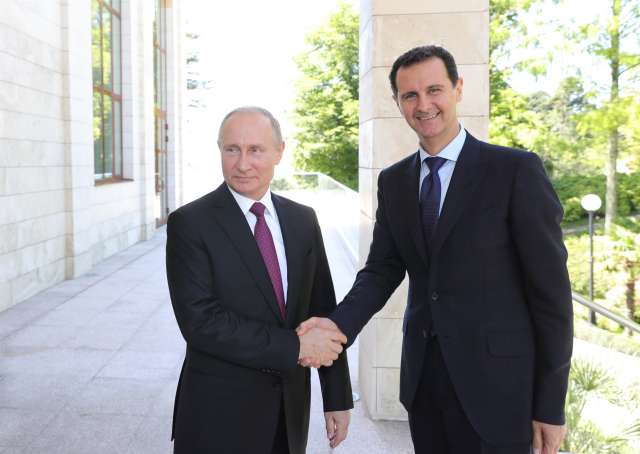 Assad flew to Putin’s summer residence in Sochi on the Black Sea on Thursday.

No details were given of the discussion. Instead, template statements from Russian and Syrian State media said Assad congratulated Putin on his re-election in March and thanked the Russian military for its support:

Stability is improving, and all that opens the doors to the political process, which we started a while ago.

I have always said, and I repeat it again, that we have always wholeheartedly supported the political process, which should proceed in parallel with the war on terrorism.

We know that will not be easy, since there are countries which do not want stability to return to Syria. However, together with you and our other partners and friends, we will move firmly forward with the peace process.

The terrorists have laid down their arms in key locations in Syria, which has allowed for the restoration of Syrian infra-structure. And of course now, after these military successes, additional conditions have doubtless been created for the renewal of a fully-fledged political process.

Russia State news agency TASS raise speculation with a line from Putin, “With the start of a political process in its more active phase, foreign armed forces will be withdrawn from the territory of the Syrian Arab Republic” — prompting analysts to consider if the Russian President was referring to Iranian and Iranian-led foreign militia as well as outside actors backing the opposition and Kurdish factions.

However, it is likely that the two men considered an impending de facto partition of Syria, defying the regime’s wish to reclaim control of all of the country.

Russian airstrikes, essential to any advance by pro-Assad forces, have recently brought the capitulation of East Ghouta near Damascus and an opposition pocket in northern Homs Province in the northwest.

But that consolidation of regime-held territory, backed by Russian military police, does not mean the reconquest of Idlib Province in the northwest, almost all of which has been held by the opposition since spring 2015.

A pro-Assad offensive took a slice of Idlib during the winter, but was halted in late January for the East Ghouta offensive. Since then, the Turkey military — which has intervened in northern Syria since August 2016 alongside rebels, following an agreement between President Recep Tayyip Erdoğan and Putin — has established a series of 12 observation posts around Idlib, northern Hama Province, and western Aleppo Province.

Russia may also check the Assad regime’s desire to reoccupy opposition territory in southern Syria near the Israeli-occupied Golan Heights and the Jordanian border, including the original site of the Syrian uprising, the city of Daraa.

An offensive including Iranian-led militia and Hezbollah fighters could bring a confrontation with Israel, which has co-operated with Russia since a meeting between Prime Minister Benjamin Netanyahu and Putin in September 2015 — just before the Russian military intervention that saved the Assad regime.

In a sign of the ongoing Israeli-Russian arrangement, Moscow did not oppose Israeli airstrikes on regime and Iranian positions earlier this month, following the firing of rockets into the Golan Heights. Instead, the Kremlin confirmed that it will not be sending S-300 air defense systems to the Assad regime in the near-future.

Russia and the Assad regime also face the de facto control of Kurdish factions, supported the US and European countries, over much of the north and east of Syria. Russian propaganda pursuing the withdrawal of the Americans has had little effect — despite the calls of Donald Trump for removal of US forces — and regime, Russian, and Iranian operations to chip away at the territory held by the Kurdish-led, US-backed Syrian Democratic Forces have been repelled.

The US has carried out airstrikes to maintain an exclusion zone around the base at Tanf in eastern Syria, near the Iraqi and Jordanian borders. In February, about 200 Russian “private military contractors” were among those killed when a pro-Assad attempt to take an area east of the Euphrates ended in US bombing of the attacking force.