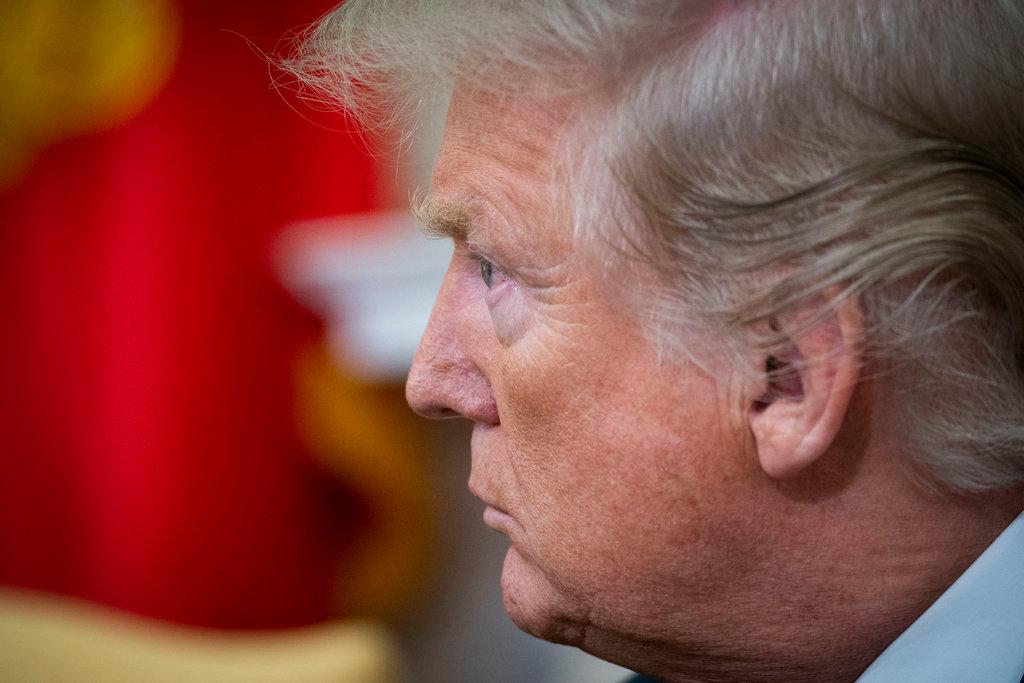 Developments on Day 446 of the Trump Administration:

Trump Angered After Raid on Lawyer

UPDATE 1545 GMT: Donald Trump has lashed out again at Deputy Attorney General Rod Rosenstein and Special Counsel Robert Mueller, adding to speculation that he is preparing to fire both men:

Much of the bad blood with Russia is caused by the Fake & Corrupt Russia Investigation, headed up by the all Democrat loyalists, or people that worked for Obama. Mueller is most conflicted of all (except Rosenstein who signed FISA & Comey letter). No Collusion, so they go crazy!

With investigations closing on Donald Trump and his inner circle, sources say the President is considering the firing of Deputy Attorney General Rod Rosenstein and then Special Counsel Robert Mueller, halting the Trump-Russia inquiry.

“Multiple people familiar with the discussions” said Trump feels a sense of urgency after Monday’s FBI raid on the office and hotel room of his personal lawyer Michael Cohen. “Two people close to the West Wing” said Trump is close to “meltdown”.

Federal prosecutors in New York obtained a warrant for a “no-knock” entry, after Mueller referred information — uncovered in the course of his investigation, but not directly related to Trump-Russia — to them.

The raid also is seeking information about attempts to suppress knowledge of Trump’s reported 10-month affair in 2006-2007 with Karen McDougal, a former Playboy model. McDougal was paid $150,000 by American Media Inc., The National Enquirer’s parent company — whose chief executive is a Trump friend — which then blocked any publication of her story.

Even before the raid, “people close to the White House” said that Trump “became unglued” over the weekend as he watch Fox TV’s descripton of a “deep state” undermining his Presidency. He told advisors that he wanted to get rid of Attorney General Jeff Sessions, Rosenstein, Mueller, and FBI Director Christopher Wray, according to “two people familiar with what took place”.

Aides calmed him down, but Trump’s anger was stoked by the raid. He displayed itSSeg on Monday with an on-camera rant at his Cabinet meeting. He accused the Justice Department of a witch hunt and claimed the FBI raid was an “attack on our country in a true sense”, and derided Attorney General Jeff Sessions for recusing himself from the investigation — and thus rendering himself unable to fire Mueller — because of Sessions’ contacts with Russian Ambassador Sergey Kislyak.

Trump also criticized Rosenstein, the only official with the formal authority to dismiss the Special Counsel, blaming him for Mueller remaining in place: “If you know the person in charge of the investigation, you know about that, Deputy Rosenstein, Rod Rosenstein.”

Trump said of the possibility of removing Mueller: “We’ll see what may happen. Many people have said you should fire him.”

A “source who is familiar with the President’s feelings” said on Tuesday that Trump believes Mueller is “unregulated,” with few checks and balances on his conduct.

Other sources echoed that assessment.

On Tuesday night, Trump conferred with lawyer Alan Dershowitz, a frequent defender of the President on Fox TV, over dinner.

“He Believes He Has the Power to Do So”

White House Press Spokesman Sarah Huckabee Sanders said on Tuesday, when questioned if Trump can carry out his threat, “He certainly believes he has the power to do so.”

While Trump does not have that power, sources said some of his legal advisers say there is a stronger case to fire Rosenstein — paving the way for Mueller’s dismissal — because the Deputy Attorney General approved the referral that led to the raid on Michael Cohen.

Sanders would not say on Tuesday if Trump had discussed firing Sessions, Rosenstein, and/or Mueller over the last 24 hours: “I haven’t had any conversations with him on that. I can’t speak to it beyond that.”