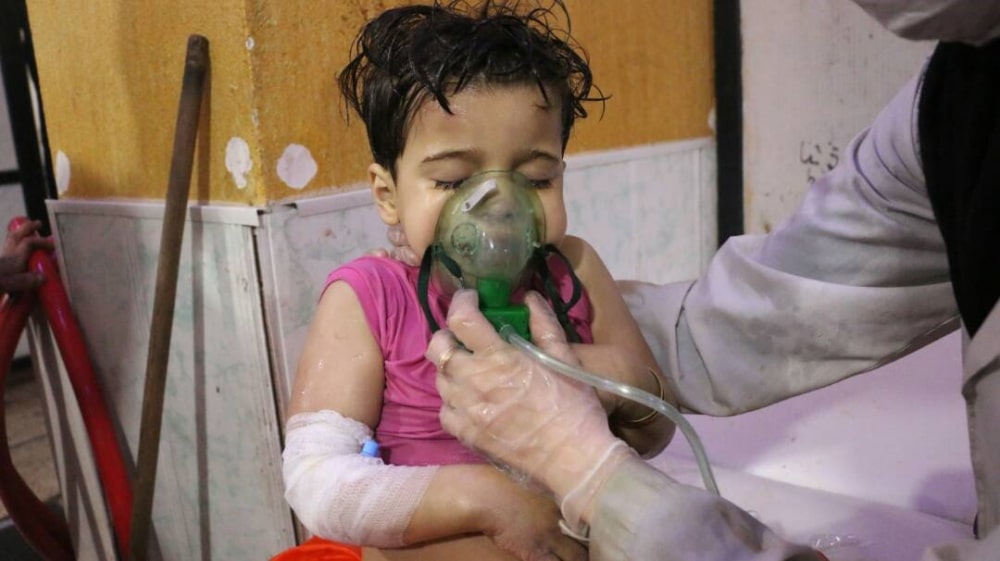 See also VideoCast with TRT World: The US and Assad’s Chemical Attacks on Douma

UPDATE 1845 GMT: The Douma Civil Committee has reportedly confirmed the agreement for forcible displacement of civilians and rebels from Douma to northern Syria.

UPDATE 1800 GMT: A media official of the Jaish al-Islam faction says rebels have reached a deal with Russian negotiators to evacuate with their families, following the intense bombardment and chemical attacks that reportedly killed at least 225 civilians and wounded more than 1,000 this weekend.

The representative said that Jaish al-Islam has not officially announced the deal.

Civil defense reported the casualty toll. “It’s a catastrophe,” Mansour Abu al-Kheir, a rescuer said. “No words or pictures can describe what civilians have lived through these past two days.”

“Only a handful of doctors remain,” Fahad Hanan, a doctor and Douma resident, told Syria Direct on Sunday. “We’ve been working in the hospital for two days straight. It’s a disaster.”

From residents, journalist Elizabeth Tsurkov narrates some of the death and destruction:

My friend in Douma just posted these photos & wrote: "There are still 20 people under these buildings who are burning now. Most of our neighbors are dead."
My friend's family was buried under the rubble too. pic.twitter.com/TyfHYPF82Z

"In short, we are being exterminated in Douma," wrote Sh. another friend who is in the city.
"The city of Douma is now the city of blood… I lost everything, even my house became rubble," added D., another contact in Douma.

Pro-opposition Qalaat al-Mudiq summarizes the strategy of the chemical attacks that appear to have succeeded in forcing surrender:

UPDATE 1420 GMT: Using Twitter, Donald Trump has pledged a US military response to the chemical attacks.

Trump — breaking his pattern of no criticism of Vladimir Putin — said, “President Putin, Russia and Iran are responsible for backing Animal Assad. Big price to pay!”

Trump did not propose any specific steps apart from opening the area for investigation.

UPDATE 1400 GMT: Without referring to the chemical attacks, State news agency SANA is declaring, through an “official source”, an agreement for the departure of all Jaish al-Islam rebels to Jarablus in northern Syria within 48 hours.

The report summarizes that following the attack — suspected to be by chlorine — more than 500 people, the majority women and children, were treated for symptoms of exposure to chemical agents, including respiratory distress, central cyanosis, oral foaming, corneal burns, and the emission of a chlorine-like odor.

One person was declared dead on arrival.

Video of one of the munitions:

The head of the Russian “Center for Reconciliation”, Maj. Gen. Yuri Yevtushenko, called the reports, photographs, and video “fake news”:

We strongly reject this information and confirm readiness after Douma is liberated from militants to send Russian specialists in radiation, chemical and biological protection to collect data to confirm that these statements are fabricated.

Moscow’s response has been much quicker today than over the Assad regime’s sarin attacks on East Ghouta in August 2013, when the Russians scrambled for hours before putting out the false claim that rebels had attacked the area with “homemade weapons”.

Syrian State outlet SANA has now organized the line for its English-language site, saying that “media affiliates” of rebels “are repeating the allegations of using chemical weapons in order to accuse the Syrian Arab army, in a blatant attempt to hinder the Army’s advance”.

In a bizarre denial, the pro-Assad outlet Al-Masdar writes: “The Syrian Arab Air Force (SyAAF) halted their airstrikes over the Jaysh Al-Islam stronghold of Douma after the Syrian Arab Army (SAA) scored several advances on Saturday, a military source [said] this morning.”

Well established regime tactic. Hell of bombs, a few CW [chemical weapons] attacks to increase panic among civilians. Some civilians will flee and hinder rebel military to defend the area. Then ground assault on the weakest points.

All while rockets and airstrikes destroy evidence of CW attacks.

Casualties among civilians in #Douma city, after renewed aerial bombardment targeted the city with more than 30 raids since the morning until now. #AssadHitsDoumawithChemicals #الاسد_يقصف_دوما_بالكيماوي

UPDATE 0830 GMT: There appear to have been two separate chemical attacks on Douma, the first during the day with chlorine gas and the second at night with a stronger, deadlier agent.

Matching accounts that talk of a strike on first responders to prevent rescues, local sources say the chemical assault was preceded by barrel-bombing.

Urgent treatment of a young victim:

The English-language site of State news agency SANA is silent about the attack. Instead, it declares, “BREAKING NEWS: Official source — Terrorists of the so-called ‘Jaish al-Islam’ seek negotiations with the Syrian state. Negotiations to begin within two hours”.

Saleh said the death toll is expected to rise with many people were in critical condition.

He echoed reports that chlorine gas, as well as an unidentified but stronger agent, were used: “White Helmet volunteers are trying to help the people but all what we can do is evacuate them to another areas by foot because most of the vehicles and centres went out of service.”

Pro-Assad forces have killed dozens of people in a chemical attack on the last opposition-held town in East Ghouta, near Syria’s capital Damascus, according to a pro-opposition medical organization and local activists.

The Syrian American Medical Society (SAMS) said 41 people wer killed. Other claims from Douma, including from White Helmets rescuers, put the toll as high as 150.

The SAMS said a chlorine bomb hit the Douma hospital, killing six people. A second attack with “mixed agents” struck a nearby building, killing 35, most of them women and children.

A witness from the Syrian Arab Red Crescent pointed to a deliberate attack on first responders as well as the chemical strikes, “The shelling was carried out by two guided missiles and several barrels from a helicopter….The point went out of service immediately in addition to all of the ambulances. Now there is only the civil defence [White Helmets] left to transport the wounded.”

S.O.S from a medical student Bushra in besieged Douma @WHOSyria @ICRC_sy “The real tragedy today is that almost all doctors have left to #Idlib.Only 5 doctors & medical students are left. We can’t keep up with critical cases & injuries that need surgery. We do not have anything..

Videos showed the bodies of a dozen children, women, and men, some of them with foam at the mouth. Activists and medics noted that, given chlorine is relatively inefficient at causing deaths, it is likely a stronger chemical agent was used in the assault.

According to @rpitti57, one of the rare Western doctors to access the #Syrian #Ghouta, chlorine is used on top of, and to conceal the use of sarin…
The number of victims is rising by the hour.#DoumaGasMassacre pic.twitter.com/GvKPIxugzD

The Assad regime and Russia, as with all cases of chemical attacks, have denied the reports. They said the population in Douma — which has endured more than five years of siege and bombardment and the pro-Assad assault of the past two months — is in a state of collapse and spreading false news.

State news agency SANA declared that Jaish al-Islam, the rebel faction in Douma, was the actual culprit, as it was making “chemical attack fabrications in an exposed and failed attempt to obstruct advances by the Syrian Arab army”.

The Assad regime and Russia have used warnings of “false flag” attacks in the past to cover the regime’s use of chlorine throughout Syria.

In January and February, the regime used chlorine on at least seven occasions on East Ghouta, in preparation for the offensive which has now killed about 1,800 people, wounded thousands, and displaced tens of thousands.

The US State Department said the reports are “horrifying” and, if confirmed, “demand an immediate response by the international community”.

The Assad regime and its backers must be held accountable and any further attacks prevented immediately.

The United States calls on Russia to end this unmitigated support immediately and work with the international community to prevent further, barbaric chemical weapons attacks.

The Assad regime and Russia have taken all other East Ghouta towns, held by the opposition since 2012, in their two-month offensive. The assault on Douma had eased earlier this week; however, it resumed on Friday with more than 40 killed, after talks between Russia and Jaish al-Islam failed to yield a capitulation agreement and the departure of the rebel faction.