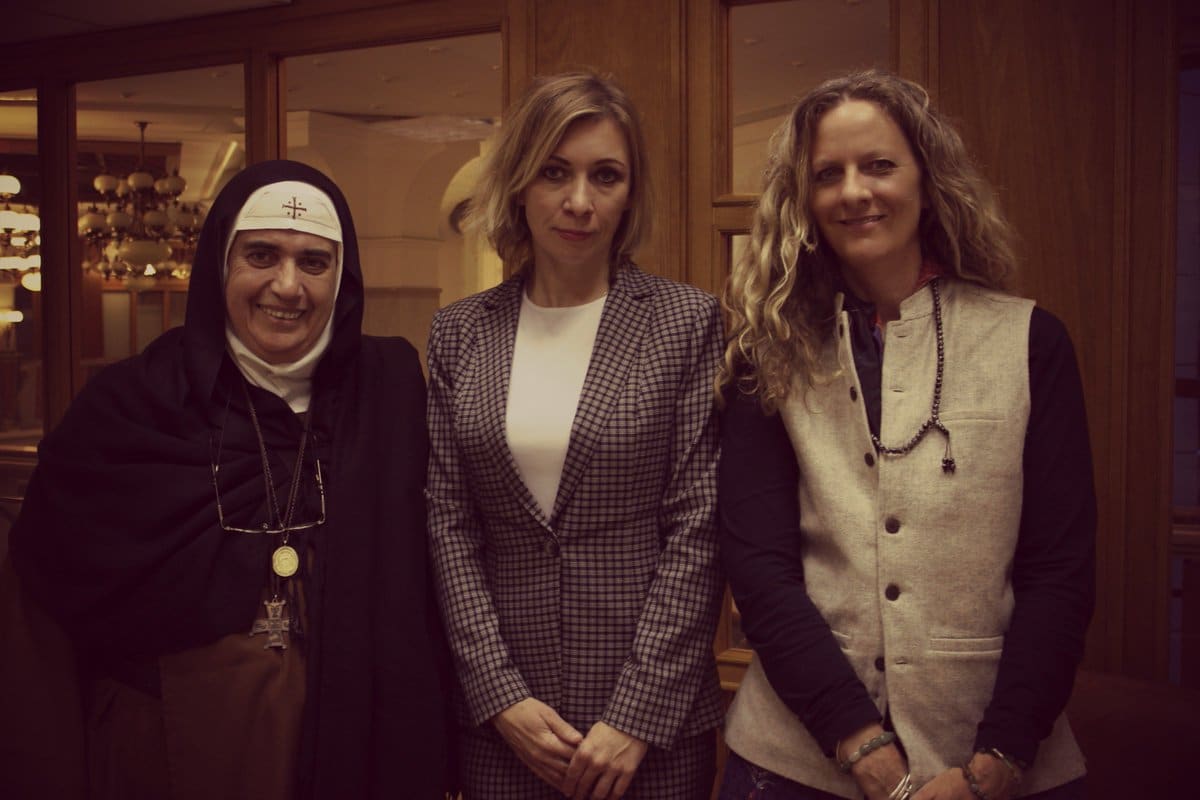 Vanessa Beeley is a British blogger who believes the attack on French satirical magazine Charlie Hebdo was staged, al-Qaeda wasn’t behind the 9/11 attacks and that “Zionists rule France”.

But her real passion is trying to convince the world that the White Helmets, the group that rescues people from the rubble of Syria’s civil war, is a terrorist-linked organisation that fakes its activities to elicit sympathy in the West for a regime change plot against Syrian leader, Bashar al-Assad.

Beeley, 53, is the daughter of the late British diplomat Sir Harold Beeley, and worked in various sales and management roles before turning to activism in 2012.

She would have remained in the fringe world of conspiracy theorists, blogging on alternative news sites and speaking at events alongside holocaust deniers and David Icke if it weren’t for one thing – she, like thousands of other people, became embroiled in a Russian disinformation campaign.

But unlike most, she would take centre stage. In May of 2017 Petr Iliichev, Russia’s Chargé d’Affaires at the UN Security Council, submitted a report containing “information on the work of the White Helmets in Syria”.

The evidence in the document consisted solely of a presentation Beeley had given in London earlier that year.

So why would Russia, a state with extensive intelligence gathering services and boots on the ground in Syria, rely on the word of an unknown British blogger?

Scott Lucas, journalist and Professor of Political Science and International Studies at the University of Birmingham, told HuffPost UK it’s all about how the White Helmets document evidence of possible war crimes:

One of the things that Russia does is they hit medical sites and civil defence headquarters and they carry out double-tap strikes to target rescuers.

So delegitimizing the White Helmets does a couple of things — one is it makes them legitimate targets. Because if they die, the Russians can just say, “They were associated with terrorists anyway.”

Secondly it tries to hinder the White Helmets in putting out information about the Russian attacks that are taking place.

Russia intervened in Syria at the behest of the Assad regime in September 2015, and until a year later, the White Helmets do not appear to have been on the radar of Russian authorities.

During this time the group had been documenting and posting the aftermath of Russian attacks in Syria, including “double taps” – where a target would be hit then hit again a few minutes later, to deliberately target rescue workers.

A HuffPost UK analysis of statements from both Russian representatives at the UN and the Russian Ministry of Foreign Affairs, shows the first mention of the White Helmets was made on 20 September 2016 in relation to the bombing of a UN convoy earlier that month.

According to “eyewitnesses” from the White Helmets organisation that operates on militant-controlled territories and which is often quoted by the Western media, air strikes commenced, and some activists reportedly heard the sound of helicopter engines.

Lucas says the Russians then began to search the social media landscape for information about the White Helmets.

Less than a month after Russia first officially mentioned the White Helmets, Vanessa Beeley was, according to her own blog, “invited to Moscow…to report on the illegal NATO state intervention and dirty war on Syria”.

After Beeley’s trip to Moscow, Russia’s references to the White Helmets quickly escalated into full-blown attacks, from alleging the group were faking rescues to killing a child on camera.

There is nothing to suggest Vanessa Beeley is being paid by the Russian state, beyond possible standard appearance fees on state media channels. She has refused multiple interview requests from Huffpost UK.

Professor Lucas says: “It’s even better if the Russians aren’t paying them or putting them up to it because now they’ve got a true believer.”

“What happens next is [Russian state media channels] RT and Sputnik ask them to write something for them. So they’ll push their pieces and put them on their shows and that’s when they start presenting themselves as journalists.”

At this point it is important to consider the evidence against the White Helmets in the wider context of the Syria conflict.

The aim of a disinformation campaign is the “overarching hope of kicking up a sufficient dust cloud of rumour, speculation, half-truth, conspiracy, and outright lie, to obscure the realities of Russian activities in… Syria” and elsewhere, according to the European Council of Foreign Relations.

This is evidenced in the 20+ explanations the Russian Government and Russian state media has for the recent Skripal poisoning in Salisbury.

The most damning piece of evidence against the White Helmets is a clip of an individual participating in the beating of a Syrian civilian – the only documented crime by a member of the group in seven years of war, for which the man in question was fired.

There is a wealth of documentary evidence of atrocities committed by the Syrian Arab Army – torture, shooting civilians armed only with olive branches and beating confessions out of children.

Despite this, the Syrian Army is lauded by Vanessa Beeley and no criticism of the regime’s alleged crimes is ever aired (although she has acknowledged torture in a leaked private conversation while saying that she is “never going to say it publicly”).

Hassan Akkad, a Syrian who was imprisoned and tortured by the regime in 2011, told HuffPost UK:

This is what pisses me off – people don’t know the mentality of the Assad regime.

When Assad’s troops would come and try to arrest us they used to write over the graffiti with “ASSAD OR WE BURN THE COUNTRY”.

In place of definitive proof of crimes committed by the White Helmets, a steady stream of pictures and videos are supplied by Beeley and others, often containing footage of rescues that is presented in such a way as to sow doubt.

#WhiteHelmets 'rescue' baby girl..unfortunately they probably killed her by the way they carried her, if she had any spinal injury which they never check for. WHY do they carry child to front of ambulance, throw body fm driver side to passenger side? #Ghouta_Fake_News pic.twitter.com/MFmZmB51L4

Some even make the suggestion that the White Helmets are committing crimes (‘stealing children’ for example), and then posting them on social media for all to see.

[Editor’s Note: In a panel discussion last week on the pro-Assad Lebanese outlet Al-Mayadeen, in which I was involved, Beeley repeated her unsupported slur that the White Helmets were kidnapping children — to “stage” the chemical attacks on Douma in East Ghouta — and then not returning them to their parents.]

Vanessa Beeley has also visited Regime-held areas of Syria, often under the supervision of Syrian MPs and the Syrian Army. A recent piece purporting to expose the “egregious western media chemical weapon fraud in Eastern Ghouta” inadvertently details how regime officials are her only source and shepherd her around, ensuring they control what she is able to witness.

In one tweet Beeley clearly states that she believes Syria is “not a police state”.

On balance I would prefer to live in Damascus than any European or US state. Much safer & not a police state. #Not_A_Revolution

But Syria is considered a police state both in law and practice. A state of emergency was lifted after 48 years in 2011 only for peaceful protestors to be imprisoned, tortured and disappeared under existing draconian anti-terrorism laws.

Syrians interviewed by HuffPost UK recalled advice drummed into them from an early age to protect them from the regime’s security services.

“We have this saying in Arabic: ‘The walls have ears.’ So don’t talk even if you’re alone.” — Abdulkarim Ekzayez

Makhzoul* currently lives in Deir ez-Zor and has been on the receiving end of bombs from both the regime and opposition forces. He told HuffPost UK: “Whenever you speak to a camera in the regime’s territories you have to praise the regime and criticise the opposition regardless of what you really believe.”

Asked what would happen to him if he criticised Assad on camera, he said: “I’d be dead.”

Having built up Vanessa Beeley from obscurity, various arms of the Russian and Syrian Governments have presented her as a credible source, using exposure through state media to cement her position.

British independent journalist @VanessaBeeley, who has been reporting on Syria FROM #Syria (unlike many of her mainstream media-employed colleagues), fights back against crude attempts to start a witch hunt aimed at those who don't adhere to the official narrative https://t.co/Azl32reBPY

Our analysis shows that from September 2016 the Russian Ministry of Foreign Affairs and the Russian UN mission has mentioned the White Helmets on 55 separate occasions.

Of these, 52 were direct attacks on the organisation. On only one occasion did the Russian state offer its own evidence – most appear to rely on articles written by Vanessa Beeley or published on websites of which she is an “associate editor”.

The only incident in which Russia did offer its own evidence was in February of this year when Moscow “received a phone call” on a tip line warning the White Helmets were planning of using chlorine to stage a “provocation”.

HuffPost UK asked Raed Saleh, the leader of the White Helmets, what he made of the disinformation campaign against him and his colleagues:

I feel proud actually, I see people who have close relations with this big criminal [Assad] and they come and try to target us.

They ignore ISIS and the real terrorists and they focus on us so it gives me an indication of how effective we are and how much impact we have for the ground.