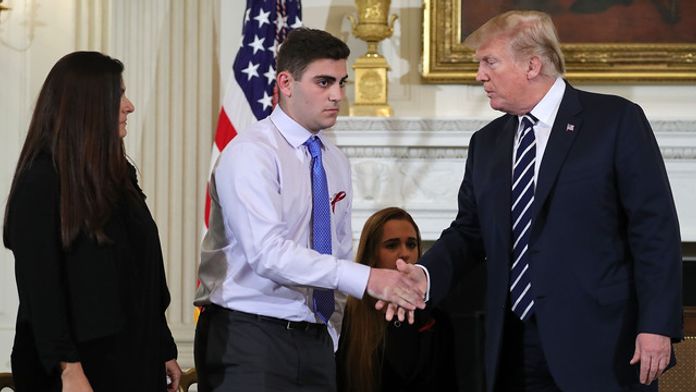 Developments on Day 399 of the Trump Administration:

See also Podcast: The Manafort-Gates Indictments and the Trump-Russia Inquiry
Podcasts: A Turning Point in US for Gun Control?

Trying to regain the initiative more than a week after a mass killing at a Florida high school spurred calls for gun control, Donald Trump scrambles to present his solution of armed teachers.

At a meeting on Wednesday with selected survivors and parents whose children were slain at Douglas High School, Trump declared, “If you had a teacher who was adept at firearms, they could very well end the attack very quickly.”

The proposal immediately brought widespread criticism from teachers, parents, students, and law enforcement officials. It was roundly denounced on Wednesday night at a town hall meeting in Florida, which included survivors who have led the movement for significant gun control — and who were not invited to the session with Trump.

Trump reacted in a series of tweets on Thursday:

I never said “give teachers guns” like was stated on Fake News @CNN & @NBC. What I said was to look at the possibility of giving “concealed guns to gun adept teachers with military or special training experience – only the best. 20% of teachers, a lot, would now be able to

He continued, in a contradictory declared, that “a savage sicko” could be met by “highly trained teachers” who would deter “cowards”. In contrast to “a ‘gun free’ school [which] is a magnet for bad people, ATTACKS WOULD END!”

Later in the day, Trump tried to clarify his position by embracing the National Rifle Association’s proposal to arm highly-trained teachers. He added that the teachers would have the incentive of extra pay: “You give them a little bit of a bonus, so practically for free, you have now made the school into a hardened target.”

Trump said federal money would be devoted to training. He offered the unsupported estimate that 10% to 40% of school employees would be qualified to handle a weapon:

I don’t want teachers to have guns, I want certain highly adept people, people that understand weaponry, guns — if they really have that aptitude.

Trump also repeated the proposals he made on Tuesday, after six days of silence over gun control after the Douglas High School shootings, for “Background Checks with an emphasis on Mental Health”, a raising of the age to 21 on ownership of some weapons, and an end to the sale of bump stocks which convert semi-automatic guns into automatic weapons.

Trump did not explain how his embrace of background checks fit his Administration’s removal of Obama-era checks on those with mental conditions, or whether he was linking the checks to other conditions, such as a bill in the House of Representatives allowing people to carry concealed weapons across state lines.

Instead, he risked a further confrontation by warmly embracing the National Rifle Association and its president Wayne LaPierre:

What many people don’t understand, or don’t want to understand, is that Wayne, Chris and the folks who work so hard at the @NRA are Great People and Great American Patriots. They love our Country and will do the right thing. MAKE AMERICA GREAT AGAIN!

Trump’s support came after LaPierre and NRA spokeswoman Dana Loesch made provocative speeches to a conservative conference, hours after Loesch was put on the defensive at the Florida town hall meeting, rebuked by students, parents, and a local sheriff.

LaPierre went after Democrats, “Their goal is to eliminate the Second Amendment and our firearms freedoms so they can eradicate all individual freedoms.” Loesch accused the mainstream media of exploiting its opportunity of “crying white moms” to press for gun control.

Head of Election Security Commission to be Replaced

The White House and House Speaker Paul Ryan are replacing the head of a federal commission which US states protect their election systems from possible cyberattacks by Russia or others.

Matthew Masterson has been praised by state officials for his work as chair of the US Election Assistance Commission, but he will not be given a second four-year term as one of the four commissioners.

“The appointment expired in December and we are going in a different direction for our nomination. We nominate people for a variety of positions and generally speaking choose our own folks,” Ashlee Strong, a spokeswoman for Ryan, said on Thursday.

She denied that Masterson was being removed or shoved aside.

US officials say the systems of 21 states were tested by Russian hackers during the 2016 election.