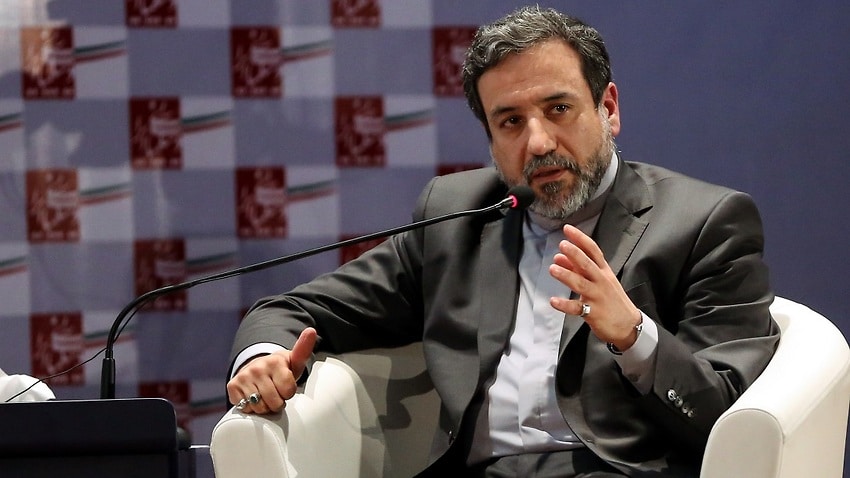 Araqchi: “If companies and banks are not working with Iran, we cannot remain in a deal that has no benefit for us.”

Iran has threatened withdrawal from the July 2015 nuclear deal if it does not see economic benefits in the near future.

Deputy Foreign Minister Abbas Araqchi issued the statement on Thursday, saying that major banks are still refusing to do business with Tehran because of US sanctions.

Washington maintained some restrictions despite the agreement. In particular, foreign companies and financial institutions with US interests can be penalized if they have economic involvement in the Islamic Republic.

A US State Department memorandum, leaked this week, said Donald Trump — despite his repeated declarations about the “worst deal ever” — will renew the waiver of Congressional sanctions on May 12. But Washington will be pressing the three European signatories of the July 2015 agreement — the UK, France, and Germany — to work for a deal over Iran’s ballistic missile program and revisions to the nuclear deal.

Araqchi responded in a speech in London:

The deal would not survive this way even if the ultimatum is passed and waivers are extended.

If the same policy of confusion and uncertainties about the JCPOA [Joint Comprehensive Plan of Action] continues, if companies and banks are not working with Iran, we cannot remain in a deal that has no benefit for us.

The strategy of the Rouhani Government has been to court the European powers, encouraging their continued support of the agreement and seeking the trade and investment breakthrough needed for Iranian economic recovery. The approach has been bolstered by statements from the European Union and the European trio of their commitment to the JCPOA, but major economic deals have not been fulfilled.

While warning of consequences, Araqchi said that Tehran dodes not want to depart the agreement:

If we lose the JCPOA, we will face another nuclear crisis….

The release of Anglo-Iranian political prisoner Nazanin Zaghari-Ratcliffe, detained since April 2016, has been linked to the transfer of £400 million from the UK to Iran, according to her husband.

Richard Ratcliffe said the charity worker’s freedom from Evin Prison in Tehran has been deferred because of the ongoing dispute over the money, paid by the Shah of Iran to the UK for a 1970s arms deal that was never fulfilled.

According to him, Zaghari-Ratcliffe said an Iranian judge told her that the transfer is held up because of a dispute over the interest owed on the £400 million, paid for Chieftain tanks and support vehicles.

British officials have denied any link between talks over the debt and Zaghari Ratcliffe’s release.

No public evidence was presented at the time of Zaghari Ratcliffe’s trial. As Iranian authorities threatened to increase her punishment last autumn, Iranian State TV presented e-mails, taken out of context and distorted, which purported to show that Zaghari Ratcliffe trained Iranian journalists to overthrow the regime after the disputed 2009 Presidential election.

Footage of Iranian police preventing a woman from protesting over compulsory hijab — when she asks what she is doing wrong, she is told, “Disturbing public order”, and is then thrown on the ground:

VIDEO: an Iranian woman protesting against forced hijab in Iran is violently thrown on the floor by the police.

When she asks what is she doing wrong, the police answers “disturbing public order.” She refuses to come down and then is violently pushed down by a police commander. pic.twitter.com/oQgdEnpV8W

In late December, Vida Movahed, a 31-year-old mother, stood atop an electric junction box and waved her hijab on the end of a stick. She was detained, as was a second woman who demonstrated.

But, far from stopping the protests, the detentions only spurred further displays by women — and some men — across Iran.

Iranian security forces are now trying to deter the protests by modifying the junction boxes: 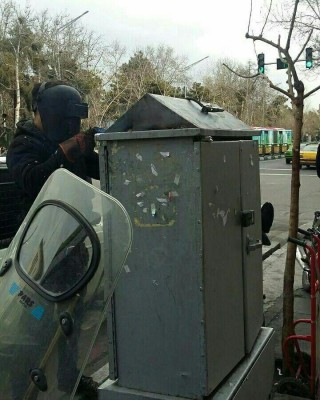