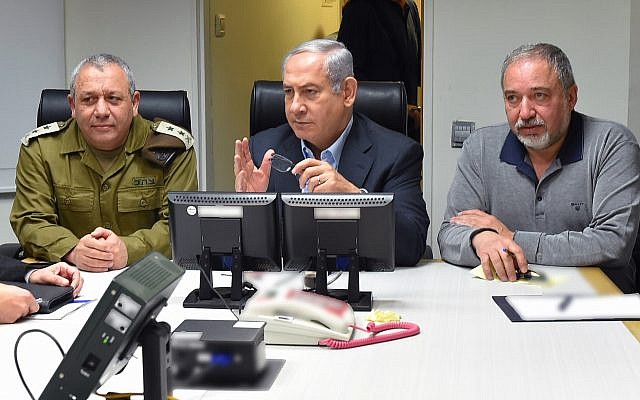 UPDATE, 1000 GMT: Senior Israel Defense Forces officials have told the daily Haaretz that an assessment shows almost half of the Assad regime’s air defenses have been knocked out by IDF strikes.

IDF officials said the F-16 jet downed by a regime anti-aircraft missile on Saturday was hit because it was flying too high.

Daniel Sobelman of Hebrew University, with contacts among the military, tweets:

IDF message this evening, through all military affairs correspondents: Another clash with Iran 'inevitable'. Looks like Israel is determined to prevent Iran from turning 2/10 incident into lasting gain in terms of shaping rules of engagement. A lot more will be at stake next time

Israel’s Prime Minister Benjamin Netanyahu has declared that Saturday’s airstrikes by his armed forces have pushed back Iran and the Assad regime in Syria.

Yesterday, we dealt severe blows to the Iranian and Syrian forces.

We made it unequivocally clear to everyone that our rules of action have not changed one bit. We will continue to strike at every attempt to strike at us. This has been our policy and it will remain our policy.

Citing the interception of an Iranian drone in Israeli airspace early Saturday, the Israel Defense Forces carried out a “complex strategic strike” on a complex in central Syria, claimed to destroy the “Iranian control center” for the drone.

Then, after an Israeli F-16 jet was downed in northern Israel by a Syrian anti-aircraft missile, the IDF launched 12 more attacks — eight on Assad regime and four on Iranian targets — including on anti-aircraft batteries and near the Presidential Palace in southern Damascus. The Israelis said the main command and control bunker of the regime’s military was struck.

The raids were the most intense by Israel inside Syria since 1982 amid the Lebanese Civil War.

“They, and we, know what we hit and it will take them some time to digest, understand, and ask how Israel knew how to hit those sites. These were concealed sites and we have intelligence agencies and the ability to know everything that is going on there and yesterday we proved that.

Katz said Israel does not want to escalate the confrontation but “if Iran continues to threaten and carry out offensive operations against Israel from Syria, Israel will teach Iran a lesson that it will never forget….The Syrian army will find itself under fire if it continues to cooperate and allow Iran to position itself on Syrian soil.”

Iran initially denied that it sent a drone over Israel, although the features of the downed UAV are similar to those of a US RQ-170 Reaper captured by the Iranians in December 2011. A pro-Assad operations room later insisted that the drone was on a regular mission over southwest Syria, gathering intelligence on Islamic State fighters.

Both Tehran and the Assad regime have claimed a tactical victory in the downing of the Israeli F-16.

The head of Iran’s Supreme National Security Council, Ali Shamkhani, said the Assad regime’s actions were “heroic”, ending Israel’s “hit-and-run” strikes. He declared that the Israelis must get ready to face the consequences of aggression against Syria.

Iranian State media proclaims an “agitated Israeli military” amid reports of the deployment of anti-missile batteries in northern Israel.

The State outlets are not acknowledging any damage to Iranian and Assad regime positions from Israeli strikes.

A Drone Pretext for Israeli Action?

A report on Israel’s Channel 10 television indicated that the Netanyahu Government may have been waiting for a pretext for planned attacks on Iran and the Assad regime.

According to European officials, Netanyahu sent a warning to Iran in recent weeks in conversations with German Chancellor Angela Merkel, French President Emanuel Macron, and UK Prime Minister Theresa May. The Israeli leader said that Iran must halt the manufacture of ballistic missiles in Lebanon.

In meetings last month with Merkel and with Macron in Davos, Switzerland, Netanyahu reportedly said Israel preferred a diplomatic solution to the problem but would be forced to use military means if this did not work.

Two of the four European diplomatic sources expressed scepticism over Netanyahu’s missile claim. However, Britain, France, and Germany all conveyed the message to Tehran: “We raised the issue with [Iranian President Hassan Rouhani’s people and told them that it was important for us to convey the information because perhaps President Rouhani is not aware of everything that the Revolutionary Guards are doing in Syria and Lebanon.”

The Iranians did not respond.

Russia’s Foreign Ministry warned the Israelis, “It is absolutely unacceptable to create threats to the lives and security of Russian servicemen who are in Syria at the invitation of its legitimate government.”

Significantly, however, the Foreign Ministry did not extend the same prohibition over actions against Iranian and Iranian-led forces, as well as the Assad regime’s military.

Russia and Israel have cooperated over southwest Syria, near the Israeli-occupied Golan Heights, since meetings between Netanyahu and Russian President Vladimir Putin on the eve of Moscow’s aerial and ground intervention in September 2015. In return for Israeli acceptance of the operations, Russia gave assurances that Iran and Lebanon’s Hezbollah will not establish military positions in the area.

On Saturday, Russian State media summarized a phone conversation in which Putin told Netanyahu that “any steps which might trigger a new spiral of danger for all confrontation in the region [must] be avoided”.

Netanyahu’s press office said the two men “agreed that security coordination between our countries will continue”.

The White House issued a statement supporting Israel’s “right to defend itself from the Iranian-backed Syrian and militia forces in southern Syria”: “We call on Iran and its allies to cease provocative actions and work toward regional peace.”

UN Secretary General Antonio Guterres has called “for an immediate and unconditional de-escalation of violence”, saying, “[All] concerned in Syria and the region have a responsibility and must abide by international law and relevant Security Council resolutions.

Stephane Dujarric, Guterres’ spokesman, emphasized: “The Secretary-General is following closely the alarming military escalation throughout Syria and the dangerous spillover across its borders.”

Seif Steps Down as Leader of Opposition Coalition

The head of the Syrian National Coalition, once the leading opposition bloc in the Syrian conflict, is stepping down.

Riad Seif is scheduled to undergo medical treatment in Germany.

Pro-opposition outlets says the SNC, based in Istanbul, is struggling to find a successor as senior opposition members view the coalition as a weakened entity.

The SNC has been set to the side in political maneuvers within and beyond the opposition, from the formation of the High Negotiations Committee to Russia’s promotion of the Cairo and Moscow factions.