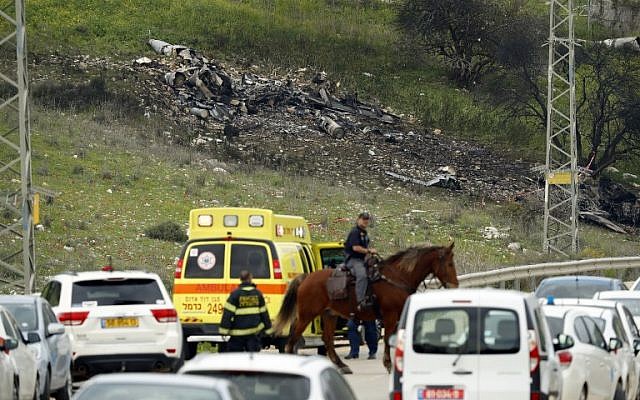 Israeli Prime Minister Benjamin Netanyahu has warned Iran that Israel will continue to defend itself and will not accept a long-term Iranian presence in Syria, following Saturday’s escalation with Israeli strikes and the downing of one of its warplanes by the Assad regime’s anti-aircraft missiles.

Netanyahu said in a filmed statement from the Israel Defense Forces headquarters in Tel Aviv:

Israel wants peace but we will continue to defend ourselves with determination against any attack on us and against any attempt by Iran to entrench itself militarily in Syria or anywhere else….

[Israel] holds Iran and its Syrian hosts responsible for today’s aggression. Our policy is absolutely clear: Israel will defend itself against any attack and any attempt to harm our sovereignty. Iran made such an attempt today. It brazenly violated our sovereignty, it infiltrated its aircraft into Israeli territory from Syrian territory.

Netanyahu said that he had spoken with US Secretary of State Rex Tillerson and with Russian President Vladimir Putin on Saturday.

The Prime Minister emphasized that Israeli-Russian military coordination, established in September 2015 just before Russia’s intervention with widespread airstrikes and ground operations against opposition areas, will continue.

In return for acceptance of the Russian operations, Israel reportedly obtained Moscow’s assurance that the Assad regime, Iran, and Hezbollah would not establish positions near the Israeli-occupied Golan Heights.

Russian State news agency TASS put a different emphasis on the talks, saying Putin told Netanyahu to avoid “any steps which might trigger a new spiral of dangerous-for-all confrontation in the region”.

A Shift in the Conflict?

According to the Israel Defense Forces, Saturday’s escalation began when Israel intercepted an Iranian drone over its airspace — a claim rejected by Tehran.

The IDF then carried out a “complex surgical strike” against what it said was the Iranian control center for the drone, based at the Tiyas airbase in central Syria. During the operation, an Israeli F-16 jet was downede in northern Israel, apparently by an S-125 anti-aircraft missile fired by the Assad regime’s forces. One pilot was critically injured after ejecting, but survived after surgery. Another was lightly wounded.

The IDF then stepped up its attacks, with targets including anti-aircraft batteries and other Iranian positions. Residents reported six strikes near the Presidential Palace in Damascus.

The Israeli Air Force said the raids were “the biggest and most significant attack the air force has conducted against Syrian air defenses” since 1982, amid the Lebanese Civil War.

“Israel is a staunch ally of the United States, and we support its right to defend itself from the Iranian-backed Syrian and militia forces in southern Syria,” the White House said in a statement. “We call on Iran and its allies to cease provocative actions and work toward regional peace.”

Iran: “We Will Bring Hell” on Israel

Iranian Foreign Ministry spokesman Bahram Qassemi rejected the Israeli claim of a downed drone over Israeli airspace: “Claims about the flight of an Iranian drone…are too ridiculous to be addressed because the Islamic Republic of Iran has advisory presence in Syria at the request of the country’s legitimate and lawful government.”

Footage released by the IDF showed the targeting of a drone with features similar to the US RQ-170 Reaper drone, one of which was captured by the Iranians in December 2011.

The deputy chief of the Revolutionary Guards, Brigadier General Hossein Salami, added a tough line with the declaration that the Islamic Republic will “bring hell upon the Zionist regime“. He said Iran can destroy “all American military bases in the region by launching attacks from inside the country”.

Pro-Assad forces are continuing attacks on East Ghouta, near Damascus, which have killed more than 250 people and wounded more than 800 in the past week.

White Helmets rescuers report five people, including a woman and two children, by overnight shelling and bombing on Douma. The assault on civlian areas continues this morning. 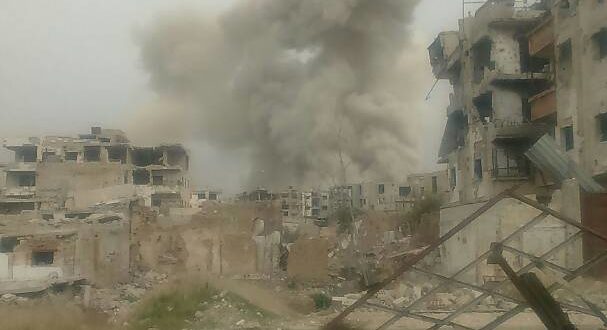 Russian Analyst: 20-25 Russian Mercenaries May Have Been Killed in US Airstrikes

Roman Saponkov, a specialist on Russian “private military companies” involved in Syria’s conflict, says he believes the Wagner PMC may have lost “20 to 25 fighters” in last week’s US airstrikes on pro-Assad forces attacking the Kurdish-led Syrian Democratic Forces in northeast Syria.

Wagner has been involved in the Syrian conflict since 2013, fighting alongside units of the Assad regime and its allies. The Kremlin does not acknowledge any losses suffered by the group — officially, “mercenary activity” is banned and can be severely punished.

The US strikes came after pro-Assad units tried to seize a gas plant from the SDF in Deir ez-Zor Province. The American military said more than 100 fighters were killed in the three-hour confrontation, before retreating west of the Euphrates River.

One of the Wagner fighters, Alexei Ladygin, reportedly killed: 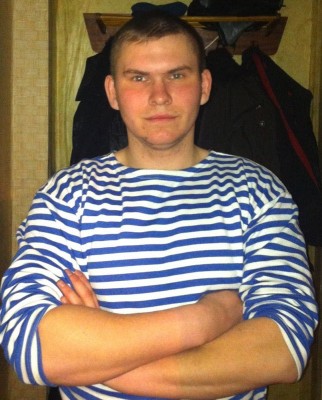 Eleven Turkish soldiers were killed on Saturday, the highest daily toll in the 25-day Turkish-rebel offensive on the Kurdish canton of Afrin in northwest Syria.

Soldiers were killed in clashes with the Kurdish militia YPG, while two died when their helicopter was downed.

The Turkish military maintained that they destroyed 36 YPG targets and “neutralized” 79 fighters in overnight airstrikes.

The military said — without support — that at least 1,266 YPG fighters have been “neutralized” since the offensive was launched on January 18.

By “neutralized”, Turkish officials can be referring to surrender or capture as well as the killing of fighters.