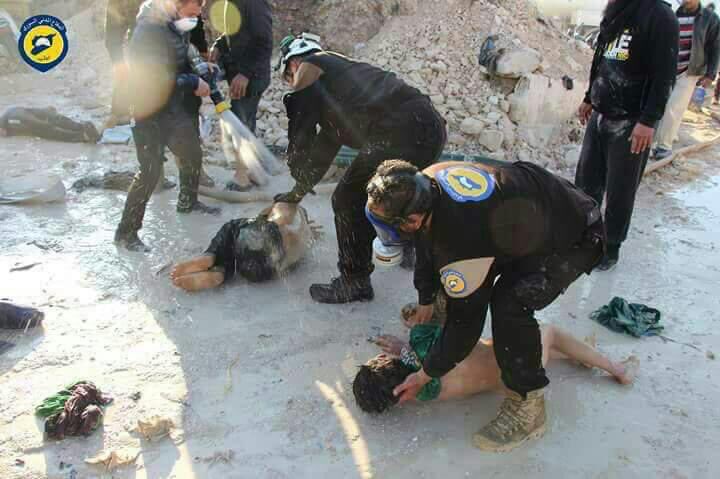 Once a feature of weekly American journalism, the magazine — now online, rather than in print — has been caught out by allowing dubious pundits to fill its Opinion columns.

In one of the worst pieces published about Syria’s 83-month conflict, a man named Ian Wilkie — self-described as an “international lawyer, U.S. Army veteran and former intelligence community contractor” — has regurgitated the favored disinformation points of pro-Assad activists trying to deny the regime’s chemical weapons attacks.

A quick check of Wilkie’s claims would have exposed them as false propaganda, rather than substantial points for analysis. And a look at his Twitter timeline would have immediately pointed out his embrace of pro-Assad agitators (e.g. Vanessa Beeley), “anti-imperialist” conspiracy outlets (Mint Press News), scientists making debunked claims (Theodore Postol), and commentators circulating flawed and distorted claims (Gareth Porter).

But Newsweek seems to have suspended any quality control. Instead, it compounds the damage with a blatant falsehood in its headline, “Now Mattis Admits There Was No evidence Assad Used Poison Gas on His Own People”.

US Defense Secretary James Mattis did not make such a statement. Instead, he said that the US was investigating the most recent claims of a sarin attack — American officials have made clear, in line with the findings of international inspectors from the UN and the Organization for the Prohibition of Chemical Weapons, that the Assad regime is responsible for a series of sarin and chlorine attacks since 2013.

Following a series of fresh allegations of chemical weapon use in Syria, Newsweek published an article on February 8…by Ian Wilkie….

The central argument of the article is that…Secretary of Defense James Mattis…admitted that the US government had no evidence Assad had ever used sarin, including in the August 21, 2013 Damascus attack and the attack on Khan Sheikhoun on April 4th 2017 that resulted in US cruise missile strikes against Shayrat airbase:

Lost in the hyper-politicized hullabaloo surrounding the Nunes Memorandum and the Steele Dossier was the striking statement by Secretary of Defense James Mattis that the U.S. has “no evidence” that the Syrian government used the banned nerve agent Sarin against its own people.

This assertion flies in the face of the White House (NSC) Memorandum which was rapidly produced and declassified to justify an American Tomahawk missile strike against the Shayrat airbase in Syria.

Mattis offered no temporal qualifications, which means that both the 2017 event in Khan Sheikhoun and the 2013 tragedy in Ghouta are unsolved cases in the eyes of the Defense Department and Defense Intelligence Agency.

From this central premise Wilkie hangs various conspiracy theories, half truths, and outright untruths. This is particularly problematic when this central claim is entirely wrong, as Mattis did refer to earlier sarin attacks in the press conference:

Q: Just make sure I heard you correctly, you’re saying you think it’s likely they have used it and you’re looking for the evidence? Is that what you said?

SEC. MATTIS: That’s — we think that they did not carry out what they said they would do back when — in the previous administration, when they were caught using it. Obviously they didn’t, cause they used it again during our administration.

And that gives us a lot of reason to suspect them. And now we have other reports from the battlefield from people who claim it’s been used.

We do not have evidence of it. But we’re not refuting them; we’re looking for evidence of it. Since clearly we are using — we are dealing with the Assad regime that has used denial and deceit to hide their outlaw actions, okay?

It’s clear from the full transcript of the press conference that Mattis is referring to allegations of Sarin use since the US attack on Shayrat airbase, which means Wilkie either didn’t read the transcript, read it and misunderstood it, or read it and decided to claim something it didn’t say. More disturbingly still is Newsweek published the article without first doing basic fact checking on the central premise of the article.

The article is also filled with other untrue statements, for example claiming the following about the munitions used in the August 21, 2013 sarin attacks [against East Ghouta near Damascus, killing more than 1,400 people]:

These analysts have all focused on the technical aspects of the two attacks and found them not to be consistent with the use of nation-state quality Sarin munitions.

The 2013 Ghouta event, for example, employed home-made rockets of the type favored by insurgents.

The claim that the rockets used on August 21, 2013 were a “type favored by insurgents” is totally untrue. The type of rocket used, known as the “Volcano rocket” has been well-documented, and is known to come in two types, explosive and chemical. The chemical variant of the munition has been documented at not only the impact sites of the August 21, 2013 sarin attacks, but in previous attacks against opposition areas and positions as well.

Wilkie also repeats one of the popular theories among chemical weapon conspiracy theorists that people filmed at the impact site of the sarin bomb after the attack would have died from Sarin exposure, stating “these people would all be dead if they had come into contact with real military-grade Sarin”. This is based on the popular misconception among chemical weapon conspiracy theorists that Sarin is a persistent agent, remaining in the environment in lethal quantities long after an attack has occurred.

A number of studies have been done on the persistency of Sarin. A 2013 Norwegian Defence Research Establishment defines chemical warfare agents as “considered persistent if it remains able to cause casualties for more than 24 hours to several days after it was released, whereas a non-persistent one dissipates or loses ability to cause casualties after 10 to 15 minutes”. It uses the following chart to demonstrate the persistency of various chemical warfare agents. 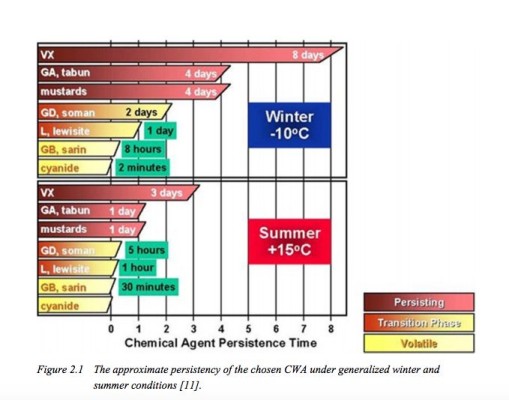 According to local weather reports, the temperature in Khan Sheikhoun on the day of the attack would have started at 7°C and raised to 23°C. With Sarin dispersing in 30 minutes at 15°C, according to the Norwegian Defence Research Establishment report, this debunks any claims that people visiting the site after the attack would certainly die.

Chemical weapons are abhorrent and illegal, and no one knows this more than Carla Del Ponte. She, however, was unable to fulfill her UN Joint Investigative Mechanism mandate in Syria and withdrew in protest over the United States refusing to fully investigate allegations of chemical weapons use by “rebels” (jihadis) allied with the American effort to oust President Assad (including the use of sarin by anti-Assad rebels).

In fact, when asked [by NPR’s David Greene] why she resigned, Del Ponte pointed the finger at Russia’s veto in the UN Security Council blocking action in Syria:

GREENE: You had enough and quit. How much do you point the finger at Russia? Russia is a permanent member of the Security Council. They can veto anything. And they, of course, support the government of Bashar al-Assad. Are they a big reason that nothing has happened, in your mind?

DEL PONTE: Absolutely because they are putting the veto right – that no resolution for the constitution of the international tribunal. So, of course, Russia (unintelligible) because in the end what I mean is that the other states are not making pressure to Russia to change in his opinion. But in any case, that’s politics. So myself – I’m ready to be prosecutor of a tribunal for Syria, but I’m not ready to continue to sit in this commission that just is an alibi for the international community.

Del Ponte quickly blamed the Syrian government for the April 4, 2017 Khan Sheikhoun sarin attack, a point she reiterated as she resigned:

Leaving the council, del Ponte told Syria’s ambassador that she had been right to quickly reach the conclusion that Assad’s government had used chemical weapons during an attack on the town of Khan Sheikhoun in April.

“It was me, mister ambassador,” she said.

“I said that in my opinion and based on the elements we already had, the Syrian government was responsible. Today we have the confirmation after an official commission’s inquiry. So now, we ask for justice, we ask justice for those victims.”

Wilkie moves to chemistry, citing claims by Gareth Porter in an article for Alternet’s “Grayzone Project”:

There is compelling analysis from Gareth Porter suggesting that phosphine could have been released by an airborne munition striking a chemical depot, since the clouds and casualties (while organophosphate-appearing in some respects) do not appear to be similar to MilSpec Sarin, particularly the high-test Russian bomb-carried Sarin which independent groups like BellingCat insist was deployed.

Gareth Porter’s article relies heavily on ignorance of the tests by the OPCW [Organization for the Prohibition of Chemical Weapons] that detected sarin in samples from both the impact site, and the indications of sarin use from biological samples taken from victims. Porter relies on the usual chemical weapon truther claims that these results were from samples that were tampered with in some way, without presenting any actual evidence the tampering took place.

Porter does not address a key piece of evidence, that chemical tests by the OPCW show that not only Sarin was used, but that it had marker chemicals linking it to the chemical weapon stockpiles of the Syrian government. He also ignores that objects recovered from the Khan Sheikhoun craters matched filling caps from Syrian airdropped chemical bombs:

According to information obtained by the Mechanism, the filler cap, with two closure plugs, is uniquely consistent with Syrian chemical aerial bombs. The Mechanism was provided with an assessment of the filler cap and with chemical analysis showing sarin and a reaction product of sarin with hexamine that can only be formed under very high heat. Information was also received that additional metal fragments collected from the crater may possibly correspond to parts of Syrian aerial chemical munitions.

Neither Porter nor Wilkie addresses these issues, which clearly debunk the claims.

Now Secretary Mattis has added fuel to the WMD propaganda doubters’ fire by retroactively calling into question the rationale for an American cruise missile strike.

While in no way detracting from the horror of what took place against innocent civilians in Syria, it is time for America to stop shooting first and asking questions later.

But in the final analysis, it seems it is Wilkie who should “stop shooting first and asking questions later”.