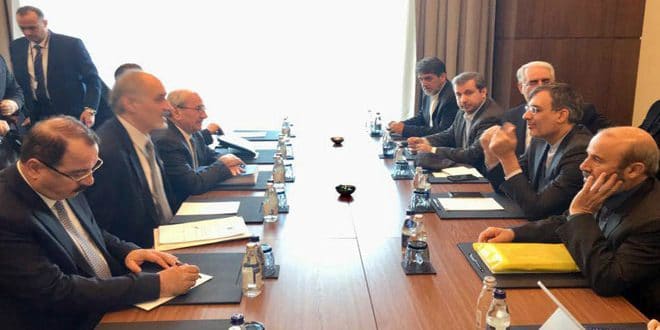 Killing Civilians, Killing Truth in Syria: The Russian Disinformation Campaign and Its Allies

UPDATE 1230 GMT: Russia has issued another announcement of a “national congress” to discuss Syria’s conflict.

The Kazakhstan Foreign Ministry put out the message, saying the conference will be held in the Russian resort city of Sochi on January 29-30. Russian representative Alexander Lavrentiev said the list of participants has not yet been agreed.

The Kremlin said President Vladimir Putin and his Turkish counterpart Recep Tayyip Erdoğan, in a phone call, had expressed their hope for the groundwork for the congress.

Russia regularly proclaimed this autumn that a congress will be convened, only to postpone it because of political issues. These included invitations to Syrian Kurdish groups, prompting objections by Turkey, which has been working with Russia in the Astana process.

UN envoy Staffan de Mistura cautiously received the news, saying the congress should be assessed on its ability to support the Geneva talks.

The envoy also said the Astana meeting has agreed on a working group on the release of detainees. Lavrentiev said working groups on removal of mines and prisoner exchanges were being established.

Tumanov said that the three countries have also decided to set up a working group that would deal with prisoners’ exchange and agreed on the need to clear the Syrian territory from mines.

However, the Assad regime is headlining its demand for the immediate withdrawal of foreign troops, with delegation head Bashar al-Ja’afari saying the presence of Turkish and American troops on Syrian territory is “an aggression”.

ORIGINAL ENTRY: UN envoy Staffan de Mistura said on Thursday that he will join the latest round of Russia-Turkey-Iran talks on Syria’s 81-month conflict.

The three countries opened the eighth set of discussions, with the Assad regime’s participation, in the Kazakh capital Astana yesterday.

Last week the regime walked out of the UN-backed negotiations in Geneva, refusing to meet directly with the Syrian opposition. In his toughest criticism of Damascus to date, De Mistura said the regime group had collapsed the discussions, refusing to speak about any topic other than “fighting terrorism”. He added that the delegation, led by UN Ambassador Bashar al-Ja’afari, had added the “new surprising and disturbing condition” that the regime must have “full territorial control” of Syria before any progress can be made.

The Assad regime hit back by denouncing De Mistura’s handling of the process and asserting that he was now representing unnamed groups who were “working for dollars”.

After talks in Moscow with Russian Foreign Minister Sergei Lavrov and Russian Defence Minister Sergei Shoigu on Thursday, De Mistura said he would go to Astana, with the hopes that he can convene meaningful discussions in Geneva in January.

Meanwhile, UN officials are continuing their vain attempt for relief of the deadly siege on almost 400,000 residents of the opposition-held East Ghouta area near Damascus. The humanitarian advisor for Syria, Jan Egeland, repeated his warning of “catastrophe” and admitted no progress with the Assad regime, “In December we haven’t reached a single soul.”

The UN had tried throughout the autumn to draw attention to the malnutrition and deaths from medical conditions in East Ghouta, worsened by ongoing pro-Assad attacks and a four-year siege which has been tightened since early 2017 with the closure of tunnels and the last checkpoint for movement of supplies.

Doctors have said that one person per day is dying from siege-related conditions, with 15 recently perishing because the regime refused evacuation to a hospital only 30 minutes away.

The UN has warned that thousands of people, including at least 1,500 children, are at risk from malnutrition.

No substance came from the opening day of the renewed Astana talks, with presentation — at least from Damascus — focusing on symbolic support of the Assad regime.

State news agency SANA posted a photograph of the regime group, led by UN Ambassador Ja’afari, meeting the Iranian delegation including Deputy Foreign Hossein Jabari Ansari. A brief summary “dealt with the coordination and consultation between the two sides”.

SANA also mentioned a regime-Russian meeting which “discussed the issues on the agenda of this round as they agreed on the importance of these consultative meetings for the success of the Astana process”.

While both Russia and Iran have been essential in propping up the Assad regime, there have been signals of difference between the two in their vision of a future Syrian settlement. Iran has said that Assad’s removal from power is a “red line” which cannot be crossed, but Moscow has been more cautious — while focusing on the survival of the regime === in committing to Assad’s hold on the Presidency.

Thousands of people gathered in a square in western Aleppo on Thursday to mark the first anniversary of the Assad regime’s recapture of all of the city.

In December 2016, after years of bombardment and months of siege, tens of thousands of residents and the last rebels were forcibly removed from east Aleppo.

Photographs from State media indicated that many of those in west Aleppo yesterday were relatives of pro-Assad troops and militia who have been killed or are still in the armed forces and militias. Marchers held pictures not only of slain regime soldiers but also of Russian personnel killed in operations in Syria.

There were no pictures from east Aleppo, much of which is still badly damaged. 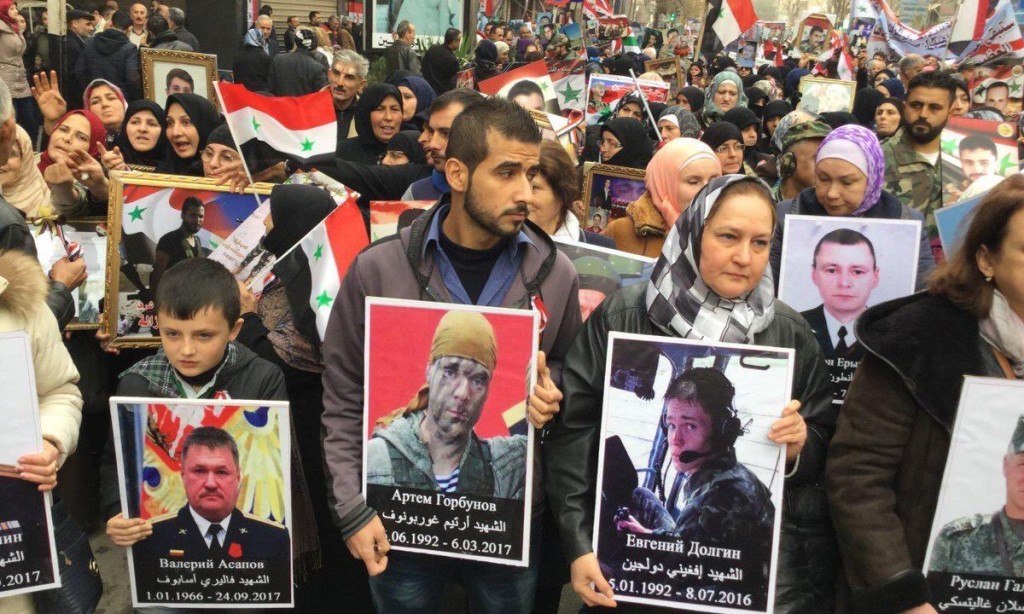 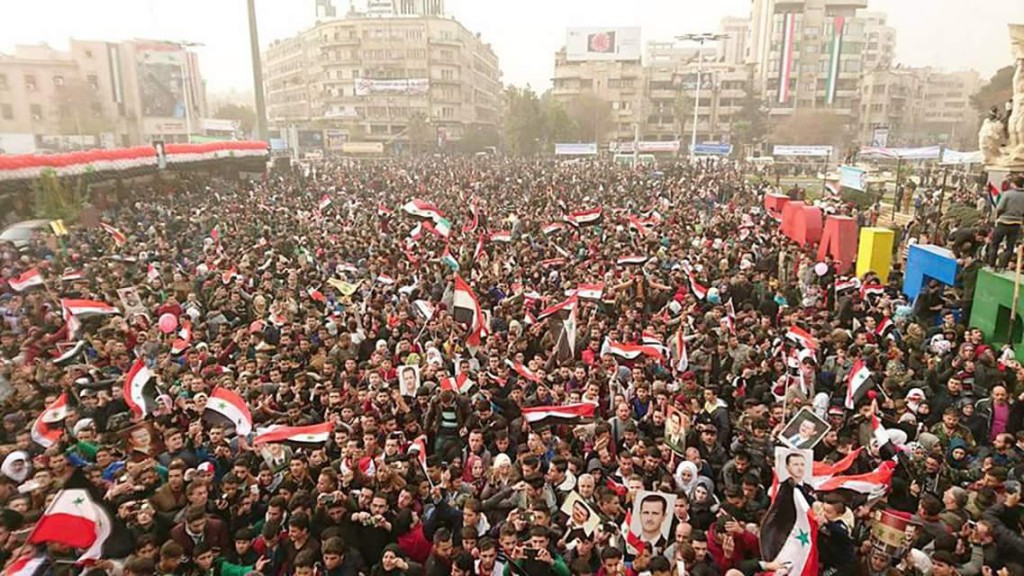 The scene from the forced removal of civilians and rebels from east Aleppo, December 21, 2016: