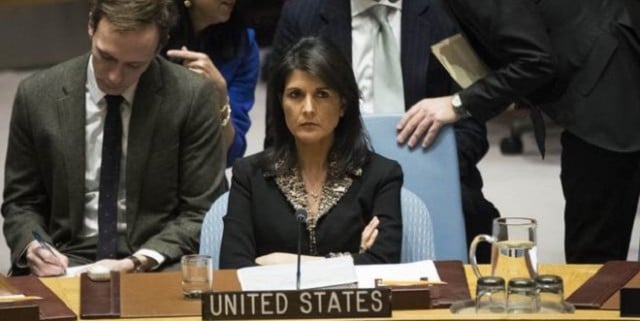 The run-up to the UN General Assembly’s vote over the recognition of Jersualem as Israel’s capital has seen an extraordinary US diplomatic offensive.

First, US Ambassador Nikki Haley warned that Washington is making a list of those who vote for the resolution reaffirming the international status of Jerusalem and decrying any unilateral recognition of the city as the Israeli capital. Then Donald Trump — whose announcement of US recognition set off the current political furor — doubled down with the threat that the US will withdraw economic and military aid from any country that votes the wrong way.

Just before the General Assembly vote on Thursday, I spoke with Austria’s Radio FM4 about why the Trump-Haley statements are a blunder further eroding US standing in the Middle East and the UN — and why they proceeded anyway.

Threats happen all the time at the UN. But you don’t do it publicly.

As an analyst, I can’t figure this one out. Why is the US going to the wall on this one when it can only lead to an adverse reaction, making the opposition to the US and Israel even more vocal?

The United States, shaking its fist, is trying to stand down allies. But far from showing the US has a leading role in the Middle East, I think we are talking about Turkey or Egypt or Saudi Arabia [the three effective sponsors of the resolution] or Iran, or of course Russia from the outside, who are saying, “Look, Washington can have a temper tantrum, but we have our interests and we are going to try to put ourselves at the center, including over Israel and Palestine.”