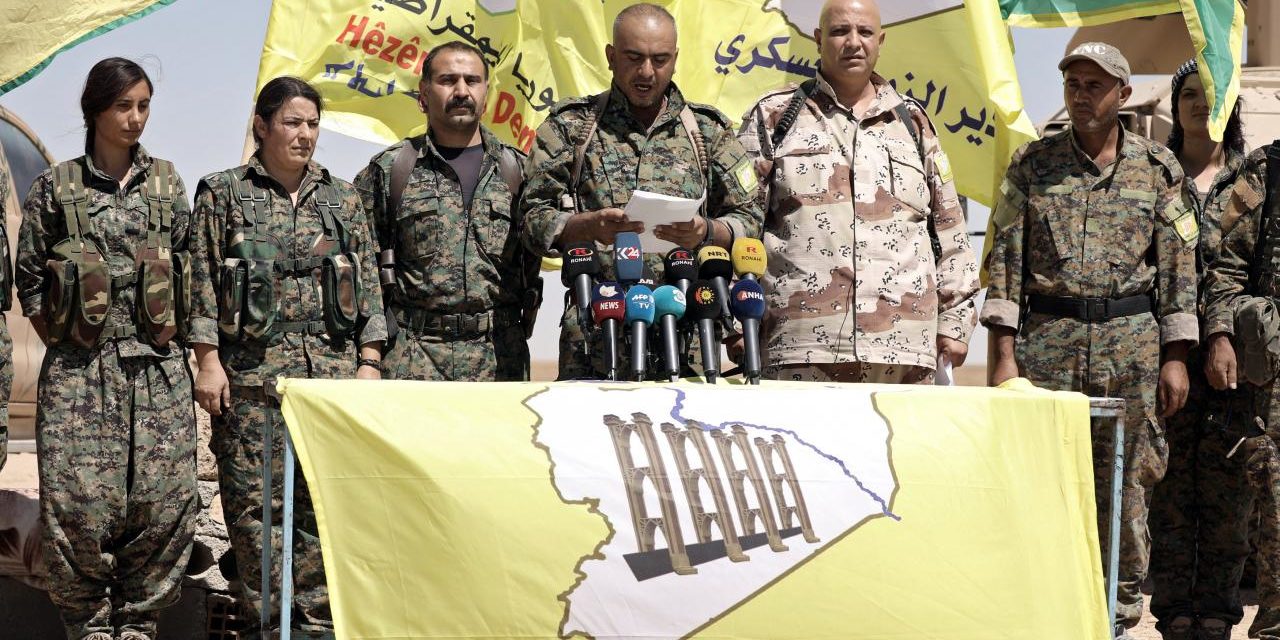 The SDF said six of its fighters were wounded in the strike before dawn on Saturday.

“Our forces east of the Euphrates were hit with an attack from the Russian aircraft and Syrian regime forces, targeting our units in the industrial zone,” east of Deir ez-Zor city, the SDF said in a statement.

The SDF accused Damascus of trying to obstruct its fighters and said such attacks “waste energies that should be used against terrorism … and open the door to side conflicts”.

Ahmed Abu Khawla, the commander of the SDF’s Deir ez-Zor military council, said the raid came as the SDF waged “heated and bloody battles” against ISIS, taking factories in the industrial zone: “We have requested explanations from the Russian government. We have asked for explanations from the coalition…and necessary action to stop these jets.”

The Pentagon said, “Russian munitions impacted a location known to the Russians to contain Syrian Democratic Forces and coalition advisers,” east of the Euphrates River. It said there were no injuries among US troops.

Igor Konashenkov, Russia’s military spokesman at the Hmeimim base in western Syria, responded, “This is not possible. Why would we bomb them?”

Syria State media did not acknowledge the attack. A pro-Assad site referred to the US statement but insisted “absolutely no evidence was provided on the matter”.

In June, US warplanes shot down a regime jet which was attacking SDF forces south of Tabqa in Raqqa Province in northern Syria. There were no further incidents between pro-Assad units and the SDF, both of whom have been pushing back the Islamic State throughout the north and northeast of the country.

A Regime-Kurds War on the Way?

However, the potential for clashes has risen in Deir ez-Zor Province, with regime forces and their foreign allies entering earlier this month and closing on Deir ez-Zor city from the west and south. The offensive has broken a three-year Islamic State siege on both the city and the nearby military airport, and has established positions in the west of Deir ez-Zor city.

Meanwhile, the SDF launched its own incursion into the province a week ago, quickly moving to the north of the city as well as taking the industrial zone to the east. The pro-Assad forces and SDF, led by the Kurdish militia YPG, are now separated by 15 km (10 miles).

Bouthaina Shaaban, a senior advisor to Bashar al-Assad, said on TV on Friday that the regime’s military would soon battle the SDF:

Whether it’s the Syrian Democratic Forces or Daesh [ISIS] or any illegitimate foreign force in the country…we will fight and work against them so our land is freed completely from any aggressor….

I‘m not saying this will happen tomorrow…but this is the strategic intent.

A day earlier the US, seeking to head off any conflict, conceded Deir ez-Zor city to the pro-Assad units and said there would be no entry by the SDF.

But the following day the SDF drew its own line. Khawla said pro-Assad forces would not be allowed to cross the Euphrates River to the east. He said they had fired across the river and warned them not to do so again.

The Assad regime has quickly backed away from Friday’s declaration of Russia, Iran, and Turkey of a de-escalation zone in opposition-held Idlib Province in northwest Syria.

The Foreign Ministry did not renounce the agreement, made at the end of talks in the Kazakh capital Astana. However, it effectively undid it by saying that Turkish forces could not be involved to monitor the zone:

The three-power announcement said that Russian and Turkish troops will establish positions on the borders of the province to ensure a ceasefire.

The Foreign Ministry also kept open the possibility of an attack by the regime’s military to recapture the province, almost all of which has been held by the opposition since spring 2015. It emphasized that the Russia-Iran-Turkey agreement is a “temporary deal”, meant only to ensure movement to regime-held portions of neighboring Aleppo Province.

The Ministry reiterated Friday’s focus of the regime’s Astana negotiator, UN Ambassador Bashar al-Ja’afari on “Syria’s territorial integrity” and said the regime would “not halt its war to eradicate terrorism wherever it exists and whoever supports it”.