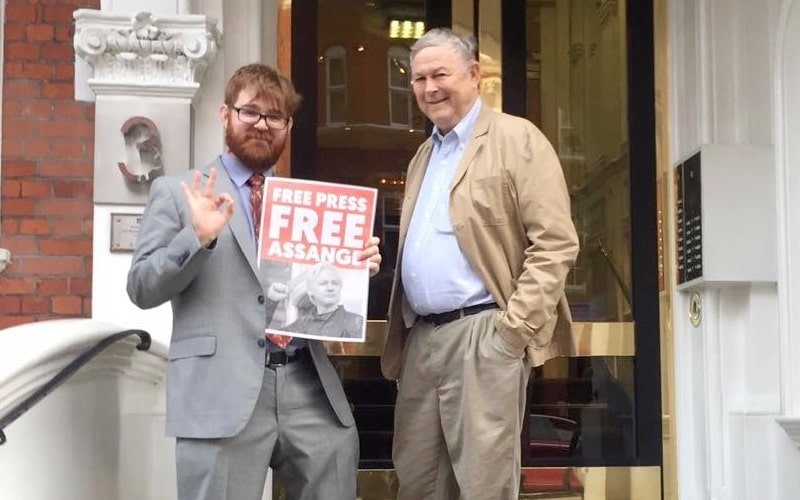 Pro-Russia US Representative Dana Rohrabacher has proposed the pardon of WikiLeaks founder Julian Assange in return for the group’s “evidence” that Moscow did not provide hacked e-mails that sought to influence the 2016 US Presidential campaign.

Rohrabacher, who has long promoted the Kremlin’s interests and continued to do so amid the Trump-Russia investigation, proposed the deal on Wednesday to White House Chief of Staff John Kelly.

Rohrabacher said the arrangement would involve a pardon or “something like that” for Assange, sought by Washington on charges over publication of US Government documents. Assange would present a computer drive or data-storage device supposedly exonerating Russia.

Assange has been in sanctuary in the Ecuadorean Embassy in London since 2012, blocking extradition to face sexual assault charges in Sweden. Rohrabacher traveled to the UK in August to see him. After the visit, the Congressman said . Assange “emphatically stated that the Russians were not involved in the hacking or disclosure of those e-mails”.

Rohrabacher pressed for a meeting between Assange and a Trump representative, preferably someone with direct communication with the Oval Office: “I would be happy to go with somebody you trust whether it is somebody at the FBI; somebody on your staff.” He was wary of going through the CIA, asserting that the agency wanted “to cover their butt by having gone along with this big lie”.

A Trump Administration official said on Friday that Kelly told the Congressman that the proposal “was best directed to the intelligence community” and did not inform Donald Trump of Rohrabacher’s message.

US intelligence services have concluded that WikiLeaks published the stolen information passed by Russia, possibly through a third party.

Rohrabacher, a former speechwriter for President Ronald Reagan who became a Congressman in 1989, has long put forward Russia’s positions. He defended Moscow in its 2008 war with Georgia and supported the Russian annexation of Crimea from Ukraine in 2014.

The advocacy is so strident that House Majority Leader Kevin McCarthy said in a private meeting of GOP legislators in June 2016, “There’s two people I think Putin pays: Rohrabacher and Trump.” House Speaker Paul D. Ryan cut off further conversation and swore those who were there to secrecy.

In 2012, FBI agents warned Rohrabacher that a Russian spy was trying to recruit him as an “agent of influence”. The Congressman dismissed the significance of the message in a May 2017 interview, saying, “Any time you meet a Russian member of their Foreign Ministry or the Russian government, you assume those people have something to do with Russian intelligence”.

Rohrabacher is also involved in the investigation of former Trump campaign manager Paul Manafort for his ties and consultancy contracts with pro-Russian Ukrainian parties and politicians. In 2013, Rohrabacher was the sole US legislator whom Manafort met — a discussion not disclosed until the Trump-Russia investigation this year.

Rohrabacher met privately with high-ranking Russian justice officials in April 2016. Upon his return to Washington, he lobbied against the Magnitsky Act, which imposed sanctions on Moscow in 2012 over human rights abuses.

The Congressman promoted a trip in January 2017 to meet with the Russian Parliament in January, but cancelled it — reportedly on the order of Ed Royce, the GOP Chairman of the House Foreign Affairs Committee.

Rohrabacher said he decided not to go because he was worried the controversy over Russia and the US election would make it difficult to have serious conversations.