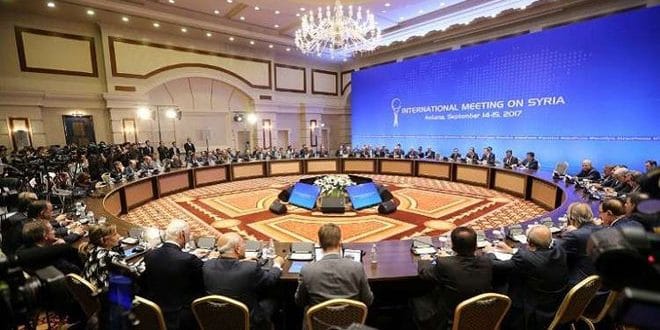 Russia, Iran, and Turkey have declared a “de-escalation zone” in Idlib Province in northwest Syria, saying that they will deploy military observers on the borders of the area.

The announcement was made on Friday in the latest round of talks in Kazakhstan’s capital Astana, where discussions have been held periodically since January.

However, the three countries — who have previously declared the observer proposal — gave few details of the supposed breakthrough, and said some issues are to be worked out.

The Assad regime put out different signals over the initiative. Its negotiator, UN Ambassador Bashar al-Ja’afari praised successful talks. But Bashar al-Assad’s senior aide Bouthaina Shaaban said attempts to divide Syria had failed and reiterated the regime’s declaration that it will reclaim the entire country, including “Idlib and other areas”.

Ja’afari also hinted that Idlib could not remain outside regime control, insisting that the three powers “are concerned with preserving Syria’s territorial integrity, sovereignty, and independence”. At the same time he expressed doubts about Turkey, which had supported opposition elements throughout Syria’s 79-month conflict — Russia and Iran, both essential allies of the regime, “have to monitor the commitment of the Turkish side”, he said.

The Astana trio denied that they were partitioning Syria. They said the zones of deployment would be temporary, although they may be extended beyond the initial six-month period.

Russian negotiator Alexander Lavrentiev said each of the three countries will dispatch about 500 observers, with the Russian contingent consisting of military policemen. He said locations had yet to be determined.

The Russian envoy also said Moscow, Iran, and Tehran have started discussing the establishment of “national reconciliation committees”, continuing this in late October.

“Whether it’s the Syrian Democratic Forces or Daesh [ISIS] or any illegitimate foreign force in the country…we will fight and work against them so our land is freed completely from any aggressor,” Shaaban told al-Manar, the TV network of regime ally Hezbollah on Friday.

Since its creation in October 2015, the SDF has taken much of north and northeast Syria from the Islamic State. It is now pursuing the takeover of ISIS’s former central position, the city of Raqqa, capturing more than half in operations backed by US airstrikes and artillery.

At the same time, pro-Assad forces have pushed back the Islamic State in Deir ez-Zor Province in eastern Syria. The pro-Assad offensive and the SDF are now separated by only 15 km (10 miles) near Deir ez-Zor city, although the SDF said this week that they will not move into the provincial capital as the pro-Assad forces try to evict ISIS.

Shaaban insisted that the SDF is working with ISIS as it claims oil-rich areas in northeastern Syria “without any fighting”.

“But they will not get what they want,” she maintained.