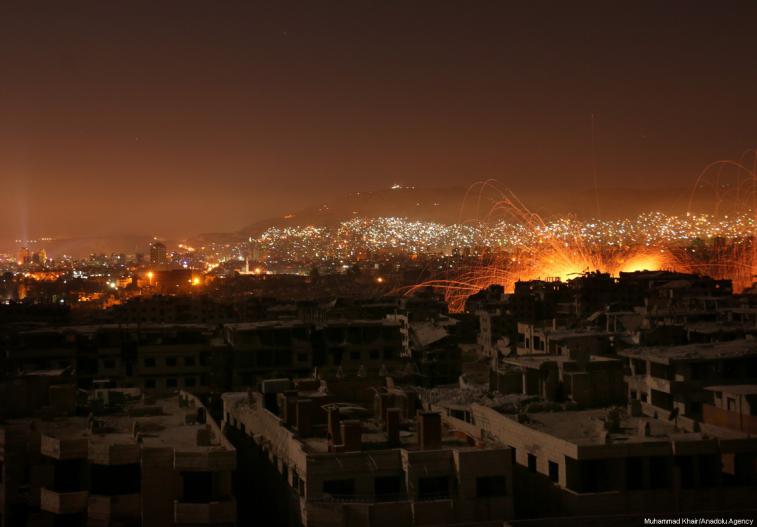 The Assad regime’s military pounded Jobar in northeast Damascus with airstrikes and shelling on Monday, in the latest attacks in five years of fighting in the area.

Using the Qasioun Heights overlooking the Syrian capital, the army tried again to break rebel resistance in an offensive which has escalated since June. At least 15 civilians have been killed and scores injured in three days, according to activists.

The activists said there was less intense shelling on Zamalka, Harasta, and Kafr Batna.

Pro-Assad forces have taken much of the East Ghouta area near Damascus since spring 2016, and they have forced capitulations of suburbs such as Barzeh, Qaboun, and Tishreen this spring with sieges, bombardments, and ground assaults. However, they have been unable to finally seize Jobar, 2 km (1.2 miles) east of the walls of the Old City, and nearby Ein Tarma — despite resorting to chemical weapons on five occasions in July.

The ongoing attacks belie the publicity of Russia, the Assad regime’s main ally, which says it is trying to bring a truce with a “de-escalation zone” in East Ghouta, including checkpoints manned by Russian military police.

Moscow has left the lines of the zone vague, allowing the Assad regime to continue the assault on Ein Tarma and excluding any possibility of a halt to hostilities in Jobar. Only a few hundred families, sheltering in basements, remain in Ein Tarma.

Abu Obada al-Shami, a Failaq al-Rahman commander, said of the increased use of “elephant” rockets — inaccurate and improvised munitions often made from gas canisters — “The elephant rockets are not having mercy on us. We have dug tunnels and fortified our positions so they are unable to advance.”

A rebel fighter, Abu Hamza, asserted, “This truce is a lie. The regime has not implemented it. They are shelling us without interruption using all types of weapons.”