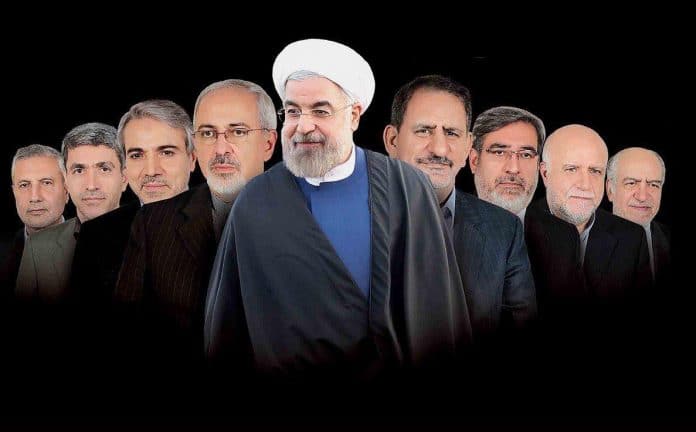 Reformists: “Rouhani should come looking for us”

MP Rasoul Montajabnia, a leader of the National Trust Party, summarized the worry about the absence of reformists in a new Cabinet, amid speculation about a shakeup by the President: “Rouhani should pay special attention to reformists, because without reformist support, Rouhani would have been squashed.”

Montajabnia said that rather than reformists seeking a place in the Cabinet, “Rouhani should come looking for us.”

MP Ghassem Mirzaei of the Omid faction added his regret that “the number of reformists in the Cabinet will decline”, while Women’s Faction MP Teybeh Siavoshi criticized the lack of gender diversity despite Rouhani’s promise to support the increased presence of women.

Reports have indicated that Rouhani, under pressure from the Supreme Leader’s office and other conservatives, is planning to replace half of his Cabinet members.

Reformist support was vital in the President’s surprise election in 2013, and it helped propel him to an unexpectedly large victory over conservative cleric Ebrahim Raisi on May 19. Reformists also worked with centrists to take many Parliamentary seats in early 2016, breaking the conservative hold on the Majlis for more than a decade.

Before Rouhani’s inauguration on Saturday, reformists began to express their doubts in public. Abdullah Nouri said in a meeting with students at Tehran University on July 31, “The concerns of the reformists are that if Rouhani’s promises and slogans are forgotten and deposited in the archives, the trust of the people will be damaged and the country will be harmed.”

A Deal with Larijani?

Reformists have objected that the conservative Interior Minister Abdolreza Rahmani Fazli, has not backed reform-minded Government supporters as governors. They speculate that Fazli’s likely reappointment, and the possible naming of Communications Minister Mahmoud Vaezi as Rouhani’s Chief of Staff, are part of a deal with Speaker of Parliament Ali Larijani.

Many Reformists opine that Fazli’s likely reappointment is the result of a deal between moderate-conservative parliamentary speaker Ali Larijani and Rouhani. Outspoken member of parliament Ali Motahari told local media July 21, “They told the president to propose that figure [for the Interior Ministry], [and in return] we will help you so that your three preferred ministers obtain votes of approval [in the parliament]. In this vein, an interior minister was proposed with whose performance we are not really satisfied with.”

Moreover, Rouhani’s likely decision to name Mahmoud Vaezi as his new chief of staff has also raised criticism among Reformists, who think Vaezi is working with Larijani and moderate-conservatives to marginalize the Reformists in the Cabinet.

French carmaker Renault has finally signed an agreement to produce more than 150,000 cars a year in Iran, the largest such deal in the history of the Islamic Republic.

Renault holds 60% of the shares in a partnership with Iran’s Negin Khodro and the Industrial Development and Renovation Organization. The company will produce the latest versions of its Symbol and Duster brands from 2018.

IDRO chairman Mansour Moazzami said a second-phase agreement, yet to be completed, envisages production from 2019.

The French company PSA signed a deal with Iran Khodro in June 2016 to produce 200,000 Peugeots a year in the Islamic Republic, and it has an agreement with Iran’s SAIPA to produce about 200,000 Citroens.

Iran’s overall car production is expected to reach two million cars a year by 2020, up from 1.2 million in 2016 as the country tries to recover from years of US-led sanctions.

Despite implementation of the July 2015 nuclear agreement, Iran has struggled to complete trade and investment deals with European firms who fear American punishment. However, it has begun to advance with French companies — in early July, Total signed a breakthrough $4.8 billion deal for development of the South Pars gas field, the largest in the world.