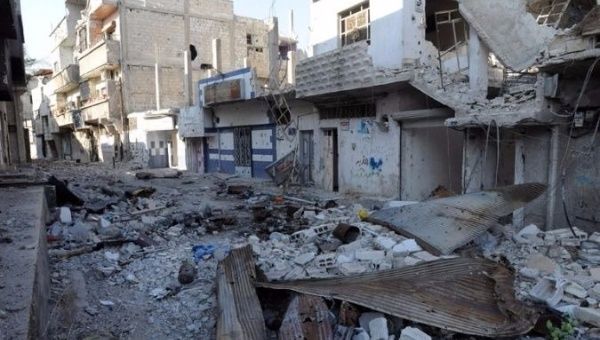 Residents of Raqqa in northern Syria say more than 100 civilians have been killed since Sunday by US-led airstrikes, as an American-supported, Kurdish-led force pursues its offensive to take the Islamic State’s central position in the country.

The residents said 55 civilians were slain on Monday in two neighborhood in the east of the city, Bedou and al-Sukhani. In the past week, the death toll is estimated to be at least 170.

The latest deaths bring the toll, in the estimates of the monitor Airwars and international organizations such as the UN, close to 1000 in and Raqqa since March, when the Syrian Democratic Forces began its advance on the city.

Stéphane Dujarric, the spokesman for the UN Secretary-General, said on Tuesday:

Our humanitarian colleagues tell us they are deeply concerned by unconfirmed reports of a high number of civilians killed by airstrike in Raqqa city over the last 24 hours.

In recent days and weeks scores of civilians have reportedly been killed and injured in Raqqa due to airstrikes and shelling and up to 25 thousand people remain trapped in the city.

A statement by the US-led coalition said, “The Coalition respects human life and is assisting partner forces in their effort to liberate their land from ISIS while safeguarding civilians. Our goal is always for zero civilian casualties.”

Lt. Gen. Stephen Townsend, the commander of US forces in Iraq, told a press conference in Baghdad:

But I would ask someone to show me hard information that says that civilian casualties have increased in Raqqa to some significant degree.

Defense Secretary Jim Mattis, visiting US forces in the Iraqi capital, asserted that there had been “no military in the world’s history” that has paid more attention to limiting civilian casualties” and blamed ISIS for hiding “behind women and children”.

#US-led Coalition bombed #Raqqa 1784 times since the beginning of the Operation. 22 times per day in June, 23 in July and 34 times in August pic.twitter.com/jMMvD78J0c

The SDF entered Raqqa in June and has taken about half of it, but has struggled in recent weeks to break ISIS resistance in the remainder.

Civilians who remain are also facing shortages of food and medicine.

In Raqqa city, if you don’t die from air strikes, you die by mortar fire; if not by mortars then by sniper shots; if not by snipers, then by an explosive device.

And if you get to live, you are besieged by hunger and thirst, as there is no food, no water, no electricity.

The awards committee said in a statement that the recognition is “a testament to the enormous bravery and courage shown” by the White Helmets, who have saved more than 100,000 people — and had almost 200 volunteers killed in the line of duty — since 2013.

A White Helmets spokesperson said, “We are very happy to receive this peace prize because it means that there are still people around the world who support our mission to protect lives, and that the voices for peace are much stronger than the voices for war.”

The Tipperary Peace Convention was set up in 1983 to promote peace and reconciliation. Its first Peace Award in 1984 was given to Seán MacBride, a founding member of Amnesty International. Other recipients include Nelson Mandela, Bob Geldof, former Irish President Mary McAleese, and former US President Bill Clinton.