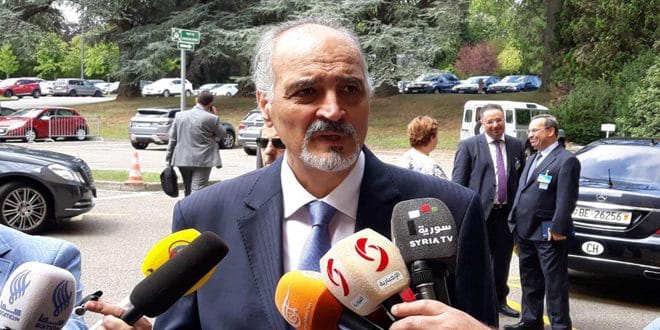 The seventh round of Geneva talks on Syria’s conflict all but disappeared from sight on Tuesday, leaving uncertainty as to whether any progress can be made towards resolution of key issues.

Ja’afari did issue a statement focusing on “counter-terrorism”, often used by the regime as a term to cover all opposition to Bashar al-Assad: “What we were warning against, about terrorism becoming a global phenomenon that will affect everyone including its sponsors, has become a reality now.”

He also said legal and technical experts from the regime met de Mistura’s team to discuss a 12-principle paper on the basis and goals of the political process.

But de Mistura made no statement. His only comments, in an interview published by Russia’s RIA on Tuesday, were that Syrian Kurdish groups should be involved in the drafting of a new Constitution.

And the Syrian opposition, which has been distancing itself from talks both in Geneva and the Kazakh capital Astana, offered no remarks yesterday.

The opposition has said that progress must be made on an end to pro-Assad bombing and sieges and the release of political detainees before the drafting of the new Constitution, arrangements for elections, and a political transition can proceed.

However, Bashar al-Assad has dismissed any talk of a transition which would lead to his departure from power, and the regime has continued to deny access by aid convoys to besieged areas.

Amid the proclamation of the US-Russia “de-escalation zone” in the southwest, pro-Assad forces have attacked in the southeast in eastern Suweida Province. There are also reports of a large redeployment of Iranian-supported foreign militias and regime units from the southwestern zone to pursue offensives in other areas.

Russia hailed the resumption of the talks on Monday with Foreign Minister Sergei Lavrov emphasizing “constitutional reform and the fight against terrorism”. But Moscow made no comment on Tuesday about any progress.