“This Liberation of Mosul Must Not Be Squandered” 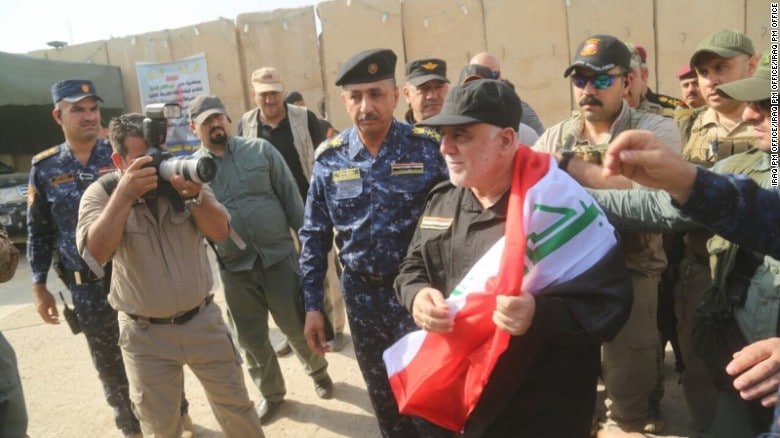 UPDATE: A version of this article, originally published on EA on July 10, is now posted on The Conversation.

After an 8 1/2-month offensive by Iraqi forces backed by US-led coalition airstrikes, the liberation of Mosul from the Islamic State is “at hand”, Iraqi Prime Minister Haider al Abadi said on Sunday.

Iraqis have been looking for this moment for the past three years, after the Islamic State captured the country’s second city and other key areas in June 2014. Abadi’s congratulations of the security forces marks the sense of pride widely shared among Iraqis, who now see the prospect of a national cross-sectarian army whose leaders will not again fail. Since the announcement of the recapture of the al-Nuri Mosque, destroyed by ISIS last month, social media has been buzzing with hashatags such as سقطت_دولة_ الخرافة (The State of Myth Has Fallen), #الموصل_تتحرر (Mosul is Being Liberated), and #غرد_للسلام (Tweet for Peace).

The general atmosphere is that of joy and celebration, yet for many, the feelings are mixed. The liberation of Mosul does not mean that the Islamic State has been defeated across Iraq. Battles are still awaiting in from Tel Afar in the northwest to Hawija and other areas in Anbar Province in western Iraq. And even when these are retaken, ISIS continues as an insurgency that no longer functions at a local level but at a wider regional and global one. Its ideology is strategically shaped by a meta-narrative that cannot be countered by any single national power, local or regional actor, or even religious opponent. The Caliphate will soon fall with the end of its Caliph, but its ideology — we are the true Islam, fighting heretics and unbelievers — does not.

Feelings are mixed because everyone is aware of massive challenges ahead, politically, economically, and socially. These include the conflicting interests of the forces fighting on the ground, as well as those ofregional and international actors often seen as destabilizing Iraq as a state and as a nation.

Smiles are mixed with tears, and optimism mixed with fears, because of Daeshism, militias/tribes, and corruption.

Daeshism (Daeshia or Daeshna in Arabic) is derived from Daesh — the Arabic acronym for ISIS — but Iraqis have coined it to refer to any practice committed or supported by any actor in the state or the society to subjugating an “other”. It is the the attempted suppression of beliefs, ideas, behavior, and appearances on religious grounds. Like ISIS, it employs the same meta-narrative of us vs. them, going beyond sectarian differences to broadly include individual liberties seen as unacceptable according to religious interpretations. The recent kidnap, torture, and murder of young artist Karar Nushi, merely over his appearance, is just the latest in a series of heinous crimes in an unprecedented threat to civil liberties.

These deeds are nurtured by a radical religious discourse, be it Shia or Sunni, targeting not just different people but also art, music, singing, and dance, as haram to be banned. Leaders of Islamic parties are deliberately distorting concepts such as secularism and civil society, tarnishing them as atheism that must be fought. The radical religious discourse has made its way to educational institutions, both in theory and in practice, and to some of the textbooks in the national curriculum.

Daeshism reflects the mindset of sections of Iraqi society and of Arabic Islamic societies in general. Although they may denounce ISIS’ practices as acts of terrorism, they still — sometimes unconsciously — oppose and even oppress people or actions that do not fit their religious stipulations. The dilemma for many lies in this contradiction. As the Iraqi analyst Nibras Kazimi summarizes, “Middle Easterners need to fundamentally re-engineer their societies, economies and cultures.” Small steps have been taken on this path by some intellectuals, activists, and religious reformists, but these remain scarce and unconnected.

The role of militias and tribes has been empowered across the country since the security vacuum following the Islamic State’s capture of Mosul in June 2014. In many areas of Baghdad and the south, in particular, their power and influence exceed the already-vulnerable authority of the state. Gang crimes, including kidnappings, theft, murder, and rape, have been on the rise in the capital and southern provinces. In most cases, the perpetrators are unknown and unaccountable.

The intervention by militias and tribes also challenges the stability of public institutions and those who work in them. Doctors have been threatened by tribes if a patient passes away. University lecturers are hindered in their duties when their lives are at stake from militia or tribal threats.

Corruption is often equated by Iraqis with the Islamic State, and corrupt leaders with terrorism. In a recent survey by the National Democratic Institute (NDI) across Iraq, participants said they viewed corruption as the main underlying cause that gave rise to ISIS. It is also corruption that has led to a weakening state of law, fragile governance and security, and flawed military, judicial, political, economic, health, and educational institutions. If corruption is not substantially addressed, ISIS, the threats of militias and tribes, and Daeshism will linger.

Contrary to the common conception that the solution starts with the government, it starts with the Iraqi society. A bottom-top approach has to be effective for a real change, rather than waiting for a top-down salvation. Iraqis need a societal collective effort to combat corruption, with upcoming elections as an opportunity towards the goal.

The liberation of Iraqi lands, with the sacrifices that it has required, must not be squandered. This time pride must be lasting.