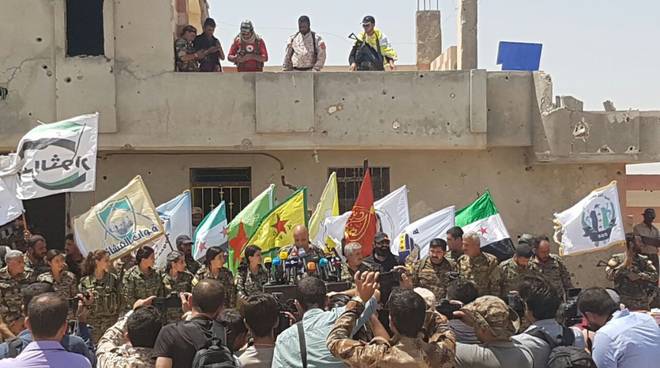 In a sign of Russia’s concern about the advance of the Kurdish-led Syrian Democratic Forces in northern Syria, Moscow’s State outlet Sputnik has assailed the SDF as “terrorists” just like the Islamic State.

As the SDF took more areas inside the city of Raqqa, the Islamic State’s central position in Syria, Sputnik aimed at it with an article and tweet:

The Russian shift appears to be prompted by the move of pro-Assad forces in northern Syria towards SDF-held territory, including the city of Tabqa, 40 km (25 miles) west of Raqqa. On Monday, the Russian Defense Ministry announced the capture of three villages — turning them into “large cities” — by the Syrian military and Iranian-supported militias.

Sputnik based its article on an interview with “Syrian expert” Husma Shaib:

In Syria, we regard these forces as unlawful military formations which operate outside of the legal environment. They are the same a terrorist units like al-Nusra Front and Daesh. The Syrian Democratic Forces do not coordinate their activities with the Syrian Army. We regard them as terrorists.

According to the plot of the US, these forces should assist in the implementation of their plan on the setup of the so-called safe of buffer territories, which should cut Syria off from its neighbors.

Curiously, Shaib said the SDF is coordinating its assault not only with the US but with ISIS — the target of their attacks on Raqqa. He did not explain this paradox, although other pro-Assad polemicists and Iranian military outlets have proclaimed that the SDF is allowing ISIS fighters to flee Raqqa, so they can fight the pro-Assad forces.

The “expert” appealed for Moscow’s intervention: “With the help of Russia and Iran, the Syrian Army will be able to block these efforts.

Russian propaganda initially welcomed the SDF’s rollback of the Islamic State in northern Syria from late 2015, as Moscow sought cooperation with the Syrian Kurdish Democratic Party (PYD). In February 2016, Sputnik was a cheerleader for the Kurdish-led offensive.

However, as the Kurdish military success and maneuvers of the PYD have furthered the prospect of an autonomous Syrian Kurdistan — an arrangement fiercely opposed by the Assad regime — Moscow has begun to show its concern. Sputnik frames the situation in its Monday article:

The leaders of the SDF announced that they’ll try to annex the majority-Arab city of Raqqa if they manage to liberate it.

In its turn, the Syrian Arab Army, the land force branch of the Syrian Armed Forces, is fighting to keep the existing territory of the country intact….

The liberation of Raqqa is so important for Syria’s future because whichever force frees the city will be in a stronger position to determine post-war political events in northeastern Syria, or in other words, either making the Kurds’ “federation” a fait accompli or not.

On May 31, Sputnik introduced its anti-SDF campaign in its German outlet, using another declaration from Shaib: “Syrian Demoratic Forces Are Also Terrorists“.