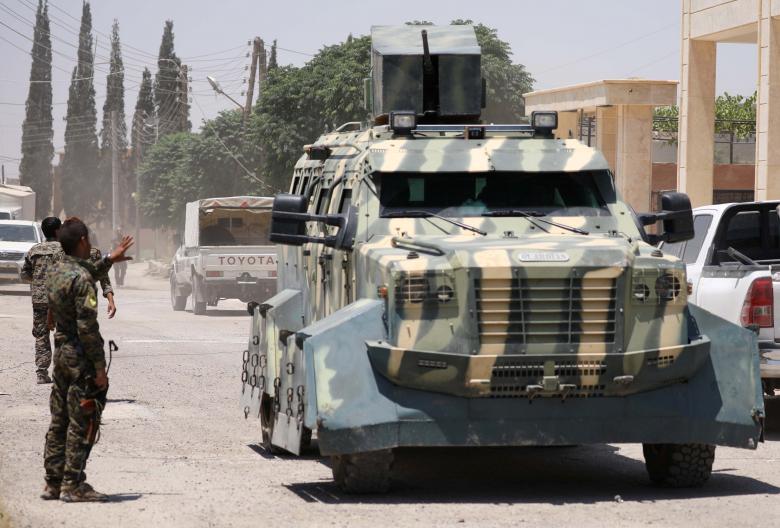 The US-supported, Kurds-led Syrian Democratic Forces have advanced inside ISIS-held Raqqa in northern Syria, reportedly reaching the walls of the Old City.

The SDF entered the outskirts of Raqqa, the Islamic State’s central position in Syria, a week ago. They have steadily taken areas in the west and east. On Monday, they moved into the al-Sanaa industrial neighborhood in eastern Raqqa to reach the 8th-century walls.

An SDF spokesman said the Forces, led by the Kurdish militia YPG, were still in fierce clashes in al-Sanaa and the area was not secured. Residents reported intense shelling.

To the northeast of the city, the SDF captured a sugar factory complex, tightening their grip around Raqqa.

The SDF first announced the offensive on Raqqa in November, but it was delayed for months by political wrangling. Turkey, which considered the Syrian Kurdish Democratic Party (PYD) and its YPG militia to be part of the Turkish Kurdish insurgency PKK, objected to any Kurdish leadership of the assault.

However, this spring the US overrode Ankara’s objections and backed the SDF advance with airstrikes, heavy weapons, and special forces. More than 200,000 people fled the area around Raqqa, while hundreds were killed, many of them in US airstrikes.

Clashes Between Kurdish Militia YPG and Rebels in Northwest Syria

Fighting is reported in northwest Syria between the YPG and rebels.

#Breaking news: fierce clashes between the rebels and #YPG in the outskirts of Darat Ezza town, western countryside of #Aleppo#AleppoAMC

The YPG claimed that it killed 28 “Turkish mercenaries” who attacked in the Kurdish-declared Afrin canton. Pro-opposition sources said 30 YPG fighters and 16 rebels were slain.

The Kurdish National Council declared that Turkish-supported rebels of displacing hundreds of Yezidi civilians from the village of Elî Qîno, giving them one hour to gather belongings before properties, livestock, and furniture were confiscated.

A crossing on the Turkish-Syrian border is opening for the first time in almost two years, but only for a month.

Hundreds of Syrians residing in Turkey re-entered their country for the Eid holiday on Tuesday, with up to 50,000 expected to pass through the Bab al-Salama crossing over the next 10 days. 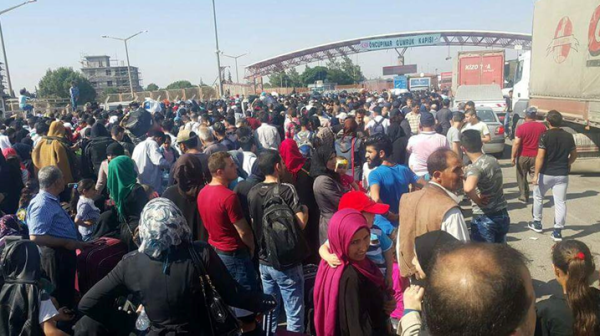 The Bab a-Salama crossing has been closed to civilians since October 2015, when the Islamic State held nearby territory. Even though ISIS was pushed back months ago by a Turkish-supported rebel offensive, Ankara — which host almost 3 million refugees — has not reopened the border in an attempt to limit further movement.

Syrians may re-enter their home country for less than $1 between June 13 and June 23 and return to Turkey between June 28 and July 14, when the border will again be sealed.

The opposition-run Daraa Local Council has declared the city and its surroundings disaster areas because of the Assad regime’s “scorched-earth policy” with intense aerial and ground attacks.

The council issued a statement that “all hospitals in liberated Daraa city have been targeted and destroyed by the regime”. It called on international organizations to send relief and aid to civilians. 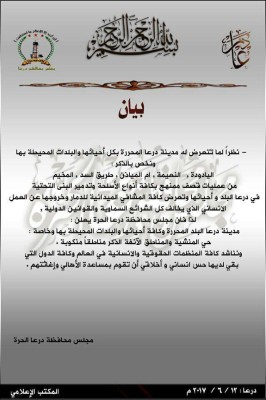 The Assad regime and its allies have bombed and shelled the opposition part of the divided city for years, but they have stepped up the attacks over the past 10 days. The Syrian military and foreign militias are hoping to check a rebel advance that has taken most of the key Manshiyah district and to launch a counter-offensive to overrun the opposition areas.

Daraa is the birthplace of the Syrian uprising from March 2011, with protests challenging the detention and abuse of teenagers who sprayed anti-regime graffiti on walls.

Fire burning after a regime attack on Tuesday:

#Daraa: extinguishing a fire ignited by an incendiary bomb (remains of substance at 0:50) as city is under constant Regime bombardment. pic.twitter.com/ctuBSi4y4C

Claims are circulating that people in Suweida Province in southeast Syria have protested over the detention of human rights activist Gibran Murad.

Photographs purport to show the burning of the police headquarters after Murad, held in 2011 at the outset of the Syrian uprising, was re-arrested.