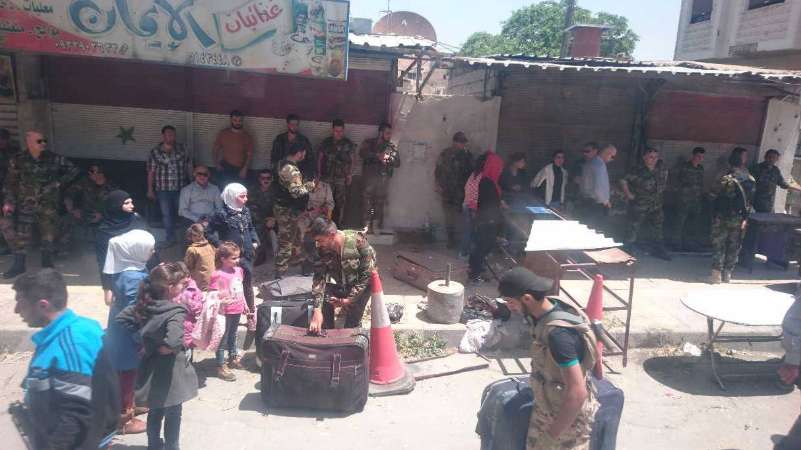 Reports are circulating that a forced removal agreement has been reached for the Damascus suburb of Barzeh, besieged and bombarded for months by pro-Assad forces.

About 8,000 rebels and residents are to be transferred from the town, northeast of the capital. About 1,500 people will depart in the first wave for northwest Syria.

The forced displacement is expected to start tomorrow. Approximately 1,500 people will depart on buses to rebel-held Idlib.

The regime had loudly proclaimed a “reconciliation” deal with Barzeh in early 2014, supposedly bringing an end to fighting, but Damascus and its allies renewed attacks early this year, as well as on nearby Qaboun — also breaking a “reconciliation” arrangement — and Tishreen. Many areas in the towns are now destroyed.

Pro-Assad sieges, lasting years, and assaults have forced a series of capitulations since last summer. Darayya, Moadamiya, and nearby towns finally submitted southwest of Damascus, as the regime and its allies secured links between the capital and key military bases. Al-Wa’er in Homs city gave way this spring, with about 20,000 of its 50,000 population removed. In the largest transfer, more than 50,000 left east Aleppo city after it was occupied by pro-Assad forces last December.

Despite Russia’s proclamation of four “de-escalation zones” last Thursday, including the Damascus suburbs, the pro-Assad airstrikes and ground attacks are continuing on Qaboun.

Rebels try to check a pro-Assad attack near the Qaboun Electric Station:

1st Aid in Six Months to Camp Near Jordanian Border

Aid has been delivered to the Rukban camp on the Syrian-Jordanian border for the first time in six months.

Two deliveries on Sunday and Monday brought supplies for at least 700 families to the camp of more than 75,000 displaced people.

Nine delivery trucks from Jordan will continue “daily for the next 20 days, until everyone in the camp has received supplies”, Maan al-Awwad, a Free Tribes Army spokesman, said.
Syria Direct obtained photos from al-Awwad showing volunteers inside the camp distributing truckloads of UNICEF-marked packages to residents on both Sunday and Monday.

The Assad regime’s Foreign Minister Walid al-Moallem has rejected any UN involvement in the four “de-escalation zones” proposed by Russia, Iran, and Turkey.

“There will be no presence by any international forces supervised by the United Nations,” al-Moallem said. “The Russian guarantor has clarified that there will be military police and observation centers.”

Defense Secretary Jim Mattis has said the US owes it to the people of Syria to take a close look at the Russian-Turkish-Iranian proposal for de-escalation zones, but has said there are significant unanswered questions:

It’s all in process right now. Who is going to be ensuring they’re safe? Who is signing up for it? Who is specifically to be kept out of them? All these details are to be worked out and we’re engaged.

Mattis, who is attending a meeting in Copenhagen of the anti-Islamic State coalition, said, “We’ll look at the proposal, see if it can work. Will it affect the fight against ISIS? I think the international community is united in the sense of wanting to see ISIS put on its back foot.”

Despite an apology from one Russian State outlet over disinformation trying to shift blame from the Assad regime’s April 4 chemical attack, another outlet is continuing to post the false article.

Sputnik withdrew the disinformation, fed by a “military source” to RIA Novosti, that Al Jazeera had filmed “staged videos” of shelling and airstrikes — including with “toxic substances” — on Saraqeb and Jisr al-Shughour in Idlib Province last week.

Sputnik was pressed into its apology by a threat by Al Jazeera to sue over the allegations (see Sunday’s Syria Daily).

However, Russian outlet TASS posted the same story — this time citing the Russian Center for Reconciliation inside Syria — two days after Sputnik’s admission of wrongdoing. The article is still live on the website.

The Russian campaign is trying to divert from the deadly regime nerve-agent assault, carried out by a missile dropped by a regime jet, that killed at least 93 people and wounded almost 600.

Footage of ongoing bombardment of Latamneh in northern Hama Province, despite the supposed Russian-Turkish-Iranian de-escalation zones:

#Syria: what looks like a "de-escalation zone" on 2nd day of implementation? Example of #Lataminah in N. #Hama countryside. pic.twitter.com/2WVR2GeM2Y

Pro-Assad forces have not halted attacks in northern Hama, as well as on the Damascus suburb of Qaboun, in the hope of completing advances amid the supposed implementation of de-escalation (see Sunday’s Syria Daily).