Syria Daily: 1st US Support of Rebels With Airstrikes on Pro-Assad Forces 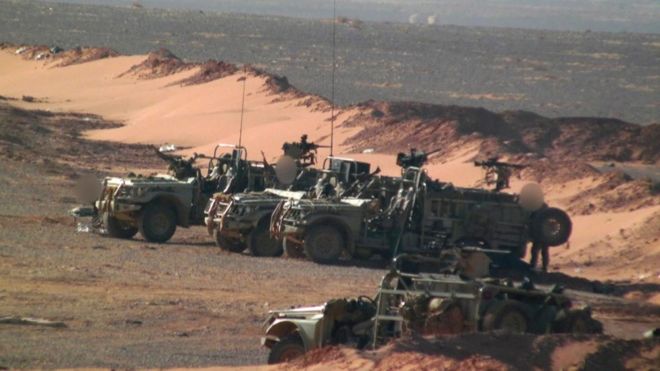 UPDATE 1245 GMT: The Assad regime has acknowledged the US strikes on its forces and allies while downplaying the attack.

A “military source” said Thursday’s strikes hit “one of our military points”, calling the raid “brazen” and warning that it undermined claims of a fight against “terrorists”:

On Thursday at 16:30, the so-called international coalition attacked one of the Syrian Arab Army’s positions on the Al-Tanf road in the Syrian Badia region, producing a number of martyrs and causing material damage.

This brazen attack by the so-called international coalition exposes the falseness of its claims to be fighting terrorism.

ORIGINAL ENTRY: The US has carried out its first airstrikes in support of Syria’s rebels against pro-Assad forces.

American warplanes struck a convoy near the town of Tanf, close to the Iraq border, on Thursday. The area is near a base for Free Syrian Army units, trained and supported by US special forces.

US defense officials confirmed the attack. One said, “They were potentially probing to see how close they could get to At Tanf,” the official said.

Local sources and a Free Syrian Army fighter said the convoy included Hezbollah fighters, Iraqi militiamen, and even Iranian troops. The US warplanes attacked when the force was about 27 km (17 miles) from the base.

The sources claimed that at least one tank — some accounts claimed up to four armored vehicles — and engineering trucks were struck.

Claimed video of the pro-Assad forces hit by the strike, with observers claiming they are Iraqi militiamen:

“We notified the coalition that we were being attacked by the Syrian army and Iranians in this point, and the coalition came and destroyed the advancing convoy,” said Muzahem al Saloum of the Maghawir al-Thagwa faction.

A “Western intelligence official” said the strike sent a strong message to Iranian-backed militias that they cannot reach the Iraq border from Syria.

There was no indication that the defensive strike would lead to a US shift supporting any rebel offensive against pro-Assad forces, rather than the Islamic State.

US Defense Secretary James Mattis said, “No. We are not increasing our role in the Syrian civil war. But we will defend our troops.”

A rebel fighter emphasized, “The coalition has made it clear that fighting Iranians and the regime is not their mission.“They must remain neutral in our battles with the regime—they must only fight the Islamic State.”

Averting a Showdown in the East?

In recent months, the Free Syrian Army has cleared the Islamic State from much of eastern Syria and its desert, taking more than 2,500 square km of territory.

However, the Assad regime is also eyeing the region, the Badia, hoping to establish a link with forces in Deir ez-Zor Province who have been surrounded by the Islamic State since 2014. The area was declared a military priority by Syrian Foreign Minister Walid al-Moallem earlier this month..

Rebels warned last week that hundreds of pro-Assad troops with tanks had moved to the town of Sabaa Biyar, in the Badia and near the Damascus-Baghdad highway.