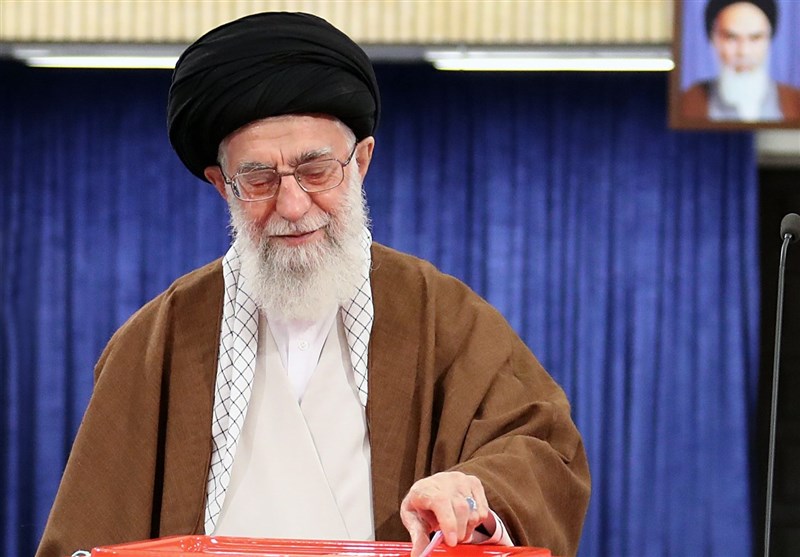 UPDATE 1200 GMT: A report from an EA correspondent in Iran’s capital:

Today Tehran has been prominent in supporting reformists. After the emphasis of the reformist leaders — in particular, [former President Mohammad] Khatami — on the participation of people in the election and supporting Rouhani, the polling stations around Tehran became very busy.

I have been informed that some stations have run out of ballot papers. I was in the queue for more than an hour before I could cast my vote.

The majority of people who were at my station, which was a mosque, voted in favor of Rouhani.

In today’s Friday Prayer, Ayatollah Movahedi Kermani emphasized that the future President must follow the Supreme Leader and [the Iranian system of clerical supremacy] of Velayat Faqih not only in words and slogans but also in practice: “He should not act in such a way that the enemy would think that there are two leaderships in this country.”

In my view, this means that hardliners expect Rouhani’s victory, even before the voting is over.

That hardline expectation of the President’s re-election may also be indicated by allegations from the campaign headquarters of the main challenger, hardline cleric Ebrahim Raisi, of widespread violations.

Videos have shown crowds chanting in support of the reformists as Mohammad Khatami cast his vote:

The line outside Hosseinieh Ershad polling station in Tehran:

Polls close at 6 pm (1330 GMT), but voting hours have been extended in the last two Presidential contests and are likely to be moved tonight.

The Supreme Leader was among the first voters, saying, “You see [Iranians] are participating and my advice is that more and more people participate and come to the polls at the earliest time possible….The destiny of the county is in the hands of the people who choose the chief executive. They should heed the importance of this task.”

The economy is the primary issue in the election, with Rouhani touting recovery after the 2015 nuclear deal with the 5+1 Powers, pointing to the reduction in inflation from more than 40% to under 9%, and declaring the need to encourage more investment from inside and outside Iran.

His critics, including Raisi, have asserted that few Iranians have benefited from the growth after the nuclear deal, with the official unemployment rate at 12.7% and “real” numbers likely to be higher. They have alleged mismanagement and even corruption among Rouhani and his allies, declaring that they are “the Government of the 4%”.

Rouhani has hit back at the allegations, pointing to the economic downturn under his predecessor Mahmoud Ahmadinejad — many of whose advisors are now in the Raisi campaign — and Raisi’s tax-free status as the head of the billion-dollar Astan Quds Razavi religious foundation.

Beyond the economy, the campaign has been marked by the battle between Rouhani and the regime factions, including those around the Supreme Leader, trying to block his re-election.

Ayatollah Khamenei has implicitly aimed at the President over the past month, chiding Rouhani’s approach of economic recovery linked to engagement with foreign interests for trade and investment. Khamenei has countered with his “Resistance Economy” of self-sufficiency and called on all candidates to promise “not to rely on foreign powers”.

The Supreme Leader has also chided the Government over its interaction with international organizations, such as the UN educational body UNESCO, claiming that they are dominated by foreign powers hostile to the Islamic Republic.

Rouhani has countered with the warning that his defeat will bring the return of “repression” to Iran, invoking the mass detentions and suppression of political activity after the disputed 2009 Presidential election. Crowds at his rallies have upheld the former President Mohammad Khatami, banned from any appearance in Iranian media or travel abroad, and the detained opposition leaders Mir Hossein Mousavi and Mehdi Karroubi with loud chants, singing, and a roar of applause when their images are shown on big screens.

In an unprecedented campaign challenge to the Revolutionary Guards, Rouhani has criticized them for isolating Iran through ballistic missile tests, including provocative slogans on the missiles. In his final campaign speech, the President said the Guards and the paramilitary Basij should “stay in their own place for their own work” and not interfere in the election.

Rouhani’s closing speech appeared to be an implicit message to regime elements not to manipulate the outcome, as in 2009.

The prospect of that manipulation has been raised not only by a close race and the conservative-hardline rally around Raisi, with Tehran Mayor Mohammad Baqer Qalibaf dropping out and endorsing the cleric earlier this week, but by a curious intervention by the Supreme Leader on Wednesday.

Ayatollah Khamenei declared, “Some may seek to commit fraud in this [election]. The Iranian people have enemies. In the face of the enemy, the people’s countenance should indicate will power, conviction, self-confidence, calm and equilibrium.”

The Supreme Leader’s statement appeared to be an attempt to shift the burden of any claims of fraud if there was intervention to ensure a Raisi victory.

TOP PHOTO: Supreme Leader casts his vote at the Imam Khomeini Husseiniya in Tehran, May 18, 2017