Syria Daily: US Turns Down Meeting With UN Envoy and Russia 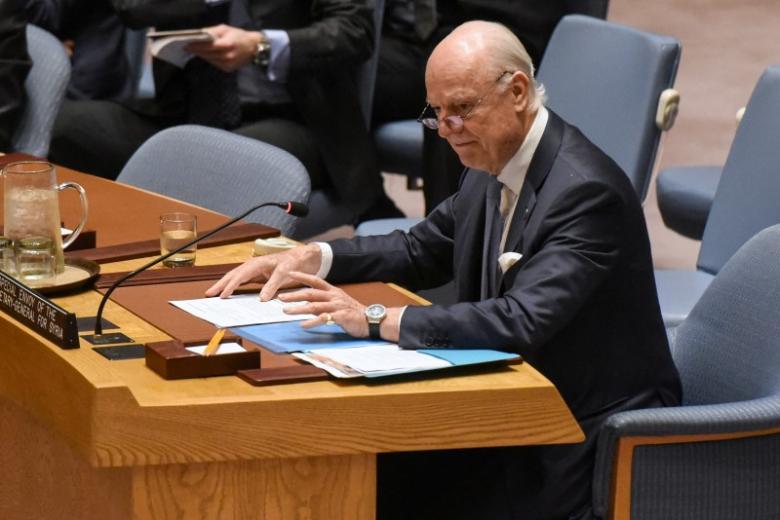 US spokesman: “At this time there is no new trilateral meeting scheduled.”

The US has turned down a possible re-entry into the political process over Syria’s conflict, declining a meeting with UN envoy Staffan de Mistura and Russian Deputy Foreign Minister Gennady Gatilov in Geneva on Monday.

The session was to evaluate the next planned set of indirect talks between the Assad regime and the Syrian opposition, scheduled for May 3-4 in the Kazakhstan capital Astana.

After working alongside the US since 2013 in a claimed attempt at political advance — but one which yielded no results — Russia pushed aside Washington last summer, preferring to deal with Turkey as well as the Assad regime’s other main ally Iran.

De Mistura insisted “the trilateral [meeting] is not off the table, it is just being postponed”, but he gave no rescheduled date.

A US spokesman also held a vague line, “The U.S. welcomes discussions with Russia regarding the UN-led political process on Syria in Geneva, and we have met in the past in the trilateral U.S.-Russia-UN format. But at this time there is no new trilateral meeting scheduled.”

The postponement added to uncertainty over Washington’s approach to Syria after its April 7 missile strikes on an Assad regime airbase. The 59 Tomahawk missiles, targeting the base from which a deadly chemical attack was launched three days earlier, was the first deliberate US attack on a regime position in the 74-month conflict.

But the Pentagon made clear that the operation was only to deter further use of chemical weapons by the Assad regime, and gave no indication of any action against the Russian and regime “conventional” bombing — including with incendiary, thermobaric, and cluster munitions — that have killed many tens of thousands of civilians. Since April 7, that bombing has escalated with no response from Washington.

The resumption of indirect talks from late January between the regime and the opposition, in Astana and Geneva, have brought little progress. President Assad has rejected any transitional process in which he leaves power, and the regime has also not responded to opposition conditions for the release of political detainees and an end to sieges. Instead, Damascus — with Russian and Iranian assistance — has pressed for more arrangements for the removal of rebels and residents from opposition areas.

But De Mistura insisted there had been an advance, since technical talks in Iran, with “some type of movement regarding the issue of detainees…and on possible issues related to demining as well”.

In Russia’s latest attempt to divert blame from the Assad regime for the deadly chemical attack in northwest Syria on April 4, Foreign Minister Sergei Lavrov has dismissed evidence as part of an attempt for “regime change”:

I think that this is a very serious situation, because it is evident now that the false information about chemical weapons use by the Syrian state is being used to avoid enacting resolution 2254 that stipulates a political settlement. Instead, there is a move towards the long-standing plan for regime change. I’m certain that we must prevent it.

Lavrov claimed that a Russian proposal for a visit by chemical weapons inspectors to Khan Sheikhoun, the site of the April 4 attack that killed at least 93 people, had been rebuffed — ignoring that it was Moscow who vetoed a UN Security Council resolution for the Assad regime to cooperate with the Organization for the Prohibition of Chemical Weapons.

China, who had supported Russian vetoes of six of seven previous occasions over Syria resolutions, abstained in the vote.

I can say authoritatively they [the Assad regime] have retained some [chemical weapons]. It’s a violation of the United Nations Security Council resolutions and it’s going to have to be taken up diplomatically and they would be ill advised to try to use any again. We made that very clear with our strike.

A Russian marine major has been killed in combat in Syria, according to the Defense Ministry.

Major Sergei Bordov was killed during an attack on a garrison on Tuesday.

“They were caught in shell fire. Two of our Russian servicemen and two Syrian soldiers died,” Vyacheslav Pavlyuchenko, who has served with Bordov, told Reuters.

Bordov is one of the highest-ranking Russian officers killed in Syria. In early March, Major-General Petr Milyukhin was seriously wounded by an Islamic State IED near Palmyra, losing both legs and an eye.

Earlier this week, Reuters reported that 21 Russian personnel — comprising regular troops and private military contractors — were killed in Syria between late January and the end of March. The Defense Ministry, which had confirmed only the deaths of five soldiers in that period, responded with a bitter denial (see Thursday’s Syria Daily).

The Ministry has acknowledged the loss of about 30 personnel since Russia’s military intervention in September 2015.

Rebels had taken about 25 towns and villages in northern Hama in an offensive last month, moving within 5 km (3 miles) of both Hama city and Hama airport at one point. However, the Russian airstrikes, with the use of incendiary and thermobaric munitions, enabled a counter-offensive — including Iranian-led foreign militias — which has reclaimed almost all the territory.

The pro-Assad assault is now hoping to regain towns along the Damascus-Aleppo highway, including Morek, and is attacking other areas such as Halfaya and Latamneh.

Bombing of Halfaya on Friday morning: