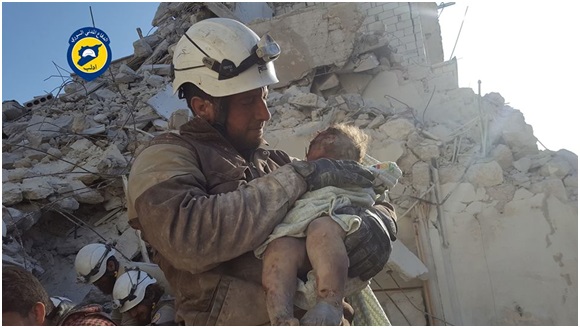 More than 180 White Helmets killed since 2013, mainly by Russia bombing, amid systematic campaign to destroy medical services and civil defense

How Syria’s Conflict Changed the World

At least eight White Helmets rescuers have been killed in the latest Russian and regime airstrikes trying to decimate medical services and civil defense in northwest Syria.

The attack was on Kafrzita in northern Hama Province, where Russia and pro-Assad ground forces are hoping to overrun opposition territory after intense bombing, including with incendiary and thermobaric munitions. The White Helmets said five bodies have been recovered from the rubble and surviving rescuers are looking for others.

More than 180 White Helmets have been killed by pro-Assad attacks, mainly Russian bombing, since the group was organized in 2013. Despite the threat, including “double taps” strikes in which rescuers are targeted as they respond to an initial bombing, the volunteers have saved more than 90,000 lives.

The killing of rescuers has increased as Russia and the regime stepped up the systematic campaign to destroy any medical and civil defense system in Hama, Idlib, and western Aleppo Provinces. Since January 1, there have been at least 40 strikes on medical facilities, including at least 15 in the month of April.

TOP PHOTO: A White Helmets volunteers rescues a baby after a pro-Assad bombing in Idlib Province, May 2016

Scores of rebels have reportedly been killed by in-fighting in the embattled East Ghouta area near Damascus.

Jaish al-Islam and Failaq al-Rahman, the leading rebel factions, have been clashing since Friday. There are unconfirmed claims of at least 74 deaths. Elements of the Hay’at Tahrir al-Sham bloc, which includes Jabhat Fatah al-Sham, are also supporting Failaq al-Rahman.

Both sides issued statements calling for a halt to the clashes. Jaish al-Islam called for Failaq al-Rahman to “contain” the situation, saying its dispute is with Hay’at Tahrir al-Sham. Failaq al-Rahman said the fighting was not in the interests of East Ghouta or the Syrian revolution.

Both sides also fought last year, as pro-Assad forces advanced in East Ghouta, before an uneasy settlement was brokered.

Since spring 2016, pro-Assad airstrikes and ground assaults have led to the capture of much of East Ghouta. In recent months, the offensive has been trying to take the Damascus suburbs of Barzeh, Qaboun, and Tishreen, while the central opposition position of the town of Douma is under sustained bombardment.

The head of the Organization for the Prohibition of Chemical Weapons says his inspectors are investigating 45 alleged chemical attacks since late 2016.

Director General Ahmet Uzumcu told journalists, “[In the] second part of 2016, 30 different incidents, and since the beginning of this year, 15 separate incidents,” as he held a confidential document of several pages.

Although Uzumcu did not give any attribution of possible responsibility, all evidence of recent chemical attacks points to the Assad regime.

The director general did refer to the OPCW inquiry into the April 4 missile strike on Khan Sheikhoun in Idlib Province, which killed at least 93 people and injured 600 when an Assad regime Su-22 jet fighter fired a munition with “sarin or a sarin-like substance” into the town.

Despite nominally supporting an international investigation, Russia blocked a UN Security Council resolution mandating the Assad regime to cooperate with the OPCW.

Uzumcu said last week that there was “incontrovertible” evidence of the use of sarin or a similar nerve agent in Khan Sheikhoun.

The director general said on Friday that the Assad regime was now declaring “that it would support this mission, actually it has invited us to go via Damascus”, but that arrangements needed to be arranged for a “temporary ceasefire” to permit the investigation.

However, analysts said the evidence from the site may now be degraded because of the initial blocking of the investigation.