TrumpWatch, Day 100: March to Protect the Earth from Trump 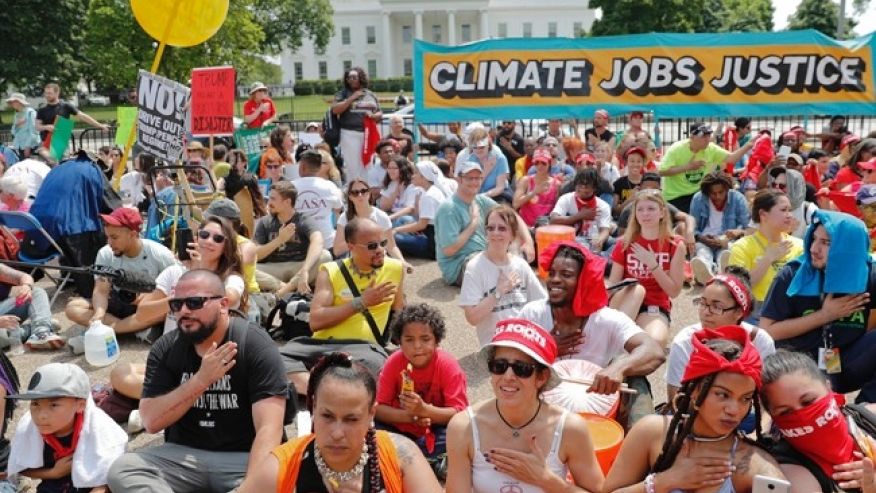 10,000s participate in People’s Climate March to call out Trump — “Resistance is here to stay, welcome to your 100th day.”

Developments on Day 100 of the Trump Administration:

The March for the Earth v. Trump

Tens of thousands of marchers greet Donald Trump on his 100th day in office with a rally to protect the environment from the Administration’s policies.

In Washington, the People’s Climate March from the Capitol to the White House, letting out a collective roar to symbolically drown out the climate change denial of Trump and his leading advisors. They chanted: “Resistance is here to stay, welcome to your 100th day.”

In front of the WH, a different 100 day message for Pres. Trump: "Resistance is here to stay, welcome to your 100th day" protesters chant pic.twitter.com/CGHc07iOgk

The rallies in Washington and hundreds of other cities had been planned before the election to mark the new President’s 100th day, but took on further significance amid the Administration’s policies to strip away environmental protections. Trump has claimed that climate change is a hoax promoted by China, while the anti-EPA head of his Environmental Protection Agency, Scott Pruitt, has denied that carbon dioxide emissions are linked to global warming.

The Administration is split in a debate on whether to withdraw from the 2015 Paris Accord, a commitment by almost 200 countries to limit emissions. Trump’s hard-line chief strategist Steve Bannon and Pruitt are reportedly squaring off with Trump’s daughter Ivanka, her husband and senior White House advisor Jared Kushner, and Secretary of State Rex Tillerson.

Meanwhile, Pruitt and his White House allies have continued their assault on the EPA, removing several websites. One challenged the climate change denials and another that gave detailed information on the Clean Power Plan pursued by the Obama Administration, including fact sheets about greenhouse gas emissions at state and local levels and the effects on different groups of people.