Damascus Beyond the Propaganda: “Iranians Are First. And the Russians Are Gods” 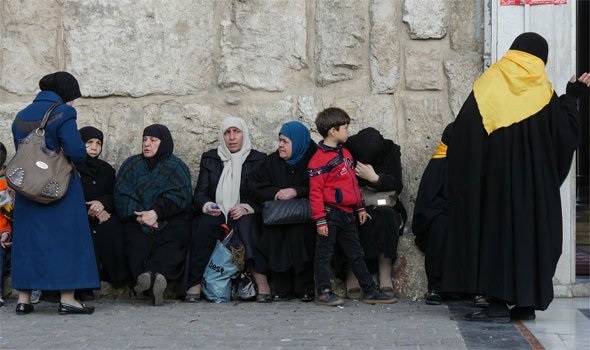 Writing for The Guardian, Ruth Maclean cuts through illusions and propaganda for a snapshot of life in Syria’s capital Damascus after more than six years of conflict:

Waiters dressed for the 1930s, with pencil moustaches and slicked-back hair, spoon tabbouleh on to the plates of women who take drags on shisha pipes at the grand Selena restaurant in Damascus’s old city.

Two wedding celebrations are also under way. A singer croons in Arabic: “I love you, but that doesn’t mean I’ll stay with you.” One of the brides gets up and sways, her blue dress decorated with thousands of crystals shaped into glittering claws clinching her bare back.

There is no sign that a war is on, that half a million people have died, that half of Syria’s population is displaced.

A few days after the celebrations, just a mile away, 74 people are killed in a double suicide bombing. Most of the victims are Iraqi pilgrims visiting a holy shrine. Days after that, rebels in the suburbs manage to tunnel into government-held areas, and fierce fighting ensues.

But the tiara shops remain open, and the tinkle of water in the city’s marble fountains is only occasionally drowned out by the sound of jets overhead, on their way east to the besieged rebel stronghold of Ghouta, or to Homs.

After six years of war, people go about their business in Damascus but keep their heads down as peace stops and starts around them. Shops shut early; creepers grow over the doors of the capital’s hammams, or public baths. A thin sheen of normality coats the menace in what used to be a vibrant, friendly city.

“All the good people have gone,” says a businessman who asked not to be identified. “You should have been here before the war. It was so different. What’s changed is the people.

“I tried living abroad, but I hated it. This is my homeland. But I am a second[-class] citizen here. Syrians are second now. Iranians are first. And the Russians are gods.”

The Shrinking of the Economy

Rampant inflation has made life extremely expensive. Mohammed Dahabi, a kindly optician with a tight belt round the middle of his belly, says people are surprised to find glasses cost so much more than they used to. “You have to explain to people – an egg used to cost 20 Syrian pounds, now it costs £S60. And glasses have to be three times the price now too – it’s the same.”

Some of his customers have made a lot of money out of the war, he says. “You can see it in whether they try to negotiate the price. If he says ‘oh, that’s expensive’, and asks if you can reduce it – it’s his own money. If he just pays for it, you see that he has not worked hard to get that money.”

But most are struggling to get by. “Expenses now are unbelievable,” says 26-year-old Nour Shamah, who works as a hairdresser to help her mother pay rent. She is sitting in the carpeted Umayyad mosque, full of people who come to think and pray. Twenty-year-old Abir al-Ahmad plumps down next to her in a grey hooded robe. They have never met before, but they get to talking about men.

“Maybe I won’t find a husband,” says Shamah. “They’re all gone. All the good ones.”

“The atmosphere right now doesn’t allow any love stories anyway,” Ahmad replies. “It would be a cold life. It wouldn’t be a happy marriage, because one person couldn’t satisfy the other. Not in war.”

Many of those living in Damascus say they just want the war to be over, and if the price is that Assad stays then so be it.

But these are not the voices of the people in the besieged suburbs. As a journalist travelling to Assad’s Syria, you need permission to go anywhere, and you cannot cross to rebel-held territory. There are limits on who you can talk to.

You can still drive to the old city, buy breakfast from a family-run bakery and take a walk down Straight Street, to where the Bible says Paul the apostle went after he was struck blind. But your cheesy manakish will be served by a child, as the men who used to shovel flatbreads into the brick ovens are dead, fighting or abroad.

And before you get there, you’ll have to get through dozens of checkpoints, manned by soldiers who demand to know your business. Armed men will wave you through Bab Touma, one of the seven gates to the ancient walled city, now plastered with posters of dead Syrian soldiers, while mysterious men with earpieces stand watch outside it.

Armed men, uniformed or not, are now everywhere, another facet of Damascus life that has to be negotiated. Some are soldiers, others are members of the National Defence Forces, a pro-government militia with community branches that locals join.

Two days after the double suicide bomb attack, NDF members stand guard on the pavement, a chunk of it missing since the blasts. The buses that had been about to take the pilgrims to the Sayeda Zeinab mosque, Syria’s holiest Shia shrine, are blackened and pocked with shrapnel, but their tyres are being patched up so they can be driven away. A pair of new trainers that belonged to one of the pilgrims still sits under a seat, surrounded by broken glass.

Conspiracy theories abound about who was responsible. “Who do you think did it?” one Syrian asks very quietly, with a twinkle and a tilt of the head. “Maybe Iran? Could be. I don’t know.”

Abu Haatem, an 80-year-old NDF member, had a son who was killed in the second blast, but a day after the funeral he is out in his uniform. “There is still power in me,” he says.

“I am defending my country. I am ready to fight. All of us are. When they kill one of us, they’re killers, but if we kill one of them, we’re defending our country.”

Women outside the Umayyad Mosque in Damascus (Ruth Maclean/The Guardian)