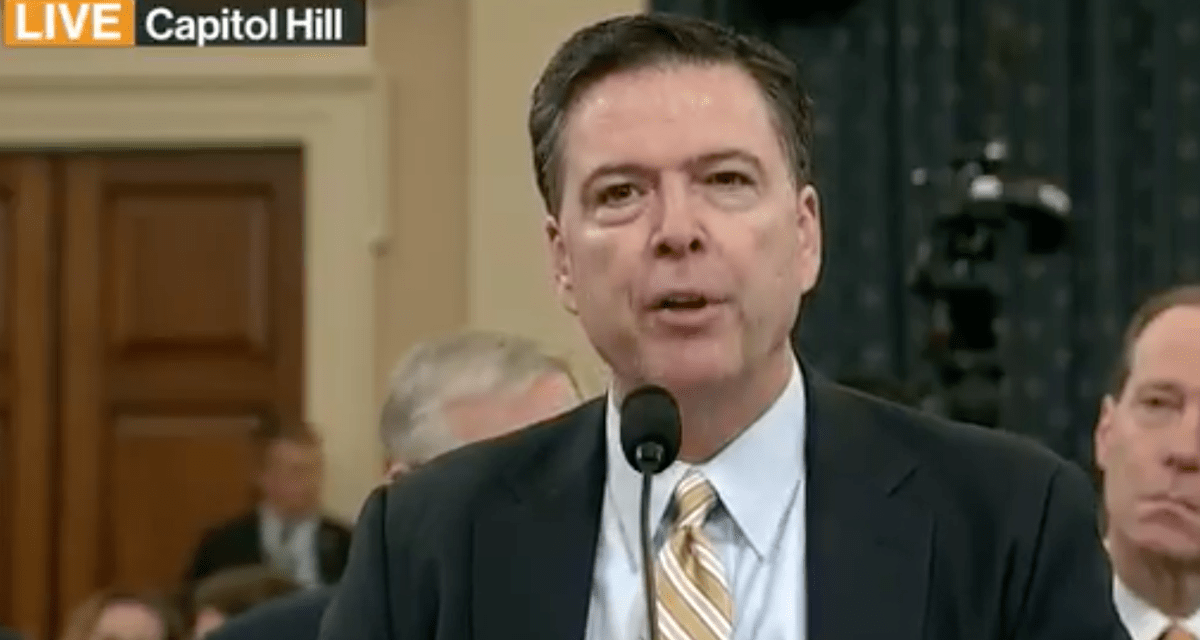 FBI’s Comey: Investigation of “whether there was any coordination between the Trump campaign and Russia’s efforts”

Developments on Day 60 of the Trump Administration:

FBI’s Comey: Investigation of “Coordination” Between Trump Camp and Russia

Speaking at the opening of the House Intelligence Committee’s hearings, FBI Director James Comey confirms an investigation of “coordination” between Donald Trump’s associates and Russian officials.

Pro-Trump Republicans had hoped that Comey would say there was no evidence of collusion — going beyond the contacts between Trump’s advisors and the Russians before and after the November 2016 election — but the Director was firm in his opening statement:

Our practice is not to confirm the existence of ongoing investigations, especially those investigations that involve classified matters, but in unusual circumstances where it is in the public interest, it may be appropriate to do so as Justice Department policies recognize. This is one of those circumstances.

I have been authorized by the Department of Justice to confirm that the FBI, as part of our counterintelligence mission, is investigating the Russian government’s efforts to interfere in the 2016 presidential election and that includes investigating the nature of any links between individuals associated with the Trump campaign and the Russian government and whether there was any coordination between the campaign and Russia’s efforts. As with any counterintelligence investigation, this will also include an assessment of whether any crimes were committed.

Comey emphasized that he could not give any details because of the classified nature of the enquiry; however, his remarks were a firm rebuff to the comments of former Director of National Intelligence James Clapper, made two weeks ago, that he had seen no evidence of Trump-Russia “collusion” — although he added that there was information being gathered by the US intelligence agencies that he might not have reviewed.

The FBI Director and National Security Agency Director Mike Rogers pushed back all efforts by Republican committee members such as Peter King and Mike Turner to declare that there was no collusion, pointing to investigation of a “credible allegation of wrongdoing or reasonable basis to believe that an American may be acting as an agent of a foreign power”.

Comey and Rogers confirmed the conclusion of extensive Russian involvement in the US Presidential campaign, saying that Russia’s operations are continuing in Europe: “You see some of the same things that we saw in the U.S. in terms of disinformation, fake news, attempts to release of information to embarrass individuals, you’re seeing that play out to some extent in European elections right now.”

With respect to the president’s tweets about alleged wiretapping directed at him by the prior administration, I have no information that supports those tweets and we have looked carefully inside the FBI. The Department of Justice has asked me to share with you that the answer is the same for the Department of Justice and all its components. The department has no information that supports those tweets.

During the House Intelligence Committee’s hearing, the White House puts out a series of distortions trying to limit the damage of the testimony.

The NSA and FBI tell Congress that Russia did not influence electoral process. pic.twitter.com/d9HqkxYBt5

Neither Comey nor Rogers made such a statement — the NSA Director said only that no evidence was found of Russia hacking voting machines to alter tallies.

Comey was asked by Representative Jim Himes later in the hearing, “Is the [White House] tweet [that] the NSA and FBI told Congress that Russia did not influence the electoral process — is that accurate?”

The FBI Director replied, “It certainly wasn’t our intention to say that today because we don’t have any information on that subject. And that’s not something that was looked at.”

President Trump’s official Twitter account took Comey’s testimony out of context, in an effort to press the “no collusion” line:

And the White House distorted Comey’s answers to insinuate — without foundation — that the Obama Administration had committed a criminal act by “unmasking” the identity of Trump associates such as Michael Flynn, fired as National Security Advisor after exposure of his conversation with the Russian Ambassador to the US.

Press Spokesman Sean Spicer continued the effort in his press conference during the hearing, trying to focus on James Clapper’s assertion even though it had been overtaken by Comey’s testimony: “Following this testimony it’s clear nothing has changed. Senior Obama intelligence officials have gone on record to confirm there’s no evidence of a Trump/Russia collusion.”

Spicer declared that Paul Manafort — Trump’s campaign manager for much of 2016, who is likely under investigation for his contacts with Russian officials — had “only a limited role”. The Press Secretary also said that Manafort joined the campaign in June: in fact, Manafort was with Trump from March to August 2016.

Manafort, whose company was hired by former Ukrainian President Viktor Yanukovych, has become involved in a new political scandal in Ukraine, with allegations that he hid payments for the work.

Before the hearing began, Trump tried to pre-empt it with a series of tweets, putting out attack points that were later echoed by his GOP defenders on the Intelligence Committee:

James Clapper and others stated that there is no evidence Potus colluded with Russia. This story is FAKE NEWS and everyone knows it!

The real story that Congress, the FBI and all others should be looking into is the leaking of Classified information. Must find leaker now!

Confirmation hearings open for Supreme Court nominee Neil Gorsuch with his statement and those from members of the Senate Judiciary Committee.

Gorsuch, a conservative federal appeals court judge from Colorado, emphasized the need for judicial independence in the face of Donald Trump’s attacks on “so-called judges” who have ruled him on issues such as the “Muslim Ban”.

Despite the challenges, Gorsuch is expected win approval in the Senate.

Questioning of Gorsuch will begin on Tuesday.

The Department of Homeland Security issues a list of 118 local agencies who turned down 206 requests for detention of undocumented immigration.

The 35-page report said 3,083 detainer requests were issued nationwide from January 28 to February 3.

If the accused is undocumented, that is a federal issue which ICE is free to pursue independently.

Ivanka Trump gets an office in the White House and access to secure communications, despite not being an official member of the Executive and saying she would play no formal role in her father’s administration.

Trump’s office is on the West Wing’s second floor, next to senior adviser Dina Powell, who sits on the National Security Council.

Trump’s role, according to her attorney Jamie Gorelick, will be to serve as her father’s “eyes and ears” while providing broad-ranging advice. Last week, she was seated next to Angela Merkel at dinner during the German chancellor’s first official visit to Donald Trump’s White House.

Gorelick said Ivanka Trump will adhere to the same ethics rules that apply to Government officials, even though she is not technically an employee. But ethics watchdogs questioned if the businesswomen will eliminate conflicts of interest, as she serves as a de facto White House advisor.

Trump’s husband Jared Kushner is an official senior advisor to the President.

Tillerson to Skip NATO Meeting, Go to Russia Instead

Secretary of State Rex Tillerson plans to skip a meeting with NATO Foreign Ministers next month, staying in the US for a visit by China’s President and then going to Russia.

Tillerson will skip the April 5-6 NATO gathering in Brussels to attend Donald Trump’s planned April 6-7 talks with Chinese President Xi Jinping at Trump’s Mar-a-Lago resort in Florida, according to four current and former US officials.

Trump has worried NATO allies by referring to the alliance as “obsolete” and criticizing members for not spending at least 2% of GDP on defense. Last week, he incorrectly accused Germany of owing the US “billions” over payments to NATO.