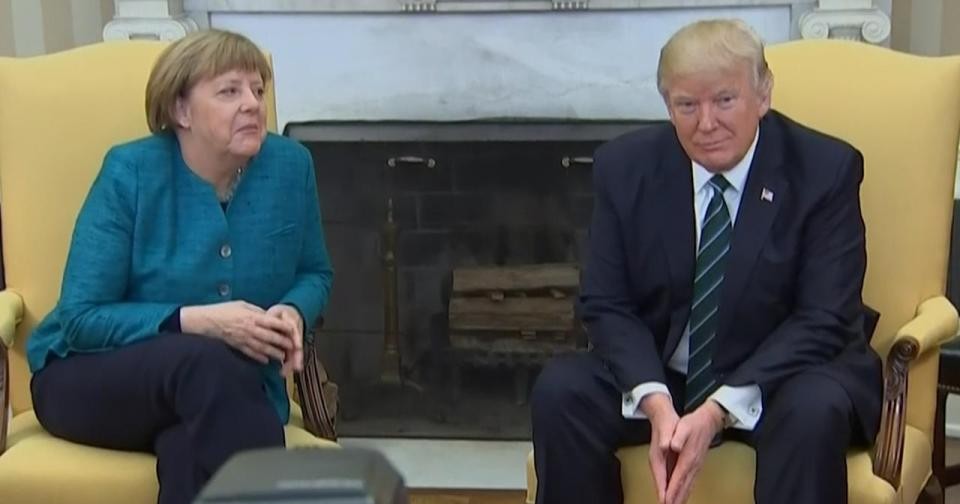 Trump: “Germany owes vast sums of money to NATO. The United States must be paid more”

Developments on Day 58 of the Trump Administration:

A day after meeting Germany’s Chancellor Angela Merkel, Donald Trump lashes out at Berlin in a pair of provocative — and inaccurate — tweets:

…vast sums of money to NATO & the United States must be paid more for the powerful, and very expensive, defense it provides to Germany!

Trump is already in a diplomatic row with the UK, refusing to apologize for his Administration’s unsupported allegation that Britain’s electronic intelligence agency GCHQ — acting on the request of President Obama — wiretapped the Trump campaign in 2016.

His hosting of Merkel in the White House on Thursday was marked by apparent tension. The Chancellor expressed gratitude that Trump, who has said that NATO is obsolete, pledged support for the organization and the Minsk peace process in Ukraine. At the same time, defended her stance on refugees, globalization, and “win-win” trade deals.

Trump insisted that he is a believer in free trade — “I am not an isolationist” — but his officials rebuffed German attempts to discuss details as the President set out an American-first approach to economic issues.

Trump also framed his comments on NATO, “Many nations owe vast sums of money from past years and it is very unfair to the United States. These nations must pay what they owe,” setting up his tweets on Saturday.

Attention on social media has focused on the body language of the two leaders, including an apparent Trump refusal to shake hands with Merkel and to look the Chancellor in the eyes as she spoke. While maintaining outward courtesy, Merkel also appeared uncomfortable with Trump’s demeanor and her place next to the President’s daughter Ivanka at the White House dinner.

Analysts pointed out that Trump either does not understand or is misinterpreting the nature of country contributions to NATO.

In 2014 the organization has set a goal of 2% of GDP on defense spending by each member, a target met only by a handful of the 28 states; however, contributions are based on capability and are not debts that are “owed”.

Ivo Daalder, the US permanent representative to Nato from 2009 to 2013, tried to explain this to Trump in a series of tweets:

Sorry, Mr President, that’s not how Nato works. The US decides for itself how much it contributes to defending NATO. This is not a financial transaction, where Nato countries pay the US to defend them. It is part of our treaty commitment.

Germany is planning a 66% increase in defense spending over the next five years.

6/ Europe must spend more on defense, but not as favor (or payment) to the US. But because their security requires it.

The deputy head of the National Security Agency, Rick Ledgett, says claims of British wiretapping of the Trump campaign are “arrant nonsense”.

Ledgett told the BBC that the allegations — started by Fox News commentator Andrew Napolitano and spread by White House Press Secretary Sean Spicer — show “a complete lack of understanding in how the relationship works”.

Napolitano claimed that GCHQ carried out the surveillance at the request of President Obama so there would be “no American fingerprints on this”. But Ledgett explained that each side is barred from asking its partner to carry out acts that they are prohibited from doing, and that the risks to the UK would outweigh any benefits.

“Of course they wouldn’t do it. It would be epically stupid,” he said.

On Thursday, GCHQ issued a rare public statement that the allegations “are utterly ridiculous and should be ignored”. After US officials reportedly said there would be no repetition of the claims, the White House vigorously denied any apology to the British.

Ledgett said the evidence of Russian involvement in the 2016 US election is “extraordinarily strong” and “irrefutable”, with the NSA’s electronic intelligence playing a key role in establishing the case. He said he was “dead solid 100% confident” that the Russian state was behind the interference.

The Trump Administration warns its allies that it will review trade agreements and pursue an “America first” approach.

Treasury Secretary Stephen Mnuchin gave the message to a meeting of finance ministers and central bankers from the G-20 countries.

Because of the new US line, the joint statement removed references to “open” trade and condemnation of protectionism.

Mnuchin opened Friday’s meeting with the declaration that current trade rules are unfair to the US.

Donald Trump embarrasses his Veterans Administration Secretary, David Shulkin, by touting a “major meeting” on the VA — to which Shulkin was not invited.

Trump promoted the Friday meeting at his private club Mar-a-Lago in Florida because “that seems to be the most convenient location. Everybody always wants to go to the Southern White House.”

He asked Shulkin, “Are you going to be at that meeting?”, and the Secretary shook his head “no”.

Trump: "Major meeting" tonight at Mar-a-Lago to "talk all about the VA"

Will you be there?

The meeting was never held on Friday night, although the White House said Trump “spent the early morning and afternoon [of Saturday] on issues concerning the Department of Veterans Affairs and the military”.

Three Democratic senators are asking the departments of Justice and Homeland Security to investigate whether a White House advisor on national security, Sebastian Gorka, covered up his membership in a Nazi-linked Hungarian organization.

“We are deeply concerned by reports that Dr. Gorka concealed the material fact of his membership in the Vitézi Rend, a far-right anti-Semitic Hungarian organization, when he applied for U.S. citizenship [in 2012],” wrote Richard Durbin of Illinois, Richard Blumenthal of Connecticut, and Ben Cardin of Maryland.

The legislators said they were troubled by the findings of an extensive investigation into Gorka’s Hungarian past by the New York Jewish newspaper Forward. The outlet reported on March 16 that the advisor was a “sworn member” of the Historical Vitézi Rend, “a virulently anti-Semitic organization that operated under the direction of the Nazis during World War II”. The paper said Gorka had taken a “lifelong oath of loyalty” to the organization, according to its leaders.

The senators noted, as have several media outlets, that “Dr. Gorka was photographed wearing a Vitézi Rend medal on several occasions, including at a Presidential inaugural ball earlier this year”.

Another Jewish publication, the Tablet, said Gorka wore the medal only in honor of his father, who was decorated by the Vitézi Rend for being “a dedicated member of the anti-Communist underground.”

Gorka told the Tablet he had “never been a member of the Vitézi Rend” or “taken an oath of loyalty to the Vitéz Rend”.

Gorka was an editor at Breitbart under Steve Bannon, now the White House chief strategist. He has come under fire since the inauguration for a series of incidents, including his haranguing of an analyst in a phone call, amid questioning of his academic and professional credentials.

Tillerson: Journalists Would Have Slowed Down My Plane

Secretary of State Rex Tillerson has defended the decision not to allow journalists to accompany him on his trip to Asia, saying they would have slowed down his plane.

Tillerson told Erin McPike of the right-leaning Independent Journal Review — the only reporter selected by the State Department to travel on the plane — that he is “not a big media press access person”.

Asked whether he is concerned about the the message he is sending, given China’s restrictions on the press, the Secretary said he was saving money because the plane “flies faster [and] allows me to be more efficient” with fewer people on it.

The State Department’s funding has been cut by 28% in the Trump Administration’s first budget proposal.

Tillerson would not commit to bringing a pool reporter on future trips, saying it would be decided on a case-by-case basis. He said there is plenty of media in the cities that he is visiting.

The Secretary’s tour of South Korea and China has been beset by questions about its effectiveness, including confusion over whether Tillerson skipped a State dinner with the South Koreans.

He shrugged off any criticism, “When I have something important and useful to say, I know where everybody is and I know how to go out there and say it.”