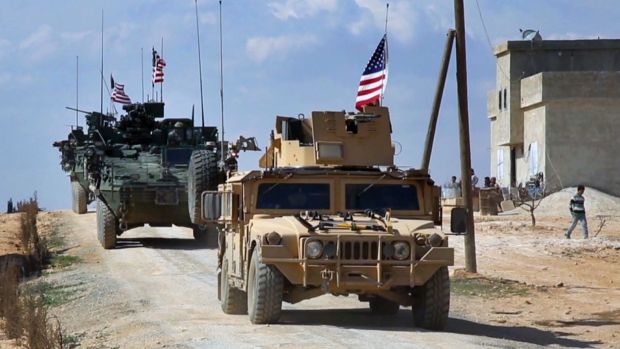 Amid multi-sided conflict in northern Syria, US put in 500 more troops

The US has put more troops into northern Syria to support the Kurdish-led Syrian Democratic Forces, both in a prospective offensive against the Islamic State-held city of Raqqa and to hold a line against a Turkish-rebel advance in Aleppo Province.

Officially the 400 additional troops, including Marines and Army Rangers, will provide artillery support for the assault on Raqqa, ISIS’s main position in Syria.

We have had what I would describe as a pretty relentless air campaign to destroy enemy capabilities and to kill enemy fighters in that area already. That is something that we are going to continue and intensify with this new capability.

However, some of the US troops — now totalling about 900 — are deploying near SDF-held Manbij, 85 miles northwest of the Raqqa. Those forces will help a line facing a Turkish-rebel offensive which has pushed back the Islamic State in Aleppo Province since last August, capturing the city of al-Bab in late February.

Convoys of U.S. troops, including Stryker armored vehicles and Humvees, heading through the northern Syrian countryside trailing big Stars and Stripes flags. Publicity for the move, including photographs and videos, appeared to be designed to deter further clashes between the SDF and Turkish-rebel units.

Turkey wants to push the Kurdish militia YPG, which leads the SDF, out of Manbij and east of the Euphrates River. It had pressed the US to encourage the withdrawal, but that political initiative appeared to be dormant with the incoming Trump Administration.

Instead, the US has effectively allied with Russia for the first time. The Russians have also put in forces near Manbij, although Washington officially maintains that it was involved with the move.

In a further twist, the SDF has handed over several villages west of Manbij to an advancing pro-Assad offensive, creating the first de facto arrangement involving the Kurdish Syrian Democratic Party (PYD) and the YPG, the Assad regime, Russia, and the US.

Turkey says the PYD and YPG are linked to the Turkish Kurdish insurgency PKK, which has fought Ankara’s forces for more than 30 years. The US officially says that Arab units and not the YPG comprise the SDF in Manbij and other positions west of the Euphrates.

The Turkish military claimed on Thursday that its operations with rebels have killed 71 YPG fighters over the past week.

Turkey launched an operation to drive Islamic State away from its border with Syria in August, and has said that it would strike the U.S.-backed YPG if necessary to prevent them seizing territory there.

Turkey has long demanded that the YPG move out of the Syrian town of Manbij to the eastern side of the Euphrates river. Ankara sees the militants as a terrorist group allied to the Kurdistan Workers Party (PKK), which has waged a three-decades-old insurgency in southeast Turkey.

The tension has affected plans for the Raqqa offensive. The first Turkish-Russian-US meeting of military commanders, held in southeast Turkey this week, ended with Ankara criticizing the continued US support of the PYD and YPG and repeating that no Kurdish forces should be involved in operations.

Officials said that the Trump Administration is divided over next steps. Some staff are pressing for a re-evaluation of the links with the YPG to assuage Erdoğan. Others want the U.S. to work with Kurdish forces to take Raqqa, and then hand control of the city over to a local council linked to the SDF and sympathetic to the Assad regime and Russia.

“There’s not anything near an agreement or a plan,” said a “senior U.S. military official”. “It’s up to the White House.”

A “senior Administration official” summarized, “Everything is red hot.”

Head of US Central Commmand: More Troops Should Be Deployed

The head of US Central Command, Genera; Joseph Votel, told a Senate committee hearing on Thursday that even more US troops should be deployed.

Votel told the Armed Services Committee that is looking for options to ease the tensions with Turkey, but he offered no details.

TOP PHOTO: US armored vehicles deploying near Manbij in northern Syria this week

Netanyahu visited Putin on Thursday, with Israeli media repeating the line that had been out before the trip to Moscow.

However, The Times of Israel says Putin chided Netanyahu over the Prime Minister’s repeated warnings:

“Today there is an attempt by Persia’s heir, Iran, to destroy the state of the Jews,” Netanyahu said. “They say this as clearly as possible and inscribe it on their ballistic missiles.”

Adopting a conciliatory tone, Putin said that the events described by Netanyahu [linked to this week’s Jewish celebration of Purim] had taken place “in the fifth century BC”.

“We now live in a different world. Let us talk about that now,” Putin said.

Just before Russia’s massive military intervention behind the Assad regime in September 2015, Netanyahu sought assurances that Lebanon’s Hezbollah and other Iranian-linked forces stayed away from the Israeli-occupied Golan Heights.

The Israel Defense Forces have also carried out a series of operations to contain Hezbollah, including the bombing of warehouses and convoys with weapons for the Lebanese groups, as well as responding to mortar and rocket fire near the border with the Golan Heights.

In a week of high-level maneuvers, especially the situation in northern Syria (see above), Putin is hosting Turkish President Recep Tayyip Erdoğan today.