TrumpWatch, Day 48: “Not All WikiLeaks Are Equal” — Administration 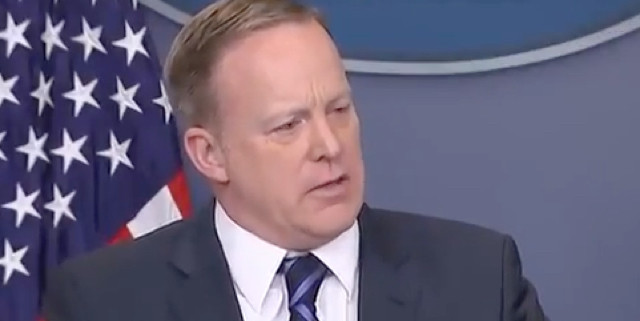 Developments on Day 48 of the Trump Administration:

The Trump Administration insists on a difference in approach to leaks of information, specifically WikiLeaks’ current release of documents about the CIA’s surveillance operations and the group’s 2016 publications trying to damage Trump’s Democratic opponent Hillary Clinton.

Press Secretary Sean Spicer expressed Trump’s “concern” about leaks and said Americans should be “outraged” by the release of classified information. However, he continued, “It’s interesting how there’s sort of a double standard with when the leaks occur, how much outrage there is” (from 6:59 in the clip):

On the campaign trail, Trump welcomed WikiLeaks’ release of e-mails concerning Clinton, declaring at one point, “I love WikiLeaks!” He encouraged the Russian hacking that may have provided those e-mails for publication, also applauding the hack of the Democratic National Committee.

There is a big difference between disclosing [Clinton campaign chairman] John Podesta’s G-mail accounts about a back-and-forth and his undermining of Hillary Clinton and his thoughts on her on a personal nature, and the leaking of classified information.

Representative Adam Schiff, the top Democrat on the House intelligence committee, hit back:

The reality is, yes, there’s a difference between the hacking and the leaking through WikiLeaks during the campaign — but both were wrong, both were serious injuries to our national security….Both should be condemned.

Schiff raised the Russian issue, saying leaks were part of Moscow’s campaign to “undermine US democracy”.

The Press Secretary also sustained Donald Trump’s claim — trying to move attention away from an inquiry into the contacts between the Trump campaign/Administration and Russian officials — that President Obama wiretapped Trump Tower in 2016.

Asked if the President is “the target of a counter-intelligence investigation”, Spicer replied:

I think that’s what we need to find out. There was considerable concern last cycle when a reporter was the target of one. But part of the reason we have asked the House and Senate to look into this is because of that.

In 2013, Fox News’s James Rosen was investigated by the Justice Department in 2013 with a warrant from a court. Rosen’s e-mails were scanned but he has said he was not wiretapped.

Spicer insisted, “The president has made clear he has no interests in Russia and yet a lot of these stories that come out with respect to that are frankly fake.”

A federal judge in Hawaii agrees to hear the first legal challenge to Donald Trump’s “Muslim Ban 2.0” on March 15, hours before it is scheduled for implementation.

Attorneys for the State of Hawaii filed a 40-page challenge, requesting a temporary restraining order.

Trump signed a revised executive order on Monday, banning consideration of visas of citizens from six Muslim-majority countries for 90 days and banning refugee entry for 120 days.

Breitbart said that House Speaker Paul Ryan’s plan, supported by the Trump Administration, is “Obamacare 2.0” and told its readers that the legislation “gives illegal aliens health care through identity fraud” and amounted to “GOP welfare entitlement”.

“We are Breitbart,” Matthew Boyle, the website’s Washington editor, wrote in a conversation about his related story: “This is war. There are no sacred cows in war.”

On Wednesday, Boyle furthered the challenge with an interview with Senator Rand Paul, a loud critic of the Ryan proposal: “Sen. Rand Paul on Paul Ryan’s Obamacare Lite: Speaker ‘Trying to Pull the Wool Over the Eyes of the President’”.

Bannon has previously challenged Boyle for a critical article about White House Chief of Staff Reince Preibus, according to “two sources with knowledge of the situation.”

Bannon was angry because he and Priebus, often said to be at odds with each other within the White House, are portraying themselves as friends and allies. Boyle had not told the chief strategist about the story in advance.

Bannon instructed Boyle not to publish additional articles critical of Priebus, prompting the Washington editor to tell others that Bannon had betrayed Breitbart and was guilty of “treason”, according to a source.

The chief medical officer for Medicare, doctors, and hospitals object to the proposals of House Republicans to replace ObamaCare.

Despite political messaging from others at HHS, I align with the experts from @aafp @AmerAcadPeds @AmerMedicalAssn in opposition to #AHCA

As organizations that take care of every individual who walks through our doors, both due to our mission and our obligations under federal law, we are committed to ensuring health care coverage is available and affordable for all,” they wrote. “As a result, we cannot support the American Health Care Act as currently written.

The American Medical Association told leaders of two House committees on Tuesday that it cannot support the Republican bill “because of the expected decline in health insurance coverage and the potential harm it would cause to vulnerable patient populations”. The current system, it said, “provides the greatest chance that those of the least means are able to purchase coverage”.

ACA replacement, as written, is not a bill the AMA can support — reductions in coverage are too critical a flaw. https://t.co/pbXPPuX7wz pic.twitter.com/DjPDypiVit

Specialist doctors, including the associations for lung and thoracic treatment, and nurses put out further statements of rejection.

An alternative health care bill, put out by a GOP Representative from Texas, calls itself the “World’s Greatest Healthcare Plan of 2017”.

Pete Sessions introduced his version on March 1. While it received some media attention, it is separate and distinct from the main GOP proposals, put forth by Speaker Paul Ryan.

Four health economists compare the likely costs of the main GOP proposal to replace the Affordable Care Act with the current price for ObamaCare:

We provide the figure for 2020 because that’s when the Republican tax credits would go into effect; we provide a figure for this year so that readers can get a sense of how the plan might affect their situation were it implemented today. Importantly, the gap between costs under the ACA and under the Republican bill would grow over time.

In general, the impact of the Republican bill would be particularly severe for older individuals, ages 55 to 64. Their costs would increase by $5,269 if the bill went into effect today and by $6,971 in 2020. Individuals with income below 250 percent of the federal poverty line would see their costs increase by $2,945 today and by $4,061 in 2020.