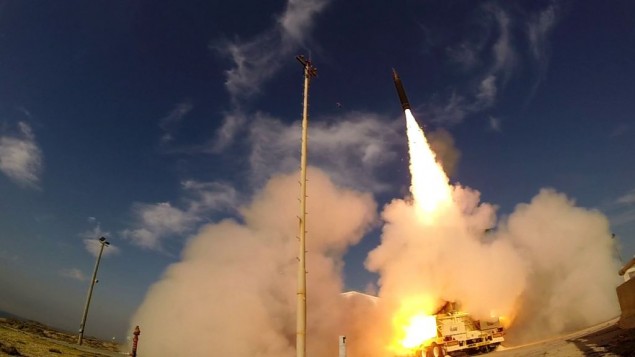 The Israeli military shot down one of three anti-aircraft missiles fired as Israel’s air force struck targets inside Syria on Friday.

The officials said the Arrow defense battery was used for the first time to carry out the interception.

It is unclear why the Arrow, primarily designed to shoot down intercontinental ballistic missiles, was used in what appeared to be an attack by an SA-5 surface-to-air missile.

The blast was heard about 2:45 a.m. in Jerusalem, dozens of miles from the Syrian border, as warning sirens went off in Israeli settlements in the Jordan Valley in the Palestinian West Bank.

There were no reports of casualties or damage.

Israel has regularly carried out airstrikes during Syria’s six-year conflict. The Israelis have attacked to prevent the movement of missiles and other weapons to Lebanon’s Hezbollah, allied with the Assad regime, and in response to mortar and rocket fire near the Israeli-occupied Golan Heights.

Last week Israeli Prime Minister Benjamin Netanyahu met in Moscow with Russian President Vladimir Putin to reiterate Israel’s message that Hezbollah and other Iranian-backed forces should be kept far from the Golan Heights in southwest Syria.

Israel’s Arrow 3 anti-aircraft missile, used for the first time on Friday, in a test launch in December 2015