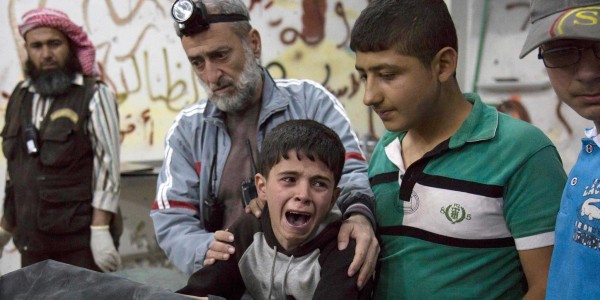 PHOTO: A boy weeps over the body of a relative in an opposition-held area of Aleppo city, April 2016

Almost 17,000 civilians — including 1,984 children and 1,237 women — were killed in Syria in 2016, according to a human rights organization documenting deaths and abuses in the conflict.

The Syrian Network for Human Rights said regime forces were responsible for more than half of the 16,913 deaths, killing 8.736 people. Among them were 1,984 children and 1,237 women.

The Islamic State killed 1,510 people, while rebels caused 1,048 deaths, most of them from rocket attacks. The US-led coalition killed 537, almost all by airstrikes, while Kurdish forces killed 146. “Other parties” left 951 dead.

Of the deaths, 476 were by torture, with regime forces responsible for 447.

Of those seized by regime forces, 251 were children and 448 were women.

The SNHR said 112 medical personnel and 86 media activists were killed. Almost all were slain by Russian-regime attacks, although the Islamic State killed 20 medical staff and 18 citizen journalists.