PHOTO: Rescuers dig through rubble of a jihadist-rebel camp struck by a US B-52 bomber and drones on Thursday

The Pentagon says a US airstrike on Thursday killed more than 100 members of the jihadist Jabhat Fatah al-Sham and a rebel faction in northwest Syria.

The attack targeted a training camp of JFS, formerly known as Jabhat al-Nusra, and the faction Nour ed-Din al-Zinki in Idlib Province.

JFS/Nusra broke with Al Qa’eda last July, saying that it wanted to unify Syrian groups fighting the Assad regime; however, the US continues to label it as “Al Qa’eda” and “terrorist”. Zinki works with JFS/Nusra on the battlefield, but is not formally labeled by Washington as a terrorist group which can be targeted.

“The removal of this training camp disrupts training operations and discourages hardline Islamist and Syrian opposition groups from joining or cooperating with al-Qaida on the battlefield,” Pentagon spokesman Jeff Davis said in a statement.

An official said the airstrike was carried out by a B-52 bomber and drones, dropping 14 munitions.

The US has escalated strikes on JFS/Nusra, which has been clashing with other rebel factions in Idlib, in recent weeks. Several commanders have been killed, and a complex was struck, leaving more than 25 dead.

Davis said more than 150 “Al Qa’eda militants” have been killed this month.

Schools Closed in Besieged Madaya Because of Pro-Assad Shelling

Schools in Madaya, besieged by Hezbollah and regimes forces since July 2015, have closed until further notice because of shelling and artillery fire from the town’s periphery.

The attacks have forced a total of 4,600 school-aged children to sit at home since Monday, school principal Abu Muhammad said.

The schools have been closed on four occasions since the beginning of the academic year. Abu Muhammad explained:

If the schools remain closed, we might be talking about students losing out on an entire year. It’s not just one obstacle these students face, not just the school closure. There’s the lack of basic materials and updated curricula. An estimated 70% of students don’t have books.

Three weeks ago, student absences spiked because of the cold as the school has no resources for heating, with additional absences caused by illness.

Madaya’s civilians have faced starvation amid the 18-month siege which has cut off food, medicine, and other supplies.

An agreement has linked the fate of Madaya and nearby Zabadani to two regime enclaves in northwest Syria, but assistance continues to intermittent.

The Wadi Barada Media Center has given Syria Direct a copy of Thursday’s agreement to end a four-week pro-Assad assault on the Wadi Barada area, northwest of Damascus:

1) A ceasefire and end to military operations in the area will take effect starting at 3pm today [Thursday].

2) Repair workers will enter the Ein al-Fijeh water pumping station. At the same time, [opposition] fighters and factions from al-Jaroud [the villages surrounding Wadi Barada] will enter the area.

3) There will be amnesty for fighters wishing to remain, and they will leave [Wadi Barada] within six months.

4) Those who refuse amnesty will have their names recorded and will be moved to Idlib [Province in northwest Syria], under the protection of the United Nations and supervised by the International Red Cross.

5) The army and its supporting militias will leave Baseema [the only one of Wadi Barada’s 10 villages captured in the offensive] in a determined period of time. The army will remain in points that it reached in Ein al-Fijeh [the area near the springs providing 60% of Damascus’s water].

6) There will be reconstruction on the villages of Baseema and Ein al-Fijeh in a determined period of time.

However, it is uncertain if the terms will hold. Local activists reported on Friday that Hezbollah and regime attacks, include barrel bombs, were ongoing. The activists report more assaults today.

A pro-regime account acknowledged on Saturday afternoon that the pro-Assad forces are defying the truce:

A pro-regime site reports another Islamic State assault in its offensive against the Assad regime in and near the city of Deir ez-Zor in eastern Syria.

Al Masdar said ISIS struck the southern flank of the Deir ez-Zor military airport on Friday night. It claimed the Russian and regime air forces responded with more than 40 airstrikes.

The ISIS offensive has already taken the northern perimeter of the airport and has cut it off from Syrian army and militia in Deir ez-Zor city.

The Islamic State moved earlier this month to defeat regime forces in Deir ez-Zor, Syria’s 7th-largest city, which has been divided since 2015.

A World Food Program official has confirmed that “stand off” airdrops of provisions, mainly medical supplies, are being delivered from distance into Deir ez-Zor city.

Jakob Kern told Syria Solidarity UK of the use of FireFly JPADS, which have a range of more than 25 km (15 miles):

@SyriaUK yes but only a around 25 mostly for for medical supplies.

Syria Solidarity UK, which has pressed for aid into all besieged areas, notes that the JPADS could be used in opposition territory near Damascus such as Wadi Barada and Madaya, cut off and under assault by pro-Assad forces.

So far the WFP has never used the JPADS to help opposition districts.

President Assad has ruled out any transitional government as part of the political resolution of the Syrian crisis.

A transitional governing authority has been at the center of international proposals since 2012, but Assad told a Japanese TV outlet that this could not be considered at talks next week in Kazakhstan.

In our Constitution there’s nothing called transitional government. You can have regular government that represents different parties and different political entities in Syria…. If anybody wants to join this government, what we call it national unity government, this is viable for every party outside or inside Syria, and after that government, you can talk about, let’s say, legislative elections or parliamentarian elections.

The opposition and rebels maintain that Assad must step aside in a transition. However, Turkey — a broker alongside Russia of the forthcoming talks and a long-time backer of the opposition until recently — is stepping away from the requirement of Assad’s departure. Deputy Prime Minister Mehmet Simsek said on Friday at a meeting at the World Economic Conference in Davos, Switzerland:

Rebels said this week that they are attending the talks to test Russian and regime adherence to a ceasefire, release of detainees, and an end to sieges; however, they added that they do not expect any movement from Assad.

The President asserted — even though his forces and allies have defied a December 29 ceasefire, especially with offensives near Damascus — that the talks would consider the issues:

I think it’s going to focus more at the very beginning – it’s going to be the priority, as we see it – is about the ceasefire in different places in Syria in order to protect lives, to allow the humanitarian aid to reach different areas in Syria.

Pointing to its long-term military presence, Russia has confirmed a permanent agreement to expand its naval base in Tartous and its Hmeimim airbase in western Syria.

Russia’s official legal site heralded the deal with the Assad regime, “The current agreement will stay effective for 49 years and be automatically prolonged for 25-year periods, if neither party makes a twelve months’ notice in writing through diplomatic channels of its intention to terminate the agreement’s operation.”

Moscow has had a naval facility in Tartous since 1971, but it was limited until Russia’s military intervention in September 2015 to prop up the Assad regime, as the Russians launched thousands of airstrikes from Hmeimim.

The Russians declared that their personnel and the faciities “shall enjoy full immunity from the civil and administrative jurisdiction of Syria”, including search, seizure, and arrest.

Up to 11 Russian vessels, including nuclear ships, will be able to stop simultaneously stop in Tartous.

The Islamic State has destroyed one of the most famous Roman monuments in the city of Palmyra, the Assad regime’s head of antiquities said on Friday.

Maamoun Abdulkarim said the Tetrapylon and the facade of the Roman Theatre had been demolished.

The Islamic State regained Palmyra from the regime in December as pro-Assad forces concentrated on the re-occupation of Aleppo city. ISIS also held Palmyra from May 2015 to March 2016 — the group destroyed shrines, and its operations and the regime’s effort to regain the city damaged much of the Roman architecture and buildings.

UNESCO Director General Irina Bokova said in a statement that the latest destruction constituted “a new war crime and an immense loss for the Syrian people and for humanity”.

The Tetrapylon, on a slight bend along Palmyra’s grand colonnade, is a square stone platform with matching structures of four columns positioned at each of its corners.

Satellite imagery sent by Abdulkarim showed it largely destroyed, with only four of 16 columns still standing and the stone platform apparently covered in rubble. He said the destruction took place sometime between December 26 and January 10.

Several towering stone structures were damaged on the stage of the Roman Theater, where a Russian orchestra performed in May to celebrate the recapture of Palmyra by pro-Assad forces. 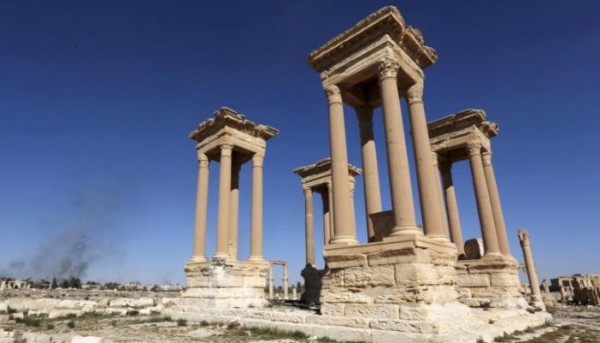