UPDATE 1745 GMT: Thirteen Syrian civil society organizations have appealed for a single version of the ceasefire agreement, to be made public.

Opposition activists and rebels claim two different versions of the agreement have been circulated, one to rebels and one to the Assad regime. Several conditions are different, including whether the jihadists of Jabhat Fatah al-Sham (formerly Jabhat al-Nusra) are excluded as well as the Islamic State from the ceasefire: rebels say JFS was not excluded in the version they signed but was excluded in the document signed by the reigme.

The signatories also called for “a credible political process that will lead to the realization of the Syrian people’s aspirations in freedom, justice, and dignity” with “a publicly-published monitoring, verification and accountability process”.

The groups, who include the Violations Documentation Center and the Syrian Network for Human Rights, claimed breaches of the ceasefire by pro-Assad forces, such as the continued assault on the Wadi Barada pocket and Atareb in western Aleppo Province. They said the violations prove “the lack of seriousness of the regime”, and called for “the continuous and unhindered delivery of humanitarian and medical aid to all Syrian territories and primarily to the besieged areas” as “the real test on the willingness of the regime and its allies to abide by UN Security Council resolutions”.

An attack on al-Fija almost hit the pumping station that was damaged last week, severely restricting water to more than 4 million people:

The activists also say that pro-Assad forces are continuing their attempts to gain territory east of Damascus, attacking near Midani.

Rebels and pro-opposition activists reported ongoing shelling and ground assaults on Sunday, the fourth day of the truce.

A spokesman for the Jaish al-Nasr rebel faction, Mohammad Rasheed, claimed a “fierce attack and attempt by Assad and Shi’ite militias to raid Wadi Barada” from nearby hills.

However, activists said that there was a cessation of airstrikes on Sunday.

Rebel factions warned on Saturday that they would stop adhering to the ceasefire if the pro-Assad attacks did not stop. A rebel official said yesterday that low-level clashes on the ground would not necessarily collapse the ceasefire, but that airstrikes were a “clear violation”.

The Syrian military and militias, reportedly accompanied by Hezbollah, launched their assault almost three weeks ago on the Wadi Barada pocket of 13 villages and about 100,000 people. The area is significant because of the al-Fija springs, which provide more than 60% of Damascus’s water.

Regime shelling and airstrikes have damaged the pumping station for the springs, severely limiting supplies to the capital. The UN has said that more than 4 million people have access to water for only two hours each day, and prices for bottled water have more than doubled.

Syrian State media, invoking a “source at the Syrian Arab Red Crescent”, is claiming that hundreds of civilians have fled their homes amid the attacks.

Attacks East of Damascus and in Aleppo Province

Elsewhere, the pro-Assad website Al-Masdar hailed the Syrian Army’s breaking of the ceasefire east of Damascus.

The site said the regime military attacked northeast of the village of Hazrama and against a former base now held by rebels.

Al-Masdar, which recycles claims made by regime military personnel, said the assault was on the rebel faction Jaish al-Islam, which is covered by the ceasefire.

The White Helmets civil defense organization and pro-opposition activists reported bombing of Meznaz village in southern Aleppo Province in northwest Syria. Pictures were posted of a damaged school, and claims circulated that 10 students were wounded. 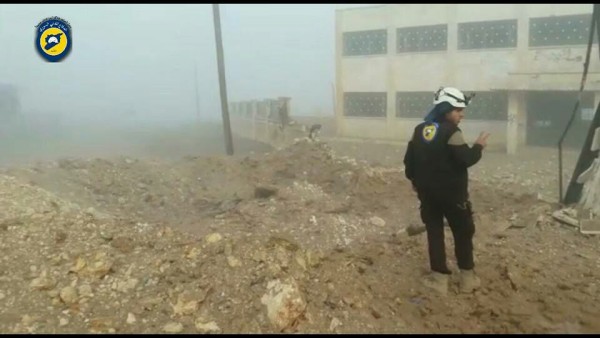 According to pro-Assad activist Hassan Ridha, a representative of Russia’s Hmeimem military operations centre said the siege and assault on Wadi Barada does not violate the ceasefire because rebels in the area are affiliated with the jihadists of Jabhat Fatah al-Sham, formerly known as Jabhat al-Nusra.

The claim gives cover to the attacks because of a version of the ceasefire, presented by Russia and Turkey to the UN Security Council last week, which excludes JFS/Nusra as well as the Islamic State from the truce.

Rebels say the version of the ceasefire agreement which they signed did not exclude JFS/Nusra. Moreover, the jihadist faction left the Wadi Barada area in late 2015.

Fars News, the propaganda arm of Iran’s Revolutionary Guards, also tried to maintain the pretense on Sunday with the proclamation of “attacks on Nusra centers in northwestern Damascus”.

Russian State media makes no reference to Wadi Barada or the fighting east of Damascus, instead putting out the claim of Russia’s “Center for Reconciliation” in Syria that rebels carried out 21 shellings on Sunday.

Local sources say two commanders of the jihadist faction Jabhat Fatah al-Sham have been killed in northern Syria by a US airstrike.

The commanders, identified as Khattab Al-Qahtani and Abu Al-Mutassim Al-Dayri, were attacked near Sarmada in Idlib Province.