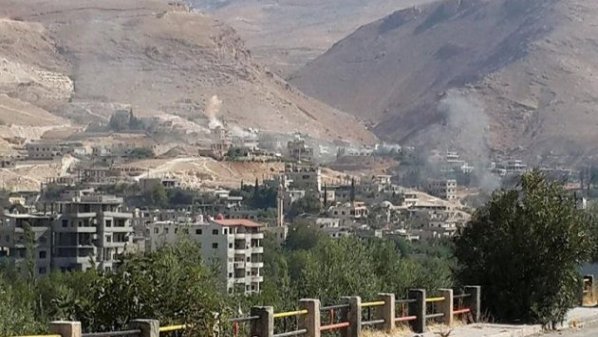 PHOTO: The opposition pocket of Wadi Barada, northwest of Damascus, under ongoing attacks by pro-Assad forces despite a national ceasefire

UPDATE 1245 GMT: According to a pro-Assad activist, a representative of Russia’s Hmeimem military operations centre has said the siege and assault on the Wadi Barada pocket, northwest of Damascus, does not violate the ceasefire because rebels in the area are affiliated with the jihadists of Jabhat Fatah al-Sham.

If true, the report fulfils the prediction that Russia’s tactics — in line with a possible deception over the ceasefire agreement — are to provide space for the ongoing attacks on Wadi Barada through the pretext that JFS is a target because it is excluded from the truce.

Fars News, the propaganda arm of Iran’s Revolutionary Guards, tries to maintain the pretense with the proclamation of “attacks on Nusra centers in northwestern Damascus”.

The site also puts out the fiction that about the Syrian Army providing for “the safe evacuation of civilians from [the] bazaar” in Wadi Barada.

UPDATE 0945 GMT: Claims are circulating this morning of new violations by pro-Assad forces of the ceasefire, this time in western Aleppo Province.

Photographs and a video claim bombing of a school in Meznaz, injuring students, and of Atareb, a frequent target of pro-Assad attacks.

Claimed footage of the aftermath of the bombing:

ORIGINAL ENTRY: The Assad regime, exploiting what appears to be a deliberate loophole in the national “ceasefire”, continued air and ground attacks near Syria’s capital Damascus on Saturday.

Pro-Assad forces maintained their attempt, launched more than two weeks ago, to overrun the Wadi Barada pocket northwest of the capital. Shelling and mortar fire were reported as the forces tried to advance on the southern edge of the area, with 13 villages and about 100,000 people.

The offensive has already damaged the pumping station for the al-Fija springs, which provide more than 60% of Damascus’s water. Supplies have been limited to about two hours per day for more than four million people.

Rebel groups warned that they might revoke their accession to the ceasefire, particularly if the offensive on Wadi Barada did not cease. However, as of Sunday morning, the rebels were still refraining from their own attacks.

A Deception by Russia and Turkey?

The opposition and rebels claimed that the ongoing pro-Assad attacks were enabled by a deliberate deception by the Assad regime key’s ally Russia and Turkey, which has been a leading backer of the rebellion.

Rebel factions noted that they had signed a version of the truce agreement which excluded only the Islamic State. But they said that the Assad regime had accepted a version with several key changes, notably the exclusion of both ISIS and the jihadist faction of Jabhat Fatah al-Sham.

The addition of JFS, formerly Jabhat al-Nusra, is essential because it allows the regime — and its allies, including Russia — to continue attacks on opposition areas with the pretext that they are targeting JFS/Nusra, even when the faction is not present.

The opposition and rebels also said other non-negotiable conditions were omitted from the version signed by the Assad regime.

A Russian-Turkish summary of the ceasefire, excluding both ISIS and JFS/Nusra, was presented to the UN Security Council for approval on Saturday. The Council welcomed and supported the truce; however, it stopped short of endorsing the agreement.

Western members of the Council sought changes to clarify the UN’s role and the meaning of the agreement brokered by Moscow and Ankara. Several delegates “said the agreement contained gray areas and that its implementation was fragile”.