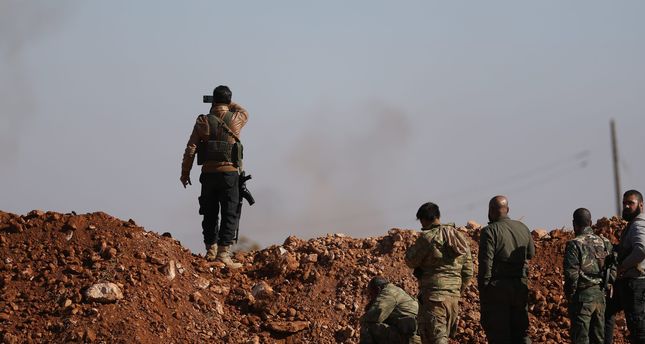 PHOTOS: Turkish soldiers on the al-Bab front in northern Syria

Analysis: Aleppo Was Not an “Evacuation” — It Was a Crime of Forced Displacement

Scores of civilians have reportedly been killed by Turkish airstrikes in Syria’s Aleppo Province, as a Turkish-rebel offensive tries to take the last major ISIS position in the area.

The Local Coordination Committees said it has documented more deaths in the town of al-Bab on Friday, following the initial reports of casualties on Thursday. Over the two days, the LCC has recorded the killing of 126 people in Aleppo Province, “most of them” from the Turkish bombing.

A local source says the LCC has now identified 80 slain civilians and is still counting. The toll could be as high as 120, the source reports.

The Turkish military, which claimed strikes on 51 ISIS targets on Friday, has not reported any civilian casualties.

The Turkish-rebel drive on al-Bab, northeast of Aleppo city, began in mid-November and was renewed on Wednesday. After initial gains, the grounda attacks were repelled by the Islamic State. The Turkish military acknowledged the loss of 16 troops, while maintaining that it had killed more than 160 ISIS fighters.

The Islamic State said it destroyed a number of armored vehicles and disseminated a video showing its burning to death of two Turkish soldiers.

Turkish Defense Minister Fikri Işık said Friday that the area around the National Hospital, which he claimed is an ISIS command-and-control center, and an ammunition depot on Sheikh Aqil Hill had been cleared.

The offensive briefly took the hospital and hill before it was pushed back on Wednesday.

Işık also acknowledged that three Turkish soldiers have been captured by the Islamic State.

Turkey launched its military intervention in northern Syria on August 24, accompanying rebels with airstrikes, armored vehicles, and special forces. The offensive has taken the corridor along the Turkish-Syrian border and pushed ISIS deep into Aleppo Province.

Footage of the aftermath of the airstrikes, including the digging of a child from the rubble, has been removed by YouTube.

As civilians and rebels are moved from eastern Aleppo city to western Aleppo Province, claimed video of Russian airstrikes with cluster bombs on the area near Khan al-Asal:

Aftermath of strikes on Saturday on Atareb — six civilians, including two children and a woman, were killed:

Turkey: Summit with Russia and Iran Next Month

Signalling their developing cooperation with Russia and Iran, Turkish officials said on Saturday that the three countries will meet in Kazakhstan next month as a “confidence-building step complementary to the Geneva process” for a resolution of the Syrian crisis.

The Turkish Foreign Ministry spoke after Russian President Vladimir Putin’s announcement on Friday of agreement for “peace talks”. He added that President Assad had consented.

Putin said other regional players, including Saudi Arabia, can contribute and that the US — sidelined by the growing Russian-Turkish-Iranian cooperation — is welcome to join.

After years on opposite sides of the Syrian conflict, Russia and Turkey have reconciled with a significant effect on the course of the crisis. In an apparent deal between Turkish President Recep Tayyip Erdoğan and Putin, Ankara consented to the pro-Assad reoccupation of all of Aleppo city, while Moscow accepted a Turkish military intervention alongside rebels throughout much of Aleppo Province.

The two countries were instrumental in arranging the arrangement to remove civilians and rebels from Aleppo city, with Erdoğan and Putin twice renewing the deal to overcome objections by Iran and the Assad regime.

However, Turkey is still maintaining some distance from the Russians and Iranians. At a tripartite meeting on Tuesday marking the cooperation, Foreign Minister Mevlüt Çavuşoğlu — while agreeing ot the fight against the jihadists of Jabhat Fatah al-Sham and the Islmamic State — emphasized that “foreign groups such as Hezbollah and other groups [Iraqi, Afghan, and Palestinian militias]” were alongside Russia and Iran in military operations for the Assad regime:

Support for all these groups should be ended. It’s not appropriate to address a single side.

The regime must return to the negotiating table for direct talks with the opposition for a genuine political transition. We should send out a strong message that the foreign militia should leave Syria right away.