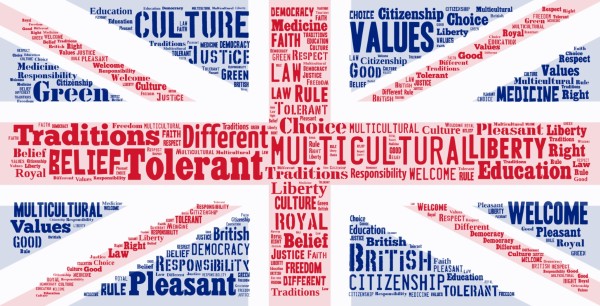 PHOTO: “Is it right to require public subscription to ‘British values’?”

Matthew Cole of the University of Birmingham writes for The Conversation:

According to three-time British Prime Minister Stanley Baldwin: “An Englishman is all right, as long as he is content to be what God made him – an Englishman.”

Three generations later, another Worcestershire Tory Cabinet minister, Communities Secretary Sajid Javid, is more doubtful about our sense of identity. Writing in the Sunday Times, he said: “Some minority ethnic groups are particularly prone to living in ethnic bubbles.” He added that whereas he had been raised to “embrace British values and play an active role in British life”, now “too many politicians have ducked the issue”.

This cry, driven by fear of security threats since 9/11 and the rise of the far right, is nothing new. And nor are the problems it raises. Labour’s David Blunkett introduced Citizenship education in 1999 with the aim of establishing acknowledged common social principles. Then, after the riots of 2001, as Home Secretary he demanded an oath of allegiance for immigrants and urged Asians to speak English at home.

The Conservative-Lib Dem coalition Government of 2010 required schools and colleges to teach the benefits of “British Values”, and now Javid has revived the idea of an oath to these values, this time for both immigrants and holders of public office. It follows the 2016 report on integration published by Dame Louise Casey.

What is needed, Casey insists, is a reaffirmation of our national characteristics: “Democracy, the rule of law, individual liberty and […] tolerance of those with different faiths and beliefs.”

But are these definitively “British” values? And is it right to require public subscription to them? The answer to both questions is surely “No”.

First, the claim that these four characteristics are distinctively and universally British withstands no scrutiny. Democracy belonged to the Greeks 2,000 years before its name was muttered by English radicals in the Civil War. The most distinctively British institutions — the House of Lords and the monarchy –– are quite unashamedly anti-democratic.

The Roman Empire has a good claim to the idea of applying the law uniformly. In any event, a country which cannot agree that the courts have the right to resolve which of our institutions makes treaties has relatively little moral altitude from which to boast about constitutionalism.

The last two ideas, individual liberty and tolerance, are also as foreign as they are British. They also demonstrate the very obvious difficulty of treating these as simplistic, free-standing principles which never collide.

The French defended the liberty of Charlie Hebdo by publishing and purchasing the offending cartoon which led to the slaughter of the magazine’s staff, and by rallying in the streets. The British endorsed the same principle but did not print the picture or protest anywhere near as actively, for fear of being intolerant of religious sensibilities.

The ethical calculus underlying our response to these challenges is a highly personal one. And even if there is a British tendency towards a solution, it cannot be one which satisfies all four criteria in a continuous and unmitigated fashion. Something has to take priority in each situation. That’s why the then Home Secretary Theresa May believed the Islamic preacher Anjem Choudary should not have been allowed freedom of speech on the BBC so as to protect the rule of law.

There are other values shared by most Britons, such as egalitarianism, solidarity, rights to health and education, and a sense of “fair shares”. These do not figure in the government’s list, though they were popular themes of Danny Boyle’s opening ceremony for the London Olympics in 2012.

The very idea of forcing public servants to swear allegiance to abstract, ill-defined and partly contradictory political ideals is perhaps the most un-British part of all this. In wartime, we have issued ID cards, but in peace Parliament refuses. We have conscripted men to fight, but always allowed objectors to withdraw. And our greatest thinkers have recognised in the most beautiful phrases of our language, the futility of trying to change hearts by silencing voices.

The philosopher John Locke warned of attempts to compel the British into affirming beliefs, declaring: “The care of souls cannot belong to the civil magistrate, because his power consists only in outward force.” John Stuart Mill said of those who participate in religious chanting: “They have an habitual respect for the sound of them, but no feeling which spreads from the words to the things signified.”

England’s greatest poet, John Milton, warned his fellow Parliamentarians in the throes of civil war that no attempt should be made to compel obedience out of their opponents: “Ye cannot make them chaste that came not thither so.”

Sajid Javid must know that swearing an oath will not make anybody any more British or more convinced of the government’s definition of Britishness. But does he even think it will help to calm political waters among a British public evidently divided and diverse in its sense of identity? Perhaps he should make a private oath to reflect a little more deeply on this idea over the holiday.