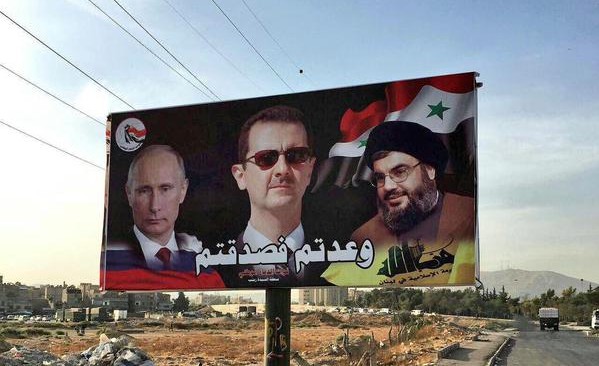 The Syrian civil war, and the intense new ground battle in the divided city of Aleppo, is often seen as a contest between a chaotic array of rebel groups and the Russian-backed government of President Bashar al-Assad. But the reality is that Mr. Assad’s side is increasingly just as fragmented as its opponents, a panoply of forces aligned partly along sectarian lines but with often-competing approaches and interests.

There are Iraqi Shiite militiamen cheering for clerics who liken the enemy to foes from seventh-century battles. There are Iranian Revolutionary Guards fighting on behalf of a Shiite theocracy. There are Afghan refugees hoping to gain citizenship in Iran, and Hezbollah militants whose leaders have long vowed to fight “wherever needed.”

The Syrians themselves are in a few elite units from an army steeped in a nominally socialist, Arab nationalist ideology, exhausted after five years of war, as well as pro-government militias that pay better salaries. And, yes, overhead there are the Russian pilots who have relentlessly bombed the rebel-held eastern side of Aleppo — trained to see the battle as supporting a secular government against Islamist extremist terrorists.

“The government’s fighting force today consists of a dizzying array of hyper-local militias aligned with various factions, domestic and foreign sponsors, and local warlords,” said one analyst, Tobias Schneider, in recently summing up the situation.

Foreigners Leading the Fight for Aleppo

The battle for eastern Aleppo, where the United Nations says some 275,000 people are besieged, has raised tensions between the United States and Russia to their highest levels in years, but the Cold War rivals do not wield clear control over their nominal proxies. The competing interests on both sides and lack of clear leadership on either one is part of why the fighting has proved so hard to stop: Mr. Assad is desperate to retain power, Moscow is seeking to increase its clout at the global geopolitical table, and Iran is exercising its regional muscle.

While Washington and Moscow say preservation of Syrian state institutions is a priority, a look at the fight for Aleppo, Syria’s largest city, shows that those structures are already atrophying.

At least one elite Syrian Army unit has been filmed seizing positions in Aleppo, but the bulk of the pro-government force is made up militiamen trained and financed by Iran, the Shiite theocracy that is the Syrian government’s closest ally, according to experts, diplomats, regional officials and fighters battling for and against the government.

“Aleppo is Shiite, and she wants her people,” goes a song overlaid onto a video posted online of an Iraqi cleric visiting Iraqi Shiite militia fighters on the front lines south of Aleppo. The message ignores the fact that the mainstream Shiite sect that accounts for the bulk of the Iraqi militias makes up less than 1% of Syria’s population.

The government’s Aleppo offensive has moved aggressively in the past week, worsening an epic humanitarian crisis. Syrian or Russian airstrikes have hit seven hospitals and killed hundreds of civilians, in what Moscow and Damascus describe as preparation for a final battle for the city.

The Syrian military has dropped leaflets urging rebels to surrender and civilians to leave, but the United Nations says that pro-government forces have not allowed access to the escape routes, and that residents are afraid of arrest if they head to the government side.

Pro-government ground forces have taken bites out of rebel territory from several directions, but have faced tough resistance in street fighting from insurgents who in many cases are defending their own neighborhoods.

To the north, the Quds Brigade, made up mostly of Palestinians living in Aleppo, seized the Handarat Palestinian refugee camp, lost it to rebels, and seized it again. To the south, Iraqi militias and other fighters have battled rebels for crucial territory close to a water pumping center. Syrian Army forces, meanwhile, seized a neighborhood in central Aleppo near the ancient citadel.

As rebel groups called for a general mobilization, residents on their side have stockpiled equipment for digging wells, fuel for generators and seeds to grow food, in preparation for a lengthy siege.

There is no precedent in the Syrian war for ground forces’ quickly rolling into an area that rebels have held for years. The disjointed forces, many with no local connections, are not strong enough to take fortified urban rebel positions in a frontal assault.

Rather, airstrikes, artillery and starvation sieges have typically been used to force rebels to surrender in exchange for safe passage — a process that has taken months or years in places far smaller and less strategically vital than Aleppo. But it could go quicker if pro-government forces managed to take control of the water distribution plant and shut off water to the rebel side, or if thousands of Russian soldiers and veterans now working for private security contractors joined the ground battle.

The Russian opposition-leaning newspaper RBK, citing a security service source, said that private Russian military companies had 1,000 to 2,500 employees in Aleppo and in one other Syrian city, Latakia, under the de facto command of Russian military intelligence officers. Russian special forces are also on the ground in Syria.

The messy mosaic of ground fighters on both sides has challenged Washington’s tangled allegiances. The United States is effectively allied with Iraqi Shiite militias to thwart the Islamic State in Iraq, but in Syria, some of those same militias are fighting on the side of the Assad government, which the United States opposes, and against a mix of rebel groups, some of them backed by the Obama administration.

The front lines around Aleppo, as seen on video and described by witnesses, in some ways resemble those around Tikrit and Falluja in Iraq: In both countries, Shiite militia flags fly alongside, or sometimes instead of, those of a shaky national army and government.

In Iraq, militias have often acted as the tip of the spear, the first ground forces to enter after Iraqi government — and sometimes American — airstrikes. Similar scenes unfolded in northern Aleppo Province in February: After heavy Russian and Syrian airstrikes drove most people from villages, fighters from the Iraqi militia Harakat al-Nujabaa — the Noble Ones — Hezbollah and others fought rebel holdouts. Afterward, Syrian troops planted flags.

The pro-government forces now mobilized around Aleppo include several thousand fighters from Iranian-backed Iraqi Shiite militias known as the Popular Mobilization committees, which formed to fight the Islamic State in Iraq after it swept into large parts of that country in 2014.

South of Aleppo, Iraqi clerics have given rousing speeches to militiamen in fatigues urging them to fight in the name of faith and Islamic law. The Nujabaa fighters and their supporters have circulated an Arabic hashtag on social media, #AleppoOurNextVictoryInSyria.

Also fighting are Iranian troops and recruits from Iran’s sizable Afghan refugee population. The Iranian government has been increasingly open about the fact that these are not only advisers, as they were long portrayed.

At least 400 Iranians and Afghans from Iran have died “defending the shrines” in Iraq and Syria, as the government describes it. In June, at least a dozen members of Iran’s Islamic Revolutionary Guards Corps — some of them high-ranking — died in battles near Aleppo, and around that time some regular Iranian Army troops headed for Syria.

Around Aleppo, sectarian battle cries can be heard on both sides. Some Sunni insurgents use slurs against the Shiites who lead their archenemy — Iran — and against the Alawites, the sect Mr. Assad belongs to. And some foreign Shiite militiamen call their enemies by the names of foes from the seventh-century battle of Karbala that split Sunnis from Shiites.

There is more cultural affinity between Russia and senior Syrian Army officers — steeped in secular Baathist ideology and often trained in the Soviet Union — than between Syria’s formal military and Iran and Hezbollah. But militarily, they are all interdependent.

Before the war began in 2011, Syria had one of the largest and most professional armies in the region. But it has been eroded by tens of thousands of casualties, by untold numbers of men fleeing the country to avoid conscription, and by the practice of keeping many soldiers from the nation’s Sunni majority away from the front lines amid questions about loyalty.

Some Syrian officers and government officials grumble about Iran and Hezbollah impinging on their sovereignty, complaining that their fighters earn more than the Syrians and blow past road checkpoints with the flash of a badge. Damascus residents complain about the foreign fighters with semiautomatic rifles making stands in neighborhoods once visited by tourists from all over the world, like the shrine of Sayeda Zeinab, and the Christian quarters of the Old City.

In turn, both Russians and the foreign Shiite fighters have complained about a lack of discipline among Syrian conscripts. But while many Syrian soldiers are weary after years of war, the foreign militia ranks seem to have buoyant morale.

The leader of the Iraqi Harakat al-Nujabaa, for example, can be seen in a video the group posted on Facebook telling his men to keep up the battle against extremists backed by the United States, the “Zionist entity” and “arrogant, colonial forces,” then offering “the secret of our victory.”

On the video’s soundtrack, a singer then declared that when they see the militia’s fighters, “The people of Aleppo are happy.”