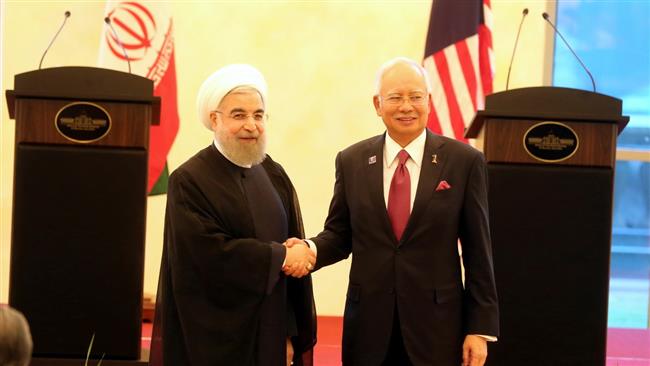 Rouhani began his trip in Vietnam on Thursday and moved to Malaysia on Friday. In a press conference with Prime Minister Najib Razak, he declared that the two countries will initially restore trade to the level before US and European sanctions took full effect in 2012.

Then the trade will be “promptly doubled”, Rouhani assured.

He added, “We also plan to turn 2016 into the year of development in improvement and expansion of mutual ties in economic, political, scientific and cultural fields.”

Iran has been hindered in its pursuit of trade and investment, even after January’s implementation of the July 2015 nuclear agreement, by continuing restrictions on finance and banking.

The US has ruled out Iranian access to the American financial market, and European banks and companies have been reluctant to restore because of continuing sanctions by Washington.

After years of stagnation and decline in the Iranian economy, Rouhani is pursuing a growth rate of 4.5% in 2016-2017.

The Government has been successful in reducing inflation from a rate of more than 40% in 2013 to 8.5% now. Oil production and sales have also recovered by 40% since January.

However, the non-oil sectors are still showing a loss, and — with oil revenues limited by low global prices, Rouhani faces a large budget deficit.

The efforts at international trade and investment are still struggling. Earlier this week, a high-profile mission led by German Economy Minister Sigmar Gabriel ended with a snub by Foreign Minister Mohammad Javad Zarif and Speaker of Parliament Ali Larijani, both of whom cancelled meetings.

Gabriel’s mission, which included 120 German business leaders, was undermined by political objections from Iran’s hardliners over the Minister’s statement that full relations could not be restored until Iran recognized the State of Israel.

In a meeting with Malaysian intellectuals and media, Rouhani bolstered Iran’s increasingly tough declarations of its intervention in Syria.

If it were not for Iran’s assistance and role, you would not be seeing [just] a group named Daesh [the Islamic State], you would be seeing a large Daesh state in Syria and Iraq, and the region would be facing a big endless war.

In recent weeks, the regime’s top officials — including the chief aide to the Supreme Leader — have shifted the line to declare that Iranian forces would have a significant role in the attempt to recapture all of Syria’s largest city Aleppo.

See Iran Daily, Oct 7: “We Will Win in Syria’s Aleppo”

Rouhani stopped short of that mark, holding to Iran’s long-established statements that it is providing “advisory” assistance to the Assa regime.