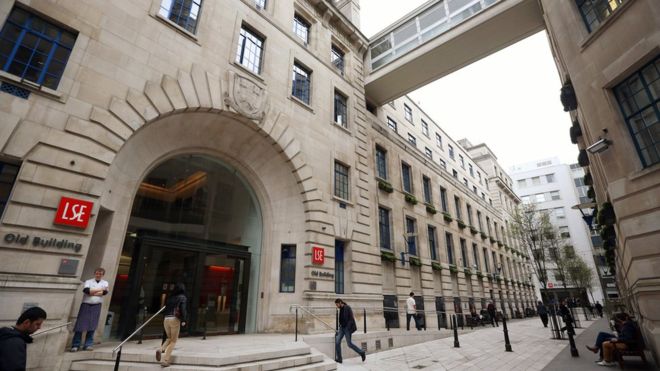 PHOTO: London School of Economics — “We are standing firm to our principles of valuing our truly international community of scholars”

Jon Henley writes for The Guardian:

Leading foreign academics from the London School of Economics, acting as expert advisers to the UK Government, were told they would not be asked to contribute to government work and analysis on Brexit because they are not British nationals.

The news was met with outrage by many academics, while legal experts questioned whether it could be legal under anti-discrimination laws and senior politicians criticized it as bewildering.

“It is utterly baffling that the government is turning down expert, independent advice on Brexit simply because someone is from another country,” said Nick Clegg, the Liberal Democrats’ EU spokesman.

“This is yet more evidence of the Conservatives’ alarming embrace of petty chauvinism over rational policymaking.”

Sara Hagemann, an assistant professor at the London School of Economics who specialises in EU policymaking processes, EU treaty matters, the role of national parliaments and the consequences of EU enlargements, said she had been told her services would not be required.

Asked to clarify whether she was responding to speeches at the Conservative party conference pledging tough new immigration controls, Hagemann, who is Danish, said she had been informed specifically that she would not be contributing to any further government Brexit work.

It is understood up to nine LSE academics specialising in EU affairs have been briefing the Foreign Office on Brexit issues, but the school was informed by a senior FCO official that submissions from non-UK citizens would no longer be accepted. The staff group concerned were then made aware of the instruction.

One of the group is understood to be a dual national, with citizenship of both the UK and another EU member state.

The Foreign Office was said to be concerned about the risk of sensitive material being exposed as article 50 negotiations over Britain’s exit from the EU – and subsequent talks on its future trade and other relations with the bloc – start to get under way.

The LSE said in statement that the government regularly called on its academics for advice, adding: “We believe our academics, including non-UK nationals, have hugely valuable expertise which will be vital in this time of uncertainty around the UK’s relationship with Europe and the rest of the world. Any changes to security measures are a matter for the UK government.”

The Foreign Office denied non-British nationals had been barred from the work, saying it had been misunderstood. “The FCO regularly works with academic institutions to assist in its policy research and nothing has changed as a result of the referendum,” a spokesman said.

“It has always been the case that anyone working in the FCO may require security clearance depending on the nature and duration of their work. Britain is an outward-looking nation and we will continue to take advice from the best and brightest minds, regardless of nationality.”

LSE interim director Professor Julia Black said in an internal school update memo on the matter that the world-renowned university stood by its academic principles of independence.

“You may have seen reports in the media that the Foreign Office have advised us that they will be issuing tenders to contract for advisory work, but that only UK nationals will be eligible to apply,” she said in the memo, which was posted on Twitter.

“Whilst the Foreign Office has long had a rule restricting the nationality of employees or secondees, the extension of the bar to advisory work seems to be new. However, it is for the Foreign Office to determine what its national security arrangements are, and their legality, not for us.

“We are standing firm to our principles of academic independence and valuing our truly international community of scholars. We will continue to stand by our colleagues and we strongly value the work that you all do.”

Steve Peers, a professor of EU law at the University of Essex who has advised the government, said it should be “perfectly possible to get useful input from some of the best-qualified people in the country” without anything sensitive being revealed.

“I don’t really get the security or sensitivity argument,” he said. “Whatever the reasons, this will come across as hostile, narrow and xenophobic.” He tweeted:

One of the best EU political scientists in the country
What kind of know-nothing nativist govt rejects the expertise of all non-citizens? https://t.co/Dm6N0x51Lp

Legal experts questioned whether the FCO could be in breach of UK public procurement law by requiring the work be carried out by British nationals. Albert Sanchez Graells, a senior law lecturer at Bristol university, said it “definitely” would be if the work was in the context of a services contract.

@DavidAllenGreen if this was in context of a services contract, most definitely. I am happy to provide free legal opinion on this @LSEnews

Simon Cox, a migration lawyer at the Open Society Justice Initiative, said it might be possible for the government to legally restrict high-level advisers to British citizens, but added that the way the situation had been handled was “beyond disrespectful, and in a worryingly xenophobic context”.

UK in a Changing Europe, a think tank on UK-EU relations of which Hagemann is a senior fellow, said it believed there was “a more pressing need than ever before for academic expertise to inform the multitude of difficult decisions to be taken in connection with Brexit” and that it would continue to publish research “whatever the nationality of the author”.

Separately, the Guardian has learned that another EU national – a migration specialist who asked not to be identified – was approached by a private recruitment firm for a Foreign Office post for which she was well qualified, but informed after several conversations that only British citizens would be eligible.

European academics, who make up about 15% of research and teaching staff at British universities, responded with dismay. Jan Eichhorn, a fellow in social policy at Edinburgh university, tweeted: “For the first time this makes me question whether it makes sense to continue working at a UK university as an EU policy-focussed academic.”

The government has come under sustained fire over immigration since the Conservative conference when the home secretary, Amber Rudd, said it was considering requiring companies to declare the proportion of international staff in their workforce.

Ministers were said to want to see lists of companies published and those employers with the highest proportions of foreign staff “named and shamed” for not employing British people when they could.

Rudd, who was forced to defend herself on radio against allegations of xenophobia, also announced a crackdown on overseas students and work visas, and pledged to prevent migrants “taking jobs British people could do”.

Theresa May was also accused after her conference speech of stoking anti-immigrant sentiment in the country by playing to fears about the impact of foreign workers on jobs and wages.

The Prime Minister said the EU referendum result legitimized a tougher line on immigration and some people did not like to admit that British workers could “find themselves out of work or on lower wages because of low-skilled immigration”.