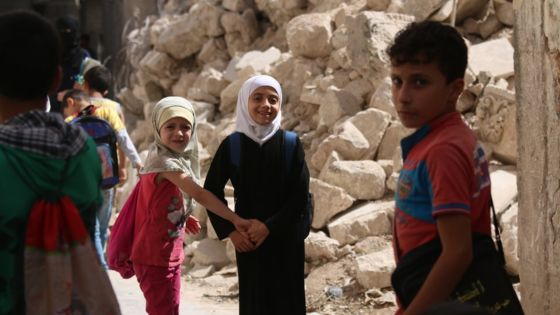 The Aleppo that Ibrahim al-Haj’s son Laith was born into 10 months ago is now being destroyed.

The opposition-held districts of the Syrian city have been surrounded and under siege for months. Russian and Syrian warplanes are bombing the streets into rubble and government forces are chipping away at the pocket of opposition control. For the 270,000 people holding out there, everything is getting harder to find — food, drinkable water and fuel. Residents are planting vegetables in bomb craters and digging wells.

Al-Haj and his wife increasingly argue over what to do for Laith’s future. And there’s a more immediate issue: What to feed him. His mother is weaning him off breast milk, but there’s little else to give him. So he eats what his parents do. Grains, thyme and cracked wheat.

“It’s better than him not growing,” al-Haj said. Potatoes, the little boy’s favorite, are a distant dream. “The hardest thing about the siege is when your son asks you for something and you can’t get it for him.”

Families like al-Haj’s across Aleppo’s opposition-held eastern districts are wrestling with how to get by day to day. They’re also weighed down with the fear that all their dreams for the crown jewel of the opposition’s territory are on the verge of collapse. Al-Haj and others in the besieged city spoke to the AP by telephone through an Internet connection.

Ever since it joined the uprising four years ago, eastern Aleppo tried to make itself a model for a Syria without President Bashar Assad. It elected local leaders, ran its own education system and built an economy trading with the rebel-held countryside and neighboring Turkey. Its residents were able to keep life going amid four years of ferocious fighting with the pro-government western districts.

Now all that is breaking down. The local council and rebels had prepared for siege, stockpiling food and fuel. But their plans risk being overwhelmed under the pounding of missiles and bunker-busting bombs in the most relentless assault Aleppo has ever seen.

“By Day and By Night, Life is Hard”

Near Aleppo’s Old City, Zahraa al-Sayed tugged the children by the hands down the street, hurrying to stay under the shadows of the balconies.

A drone was hovering over their heads. She felt tagged as a target.

She was holding her 6-month daughter in one arm and her 8-year-old son by the other hand, followed by his three cousins, leading them to the building where their school is held.

“What exactly are they filming? A woman and four children?” the 29-year-old al-Sayed said, growing agitated as she recounted the scene to The Associated Press. “In the middle of all this destruction, they still keep an eye on us.”

The school is one of the few still operating. Most have closed amid the bombardment. To keep herself busy, al-Sayed teaches at the same school.

In April 2015, while she was out shopping with her mother, an airstrike crushed her parents’ home and killed her father and two of her three brothers. “With one missile, I lost my family,” she said.

Now amid the siege, she said, “I am trying to have a normal life. To be a wife and husband with their children, and maybe have a garden for them to play in.”

Any cooking is done on wood fires, streaking the walls of their home with soot. “Even making a cup of tea to start the day is an ordeal,” al-Sayed said. Mostly they eat zaatar — a dried thyme mix — and olives. Fried eggplants are a treat. Once a week, they have a plate of rice and meat.

To ensure a water supply, her husband, Mohammed Zein Khandakani, dug a well and is sharing the cost of a generator with neighbors to pump it. It’s enough for essentials and for showers every other day. But it’s a dangerous walk to the well with the warplanes overhead.

Everyone is dealing with tragedy even while finding ways to get by.

When a strike killed his best friend, Ahmed Farawati started a garden of greens and vegetables in the rubble of his friend’s home.

“Every day I water the plants and I remember my friend, who was like a brother,” the 21-year-old Farawati said. “The plants will also be useful in this siege.”

Aleppo was Syria’s largest city and its commercial center, with a sense of its own identity and pride bolstered by a unique cuisine, distinct local culture and millennia of history in its Old City.

When anti-Assad protests erupted across Syria in 2011, affluent merchants and professionals centered in Aleppo’s western districts shunned the uprising.

The eastern parts, however, eventually threw in enthusiastically with the opposition. The east was Aleppo’s poorer section, crowded, industrial and more religiously conservative. When rebel fighters from the rural north arrived in the summer of 2012, eastern Aleppo became the opposition’s biggest urban holding.

It was never an easy hold. The government has wreaked destruction in fighting to regain the lost half of the city. It has been four years of stalemate, with neither side able to make significant gains.

But the balance of power changed when Russian warplanes joined the fight in late 2015. Backed by airstrikes, government forces advanced until they cut off all access to eastern Aleppo in July, sealing off a pocket about eight miles long and three miles wide.

In late September, government forces began their assault to crush that enclave after the collapse of a Russia-U.S.-brokered cease-fire. Hundreds have been killed since.

The siege is the greatest test yet for the opposition’s ability to run the city.

The council is scrambling to keep its emergency plans functioning despite the pounding from the air. Strikes have hit council offices and vehicles. Staffers have been killed. Two field hospitals were put out of service by bombings, leaving only six with a total 35 doctors to serve 275,000 residents.

One morning last week when Zakaria Amino, the deputy head of eastern Aleppo’s local council, got to his office, he found it surrounded by a crowd of angry residents.

“Hey, hey, hey, the council is bunch of thieves!” they shouted.

They were furious over new bread rationing. “They are accusing us of stealing” bread, Amino said.

Before Assad’s troops sealed the siege, the council rushed in and stockpiled 2,000 tons of wheat and 250 tons of flour.

Two weeks ago, the flour ran out, so the council began rationing the remaining wheat.

Every four-member family gets six loaves of bread every two days for the equivalent of 15 cents, 10 times the pre-rationing price. Larger families get a larger allotment. Black market bread, if it can be found, runs at 80 cents for six loaves.

Gunfights have broken out in bread lines as some tried to get more than their share. Also, airstrikes have hit the lines. So the council recruited a fleet of distributors who take bread directly to neighborhoods.

Amino tried to reassure the angry crowd, saying the council will create family ID cards to better manage distribution. He told them a plot of land has been allocated to plant wheat.

That plot of land is in the neighborhood of Sheikh Saeed on the southwestern end of the pocket. With the largest arable area in eastern Aleppo, it’s the potential breadbasket for surviving siege. Already, it is producing some vegetables.

Government forces are determined to take it.

Heavy clashes have raged for days as troops backed by Iraqi Shiite militias try to advance. So far, the rebels have fended them off because they control nearby hills, according to Molham Ekaidi, deputy commander of Fastaqim, one of Aleppo’s biggest rebel factions.

But Assad’s troops had more success at the northern end of the enclave, where the land is more open.

Last week, they pushed through Awija, a deserted industrial district. They quickly advanced past quarries and factories — including a beer factory, testimony to the city’s bygone diversity — snatching more than a mile off that end of the pocket. Then they came to a stop, meeting greater resistance at the edge of a built-up residential area.

The battle to defend east Aleppo is tough but it’s far from over, said Ekaidi, 27, who was once an architecture student but took up arms in 2012 after watching videos of government massacres in the city of Homs.

Government forces have difficulty fighting on more than one front at a time, he said.

Also, without close air support, they lose their advantage. In some places, the two sides are separated only by a street, too close for an aircraft to target rebels precisely. That evens the fight, and the thousands of rebel fighters are well armed, replete with 23mm anti-aircraft machine guns and tanks.

“No one can withstand an eternal siege, but we have prepared for a long siege and a very long battle,” Ekaidi said.

Like many others here, he struck a defiant contrast with a past Russian siege: Moscow’s devastating 1999-2000 campaign that blasted the capital of Chechnya into submission.

The tensions are trying for everyone.

Al-Sayed worries about the approaching winter and her kids’ diminishing energy levels. She said she won’t leave Aleppo because she wants somehow to see justice for her lost family.

She watches airstrikes from her balcony, not bothering to take cover.

“When a bunker-busting bomb hits, it will get me wherever.”

Not a moment passes, she said, without her looking at every detail of her life and saying: “Oh God. How can this be?” She doesn’t understand how, even as governments round the world denounce the Aleppo siege, nothing is done.

“Every moment passing is at our expense. Instead of 110 warplanes, they will become 120. We are losing land, martyrs … while the debates go on.”

Al-Haj, meanwhile, fears for his marriage. He and his wife constantly bicker over the lack of food and other goods. They used to get on well, he said.