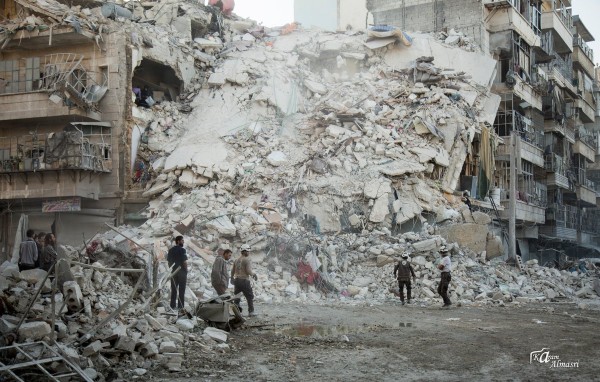 PHOTO: Men stand in front of a bombed area in al-Qaterji in east Aleppo, October 17, 2016

Life Under Siege in East Aleppo

UPDATE 1230 GMT: Footage of clashes between pro-Assad forces and rebels on the front southwest of Aleppo city, battling for control of an air defense base:

ORIGINAL ENTRY: Russia and the Assad regime are preparing to renew their bombing of Syria’s largest city Aleppo, after announcing the end of a “pause” in the assaults.

Moscow, which has come under political pressure for the month-long strikes that have killed more than 600 civilians, announced a suspension of the attacks last Tuesday. It extended the pause on Thursday, claiming that “corridors” would allow residents and surrendering rebels to leave east Aleppo.

On Saturday, Russian outlets said “not a single civilian” had been able to exit, blaming rebel shelling of crossings.

The Syrian opposition and rebels say the “corridors” are a PR ruse, with residents unable to cross to regime neighborhoods without fear of being shot by pro-Assad snipers. They claim regime forces attacked the crossings.

The Governor of Aleppo Province, Hussein Diab, making an appearance near the Bustan al-Qasr crossing, backed up the Russian line on Saturday. He insisted that “the terrorists want to use locals as human shields”.

Residents of east Aleppo protest on Saturday against the Russian-regime bombing and siege:

"Damn you Hafez, Damn you Anisa!" Residents of besieged Aleppo protest against the regime & demand the release of the siege. pic.twitter.com/WCjpOdCewp

In late August Russia and pro-Assad forces re-imposed the siege on opposition areas, with about 275,000 people.

On September 19, after a brief ceasefire brokered by the US and Moscow, Russian and regime air forces began their assault with the destruction of a UN aid convoy west of Aleppo. They then began incessant bombing of the opposition districts in the city.

France has led the international community in condemnation of Russian complicity in regime “war crimes”. However, Russia vetoed a Security Council resolution for a new ceasefire, aid, and suspension of military overflights.

No action has been taken against Moscow. Despite a US claim of Russian “barbarism”, Washington is still in contact with Moscow about resuming a political process, with an international meeting held last weekend. European Union leaders met last week, but could not agree on any steps beyond the addition of about 20 regime figures to a sanctions blacklist.

The Kremlin has said that President Assad must remain in power as all of Syria is “liberated”.

Spokesman Dmitri Peskov said calls for Assad’s departure are “thoughtless”: “There are just two options: Assad sitting in Damascus or the Nusra [the jihadists of Jabhat Fatah al-Sham, formerly Jabhat al-Nusra] sitting in Damascus. And Assad must sit in Damascus to ensure a political settlement.”

Before Russia and the regime imposed their siege on Aleppo, there was speculation that Moscow must be willing to see Assad go — after a transitional period — if the regime remained in place.

Peskov added on Saturday, “Everything should be done to hinder the breakup of that country into any parts, which may have most catastrophic consequences for the region.”