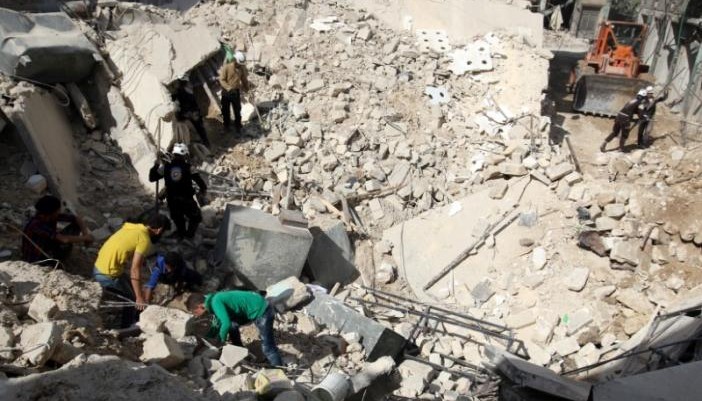 On Tuesday, the UK Government was pushed into an emergency Parliamentary debate on Syria by the Russian-regime bombing of Aleppo.

After a few hours, Foreign Secretary Boris Johnson shut down the discussion — there will be no protected zones to protect civilians because one would have to be ready to confront Russian and regime warplanes who defied the suspension of overflights. Instead, Johnson said people could demonstrate outside the Russian Embassy.

Meanwhile, more than 50 people were killed by Russian-regime attacks on Aleppo.

The Guardian juxtaposes the two scenes:

As British MPs debated the war in Syria, and possible ways to end the bloodshed, the medics and rescue teams of east Aleppo were going about their grim daily task of picking through rubble left by airstrikes and patching up survivors.

“Sorry for being late, but there was a massacre,” Hamza Khatib, one of the handful of medics still working in rebel-held Aleppo, told the Guardian on a brief break from tending to victims of Tuesday morning’s bombing raids.

The explosions began at about 10 am local time (8 am UK time), as British MPs were having breakfast and preparing their notes for the debate. Fighter jets had roared into the skies over east Aleppo, ending several days of relative calm with a barrage of bombs.

“Its been a hellish day, we had more than 25 airstrikes. The civil defence are trying to get the bodies out from under the rubble in many neighbourhoods,” said Ismail al-Abdullah, one of the civil defence, or White Helmet, staff who organise search and rescue.

They ripped through one of the few remaining markets in the city and into homes across several neighbourhoods, causing such devastation that four hours later rescuers had still not reached some sites.

“We couldn’t respond to all of them at first, because we had already sent all the teams in other bomb sites,” Abdullah said as the debate got underway in Westminster. “Now we are waiting to finish there to go to [the next one].”

If bunker-buster bombs had been used, there was little hope of finding people alive, he said, but survivors from other sites were raced to hospital.

“We had two brothers from one family. One of them died and the other was crying, screaming in the hospital ‘my brother’, ‘my brother’,” said nurse Mohammad al-Shaghel. “Their home was hit.”

The hospital’s emergency room was full for five hours, with medics scrambling to treat about 40 patients. Several died, and it was not until two hours into the debate that Shaghel had time to break off from treatment to do a brief interview.

“Today our hospital is full, until now,” he said. “A lot of children, old men, women – I don’t know what to say, I don’t know how to describe it. It is a very bad day. There are injuries in head, chest, abdomen, legs.”

The doctors treating victims of airstrikes live with the constant threat that they could be next on the operating table; the few hospitals still operating in the opposition side of Aleppo have been targeted several times.

“At the moment we have an aircraft in the sky above the hospital, so we are hoping that we won’t get hit,” said Khatib, who lost two patients on Tuesday morning alone.

As MPs debated the risks and benefits of a no-fly zone, he said it was the only hope for about a quarter of a million people in rebel-held Aleppo.

“The only thing that we really need is to stop the main source of the violence and killing: Russia and the regime aircraft. We don’t want medical aid, we don’t want food – that will make us last longer, but if there is still bombing, it will not save our lives.”

Monther Etaky, a journalist, stayed home with his wife and baby son during the debate. He had raced back to comfort them after the bombardment began and, with a surveillance plane circling overhead, said he was worried the jets would return. “Even the small children in Aleppo can recognize every plane by its sound now,” he said.

Like many in Aleppo, he is frustrated by the international attention focused on a proposal from the UN special envoy to Syria. Staffan de Mistura has offered to personally escort the most radical rebel faction out of Aleppo if doing so would bring a halt to the bombardment.

For many in Aleppo, the debate was just another day of talking that will bring no change in their suffering.

“There are debates and speeches outside Aleppo, and Assad and Russians are killing us inside,” said activist Abdulkafi Alhamdo. “We need deeds, not words.”