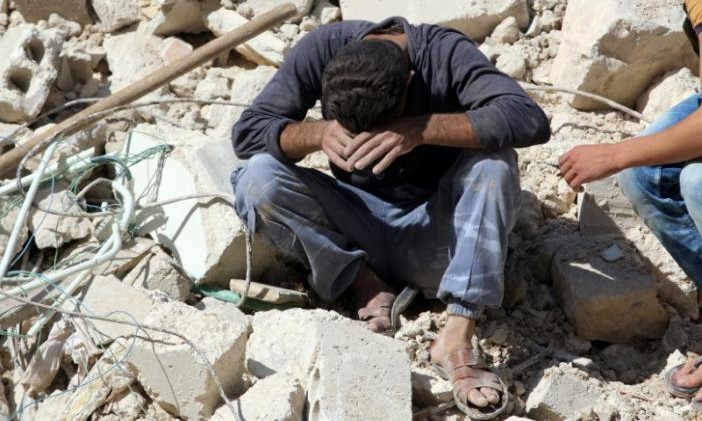 PHOTO: A man cries for relatives killed by an airstrike in the al-Qaterji neighborhood of Aleppo on Tuesday (Abdalrhman Ismail/Reuters)

Video: Orphaned and Trapped In Aleppo — Sidra’s Story
Syria and Beyond Opinion: Killing the Doctors

UPDATE 1900 GMT: According to an Iranian outlet, Tehran has put an immediate dent in the prospects for renewed talks, saying it will not attend the discussions in Switzerland on Saturday.

UPDATE 1740 GMT: Russia is claimed that it will restart the political process with the US, despite Washington’s declaration that it has suspended the cooperation over the bombing of Aleppo.

Russian Foreign Minister Sergei Lavrov told CNN that the meeting should include Turkey, Saudi Arabia and possibly Qatar: “We would like to have a meeting in this narrow format, to have a businesslike discussion, not another General Assembly-like debate.”

The Russian Foreign Ministry later said the meeting will take place in Switzerland on Saturday:

According to the agreement between Russian Foreign Minister Sergey Lavrov and US Secretary of State John Kerry, the meeting of foreign ministers of Russia, the US and key regional states to consider possible additional steps to create conditions for the settlement of the Syrian crisis will take place in Lausanne on October 15.

The Ministry said that Iran will also be present.

The US State Department framed the development in a different way, with the State Department indicating that it had invited Russia to Lausanne on a multilateral basis with other members of the International Syria Support Group.

Spokesman John Kirby said the Russians will be present, leaving it to other countries to confirm their attendance. He said the focus would be on getting a new ceasefire and provision of humanitarian aid.

Lavrov said he hoped the discussion might “launch a serious dialogue on the basis of the principles contained in the Russian-American deal”, a week-long ceasefire that collapsed on September 19, just before Russian and regime warplanes destroyed a UN aid convoy west of Aleppo.

Despite the attack, the Foreign Minister blamed Washington for the failure, pointing to a US airstrike the previous week which killed more than 60 regime troops in Deir ez-Zor Province in eastern Syria, near a frontline with the Islamic State.

Washington said the incident was an accident, as it might to target ISIS.

“The violation of the ceasefire happened by the American coalition who attacked the Syrian government, which they were not supposed to do, and which they said they would never plan,” Lavrov said.

The Aleppo Media Center reported that strikes targeted an open-air market in the al-Firdous district.

Ibrahim Abu Layth, the spokesman for the Aleppo Civil Defense, said, “We’re still continuing to pull bodies — both casualties and the injured — from underneath the rubble.” 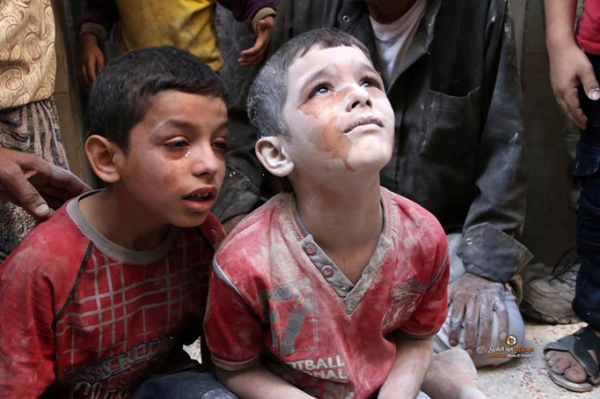 Dust-covered boys after an airstrike on Wednesday (Mahmoud Rslan)

There have also been casualties from pro-Assad attacks near Damascus:

An airstrike targeted the center of #Saqba town in Eastern Ghouta today, 22 civilians were injured.https://t.co/wo1zvGEiTx

UPDATE 1730 GMT: Russian President Vladimir Putin has turned against France, accusing it of deliberately luring Moscow into vetoing a UN resolution on Syria.

On Saturday, Russia blocked a Franco-Spanish resolution for a ceasefire, humanitarian aid, and suspension of military overflights.

He said claimed that French Foreign Minister Jean-Marc Ayrault was told in Moscow last week that Russia would not use its veto if France made some amendments.

“We expected joint, constructive work with France and with other permanent members of the Security Council. But what happened?,” Putin asked:

The French foreign minister flew from Moscow to Washington, the next day he came out with [US Secretary of State John] Kerry, accused Russia of all the deadly sins, no one spoke to us or discussed anything with us, and tossed the resolution into the Security Council obviously expecting our veto.

What for? Knowing our position, and not discussing it with us, they didn’t chuck in the resolution so it would pass. But to get the veto. What for? To exacerbate the situation and to whip up anti-Russian hysteria in media under their control, and to deceive their own citizens.

“I don’t know if that corresponds to the interests of European countries or not. But to just service like this the foreign policy interests, or maybe even the domestic political interests, of their allies, in this case the United States?…

Is that really the role of such serious countries which aspire to conduct independent policies and be called major powers. I don’t know.

In the French Parliament, Prime Minister Manuel Valls repeated that Moscow is propping up the Assad regime and carrying out war crimes in its bombing of Aleppo: “Russia has a responsibility and I call on it to assume its responsibilities to end this massacre. We will continue talking to them, but not in vain.”

Russian warplanes struck Daret Izza, Firdous, and the Bustan al-Qasr district, near the crossing between opposition and regime areas. Residents, rescue workers, and the Local Coordination Committees said at least 50 people were killed in and near the city.

The Russian attacks came after rebels fought back against the advance of pro-Assad forces in northern Aleppo, reclaiming a water station. However, the Syrian military claimed that it had consolidated its control of a roundabout at a major intersection.

On the southwestern front, a battle continued for rebel-held Sheikh Saeed. The area is near Ramouseh, the town recaptured by pro-Assad forces — after intense Russian airstrikes — to reimpose a siege on opposition parts of Aleppo in late August.

Russia and the regime renewed airstrikes on Aleppo on September 19, beginning with the destruction of a UN aid convoy, hours after the Syrian military declared an end to a ceasefire arranged by the US and Moscow. More than 500 people were killed in attacks from September 22 to October 5.

Facing international condemnation for its “barbarism” and allegations of complicity in “war crimes”, Russia then reduced its attacks. However, on Saturday Moscow vetoed a UN resolution for a ceasefire, humanitarian aid, and suspension of military overflights.

Turkey has backed the Syrian opposition and rebels, but Moscow and Iran — the other major ally of the Syrian regime — have been trying to distance Ankara from any attempted overthrow of President Assad. 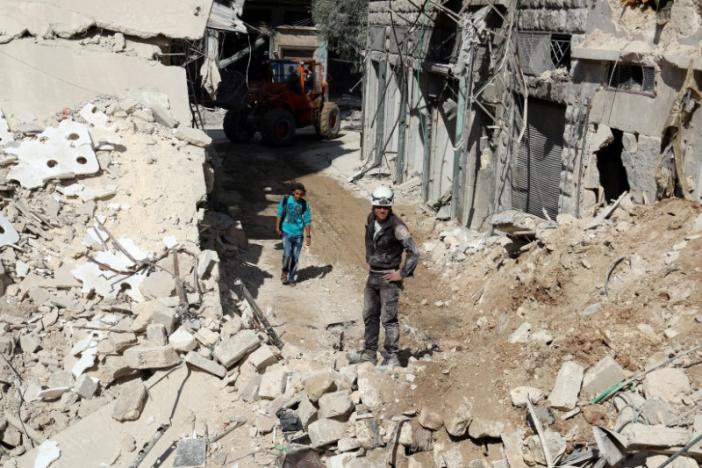 Syria Direct reports on about 300 displaced families living in a concrete cow barn in southwest Daraa Province in southern Syria, a few kilometers from the Jordanian border.

Many of the families fled their homes in the Yarmouk Basin amid battles between Islamic State affiliates and rebel factions. More recent arrivals are from opposition towns that are being bombed by regime forces.

The supervisor of the camp says local authorities lack the funds to provide health care, sanitation, and humanitarian aid.

“There are about 150 children under the age of two who need milk,” says Abdullah, a member of the Daraa provincial council. “We fear that diseases such as malaria and typhoid will spread.”

“We’re people, but we’re living with animals,” adds Abu Mohammed, a barn resident whose family fled their home with “nothing except the clothes on our backs.”

Russia and the Assad regime have bombed a Palestinian refugee camp southwest of Damascus for 11 days, killing five people and destroying the only hospital.

The assault on the Khan al-Shih camp began on October 1, as pro-Assad forces tried to advance on the ground.

Khan al-Shih is about 25 km (16 miles) from Damascus in an opposition enclave surrounded by the Syrian military and its allies.

“Bombings happen every night; five residents have died, including two children, and 34 have been injured,” Abu Muslim al-Derani, a councilman in the camp, said on Tuesday. “These have been the worst days since the beginning of the revolution.”

Aid organizations that operate in the camp say residents actively block militias from operating there.

Al-Derani explained, “There are no military factions inside the camp. All of them are in the agricultural areas that surround the camp.”

Before the war, Khan al-Shih was home to more than 30,000 refugees. There are now about 12,000 Palestinian refugees and 800 displaced Syrian families in the camp.

With no safe route in or out of the camp, residents are running out of fuel, food, and medicine.

Hezbollah leader Hassan Nasrallah has declared a US-Saudi-Israeli plot to prevent a political settlement in Syria.

Speaking at a religious ceremony in south Beirut on Tuesday night, Nasrallah said the Saudi goal is “to defeat Syria in favor of the Israelis” because the Assad regime is the cornerstone of “the Resistance”:

That’s why they refuse any political solution and want to keep the bloodshed. That’s what the US and Israel want and what some regional and Gulf states help to achieve.

Nasrallah said that Riyadh must accept a transition in which President Assad can stand for re-election.

,” he said, adding that “if it [Saudi Arabia] wants good for the Syrian people, it has to accept the political solution, lining up the transitional government and holding the election” without putting conditions on presidency candidates.

The Hezbollah Secretary-General went farther in claiming that the US is trying to “concentrate” the Islamic State in eastern Syria and along the Iraqi border: “The US wants ISIL [the Islamic State] to prevail.”

He said both the Islamic State and the jihadists of Jabhat Fatah al-Sham, formerly Jabhat al-Nusra, are being used to serve Israeli objectives.

The jihadists of Jund al-Aqsa have released 57 rebels as part of a deal to end in-fighting.

The confrontation undermined a rebel offensive that had taken a series of towns and villages in northern Hama Province.

Jabhat Fatah al-Sham, formerly Jabhat al-Nusra, stepped in as a mediator last week. On Sunday, it announced an arrangement for the dissolution of Jund al-Aqsa, with members joining JFS/Nusra and a commitment to eradicate any Islamic State sleeper cells.

A judicial committee will consider claims from each side of abuses.

Rebels have established a camp for former Islamic State militants and their families in northern Syria.

The rebel faction Jaish al-Tahrir is running the camp for about 300 defectors and captured combatants, including many non-Syrians.

We tried to rehabilitate them and alter their state of minds. Those who wished to return home were allowed to call their embassies and co-ordinate with them through us.

Among the group are French, Dutch, and Polish nationals and fighters from North Africa and across the Middle East and Central Asia.

Ghabi said the numbers are growing as the Islamic State is pushed back in northern Syria by rebels, including a force supported by Turkish intervention from late August. 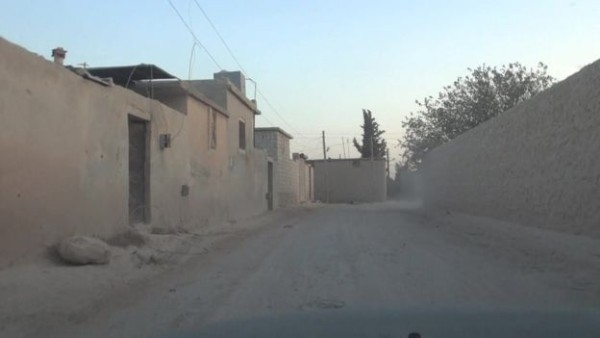 State Media: 6 Killed by Rockets on School in Daraa

State media say six people, including five children, were killed by a rocket attack on a school in Daraa city in southern Syria.