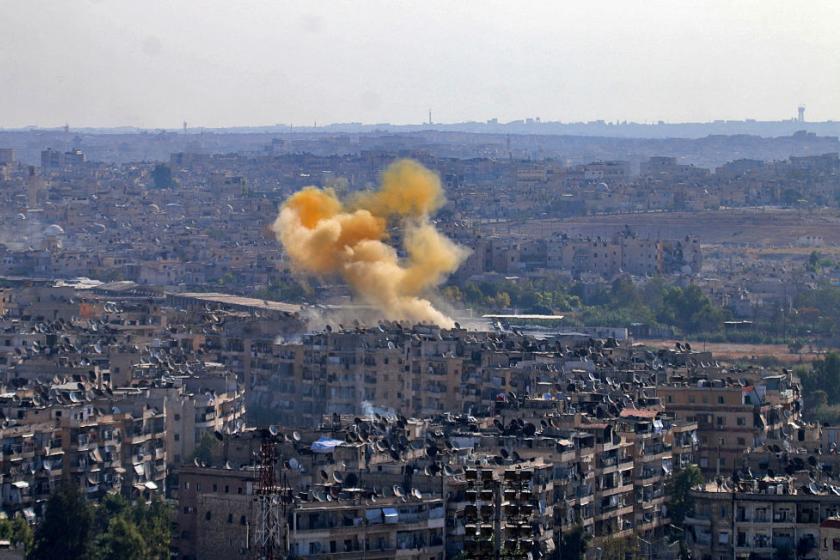 PHOTO: Smoke rises from an attack on Aleppo on Sunday (Getty)

Regime Steps Up Pressure on Damascus Suburb of Douma

UPDATE 1300 GMT: The regime air force has dropped leaflets over east Aleppo warning, “This is your last chance….If you do not abandon this city, you will be eliminated.” 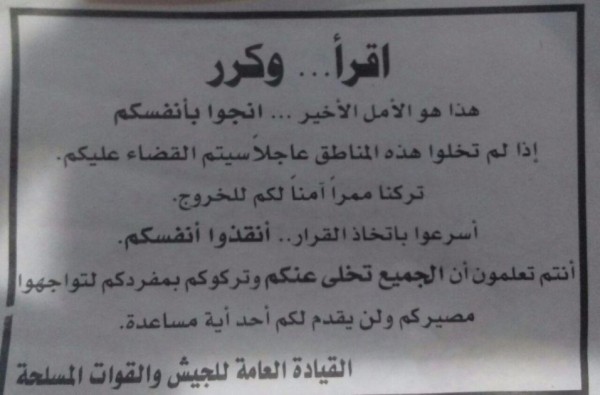 Another leaflet, directed at rebels, features crossed-out images of rebel commanders who have been killed with the warning, “This is your destiny”: 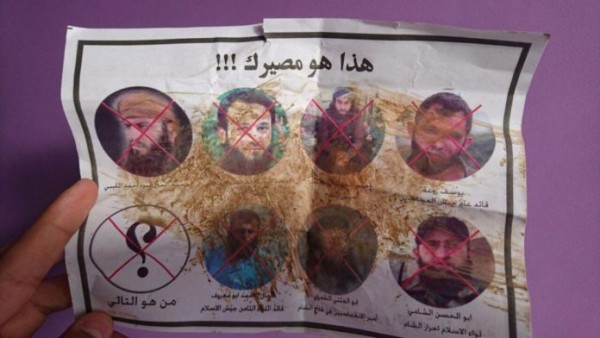 But some residents are defying the threats:

#Assad forces throwing leaflets( Read this is the last chance for you), #Aleppo people found it and use it as paper for the cigarette 😂 pic.twitter.com/fOx4qg2K4Y

Districts attacked in eastern Aleppo city included Sukkari, Ameriya, Mashhad, and Marja. The number of casualties was limited, compared to the more than 600 who died in the month-long Russian-regime strikes from September 19; however, they are expected to rise as attacks escalate in coming days.

Rebels responded with shelling of regime-held districts such as Hamdaniyah.

Supported by airstrikes, pro-Assad forces also battled rebels on the front southwest of Aleppo, including an attempt to control an air defense base. Regime artillery shelled Khan Touman, the town on the Aleppo-to-Damascus highway captured by rebels in April.

Moscow announced a suspension of attacks last Tuesday. It extended the pause on Thursday, claiming that “corridors” would allow residents and surrendering rebels to leave east Aleppo.

Russia and the Assad regime re-imposed a siege on opposition areas of Aleppo in late August. However, they faced international condemnation since they destroyed a UN aid convoy on September 19, followed by the incessant assault on eastern Aleppo city.

On Saturday, Russian outlets announced the end of the “pause”, saying “not a single civilian” had been able to exit.

Moscow blamed rebel shelling of crossings, but the Syrian opposition and rebels said the “corridors” were a PR ruse, with residents unable to cross to regime neighborhoods without fear of being shot by pro-Assad snipers. They claim regime forces initiated the attacks on the crossings, trying to advance into opposition areas.

Despite declarations of Russian complicity in the regime’s “war crimes”, the international community has not taken any action against the siege and bombing.

Russia vetoed a UN Security Council resolution which called for a new ceasefire, aid, and a suspension of military overflights. The US said that it would suspend contacts with Moscow, but soon included the Russians in international discussions. The European Union failed on Friday to agree on any measures, with Italy among those blocking any sanctions on Moscow.

French Foreign Minister Jean-Marc Ayrault tried on Saturday to rally support for more sanctions on Syria, after a UN report blamed the Assad regime for a third chemical attack.

I want…a clear condemnation of these crimes in a resolution from the UN Security Council…that places the perpetrators under sanctions.

The Syrian army and Daesh [the Islamic State] have used chemical weapons against civilians on at least three occasions. These acts are inhuman and unacceptable.

Rescuers work on Sunday night after a Russian airstrike on Kafr Takharim in Idlib Province in northwest Syria:

A rebel commander says the Turkish-rebel offensive on the Kurdish militia YPG has been called off.

Abu Firas of the Sham Front said the move on the town of Tel Rifaat was cancelled because of “international matters”.

Turkey carried out airstrikes on YPG positions inside Syria for the first time last Wednesday, and the Free Syrian Army and other units began ground attacks on Friday.

However, on Friday the US Defense Secretary Ashton Carter visited Ankara. Washington supported the YPG-led Syrian Democratic Front, which has been pushing back the Islamic State last autumn.

Abu Firas said the Turkish-rebel force would now look towards the ISIS-held town of al-Bab, northeast of Aleppo city.

The YPG, the military branch of the Syrian Kurdistan Democratic Union Party (PYD), and rebels have battled since last year. In early 2016 the YPG took opposition territory, including Tel Rifaat, in northern Aleppo Province.

Turkey considers the PYD and YPG to be part of the Turkish Kurdish insurgency PKK.

The Assad regime has allowed aid into the Damascus suburb of Moadamiya, which surrendered to regime forces last week after a four-year siege.

Syrian State media reported that an aid convoy of 24 trucks entered the town, southwest of the capital, on Sunday.

The town finally capitulated after a siege which has caused the deaths of scores of people from starvation and the ongoing threat of malnutrition for thousands who remain. Moadamiya was also subjected to regular bombardment; just before its surrender, an ultimatum warned that ground forces would overrun the town.

About 1,200 fighters and their families left for Idlib Province in northwest Syria.

The capitulation of Moadamiya followed that of nearby Darayya in late August and Qudsaya and Hameh to the northwest of Damascus. 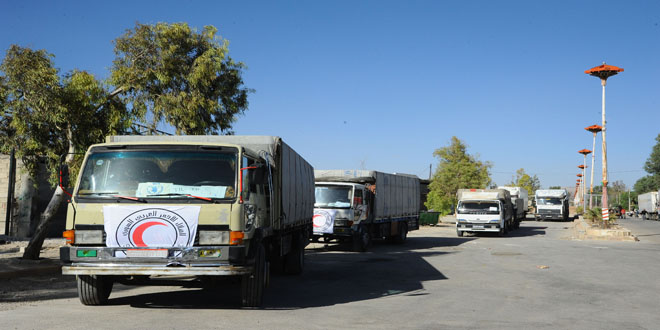