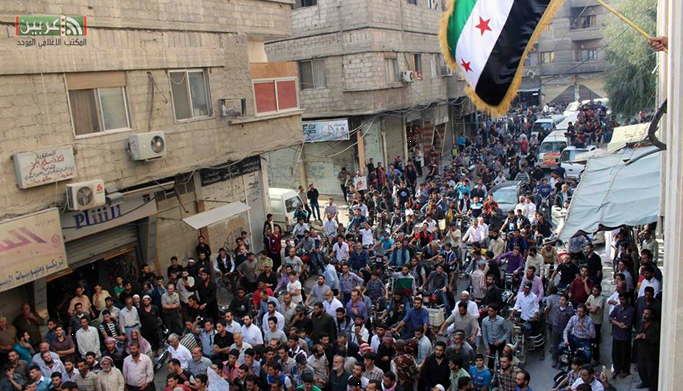 The Syrian military and allies have increased pressure on the key Damascus suburb of Douma, the base of the prominent rebel faction Jaish al-Islam.

Warplanes pounded the east Damascus suburbs all weekend, with more than 40 barrel bombs and vacuum missiles supporting regime and Hezbollah advances on nearby al-Rihan, which borders two hilltop villages.

The Syrian military and its allies captured a strategic rebel base in East Ghouta late last month, opening an eastern front for the shelling of Douma, less than 3 km (2 miles) away.

“If things keep going as they’ve been going, soon enough those green buses [removing civilians and rebels from other Damascus suburbs] are going to be pulling up to take us to Idlib or Daraa,” Abu Mohammad, an East Ghouta resident, said.

On Friday, hundreds of protesters marched 5 km (3 miles) through the Damascus suburbs, demanding that the Failaq al-Rahman and Jaish al-Islam factions settle their internal differences and unite in the fight against the regime.

However, Failaq al-Rahman soldiers in Zamalka — objecting to an advance on their headquarters — fired their guns into the air and dispersed the crowds, as troops skirmished with demonstrators.

The spokesman for Failaq al-Rahman, Wael Alwan, responded, “A protestor hit one of our men and tried to grab his weapon, which left him with no choice but to shoot into the air in order to disperse the crowd.”

The faction released an official written statement on Saturday, promising to investigate the incident and those who fired their weapons: “We affirm that protesting is the unimpeachable right for all Syrians.” 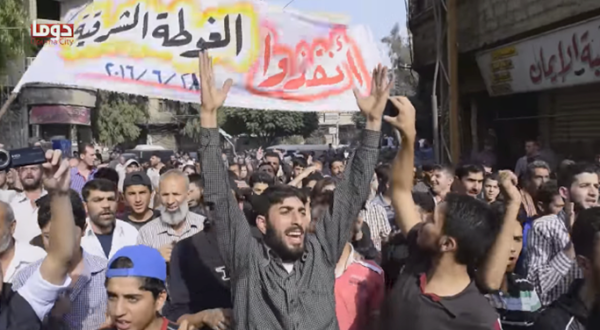 Douma has been surrounded since June 2012. However, its situation has become more precarious since May, when pro-Assad forces took advantage of the rebel in-fighting to seize much of the southern part of East Ghouta, including valued agricultural land.

Since then, the regime has carried out near-daily artillery shelling on Douma, tightening the siege amid shortages of food and medical supplies.