Syria and Beyond Opinion: Killing the Doctors 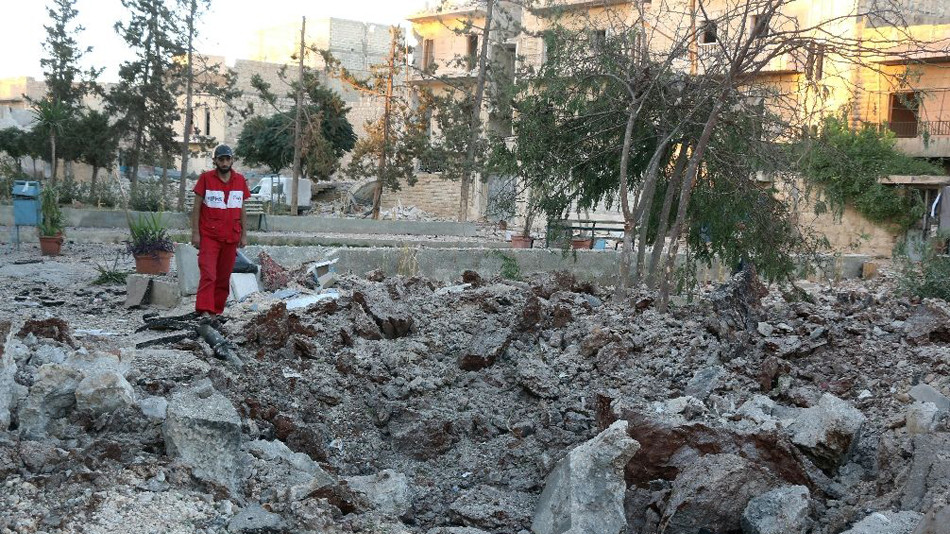 PHOTO: Rescue worker stands in the rubble of the M10 hospital in eastern Aleppo, bombed by Russian-regime warplanes, October 1, 2016

Paul Mason writes for The Guardian:

A single day of fighting in June 1859, among the vineyards and villages near Lake Garda, left 40,000 Italian, French, and Austrian soldiers dead or wounded. The Battle of Solferino might have been remembered simply for its carnage, but for the presence of Henry Dunant. Dunant, a Swiss traveller, spent days tending the wounded and wrote a memoir that led to the founding of the Red Cross and to the first Geneva convention, signed by Europe’s great powers in 1864.

Solferino inspired the principle that hospitals and army medical personnel are not a legitimate target in war. Today, with the bombing of hospitals by the Russians in Syria, the Saudis in Yemen and the Americans in Afghanistan, those who provide medical aid in war believe that principle is in ruins.

So far this year, according to Médecins Sans Frontières (MSF), 21 of their supported medical facilities in Yemen and Syria have been attacked. Last year an MSF hospital in Kunduz, Afghanistan was destroyed by a US attack, in which those fleeing the building were reportedly gunned down from the air, and 42 patients and staff died.

A UN resolution in May urged combatants to refrain from bombing medical facilities. MSF says that the resolution “has made no difference on the ground”. Four out of the five permanent members of the UN Security Council, it says, are actively involved in coalitions whose troops have attacked hospitals.

To understand the renewed popularity of killing sick people in hospital beds, it’s not enough to point – as MSF does – to the new techniques of war, such as drones and special forces. Something has been eroded about our perception of humanitarian principles.

The Red Cross was, at its inception, both a global humanitarian movement and an alliance of national, military-aligned volunteer units. The two did not seem contradictory. As long as a nation’s army’s hospitals obeyed the Geneva strictures – separating themselves from defensive military positions – civilian medics could volunteer on the understanding they would not be deliberately harmed.

That could not be further from the ideological framework under which modern wars are fought. Since the Rwandan and Bosnian genocides, and with the fragmentation of numerous states along religious or ethnic lines, the essential story of modern conflict has become “we, the normal folk, against an inhuman, alien and irrational foe”.

Though this meme was there in the wars of the Solferino era, it was also tempered by the desire to establish international law, and by the existence of labour movements capable of issuing cross-border appeals for “peace between brothers” – as both the French and Germans did during the Franco-Prussian war.

Once you understand that the enemy soldier lying on the operating table is someone’s son, and that your own son might be lying on the same kind of table across the lines, there is a logic to the principles of the Geneva conventions. But it is currently being trashed. If you want to point the finger, you could start with George W Bush. His administration’s refusal to treat al-Qaida detainees in Afghanistan as combatants, and its institutional tolerance of torture, sexual violence and extra-judicial killing set a baseline for the crimes currently being perpetrated by Saudi Arabia, Turkey, Russia and the Syrian regime.

The “collateral murder” video, among evidence alleged to have been released by Chelsea Manning, showed a US Apache helicopter obliterating an ambulance in Baghdad as it collected the wounded. This was done by sticking to the US military’s rules of engagement, not breaking them.

Since Iraq, state-sanctioned barbarity has of course been ruthlessly mirrored and bettered by the war criminals of Isis, for whom the Geneva conventions’ prohibitions read like a to-do list.

But there’s something deeper at work, eroding in our attitudes to mercy. The men and women Dunant inspired had a horror of war born of their experience of it: the more total it became, the more interest the population had in moderating military behavior.

Modern media coverage sanitizes war. Broadcasting rules in the UK, for example, place strict limits on showing death, mutilated bodies and the agony of wounded people – all the things that inspired Dunant to change the world.

Our grandfathers’ generation were surprised and shocked by the ways in which the Nazis broke the Geneva conventions. We have come to expect they will be broken in all wars.

Though the US has apologized for the Kunduz attack, and disciplined 12 people in the military for the errors that caused it, initial coverage in the US media actually justified the attack on the hospital because it was said to be treating al-Qaida fighters.

Now, as the Russian airstrikes against hospitals in rebel-held areas of Syria reach a crescendo, there is a campaign of justification centered around the accusation that the Syrian White Helmets – a medical relief group funded by both the US and EU – is “not neutral”. Regardless of the White Helmets’ funding by western powers, the issue of its neutrality is secondary to the fact that it is a medical organisation. It runs ambulances rescue services – and both are entitled to protection under the Geneva conventions, just as a British military hospital would be.

The Descent of Aleppo

The danger should be obvious. If we do not stop and punish the targeting of hospitals in the asymmetric wars, then the next big war – should it occur – will see the Geneva conventions go out of the window. Guernica showed a generation what the second world war would be like; Aleppo shows you what any future conventional conflict will descend to, if we don’t act.

But we need more than words around the UN table. We need a movement from below, such as the one that created the Red Cross, and which built MSF in the 1970s.

We need to understand – as the pioneering trauma medics of the 19th century understood – that if you tolerate inhumanity in war elsewhere, it can easily arrive on your own doorstep.