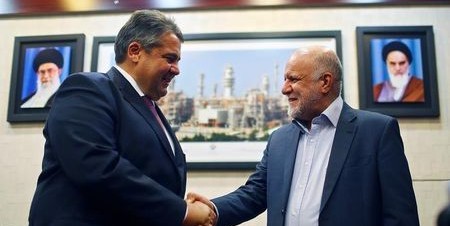 A high-level German mission for trade and investment appears to have collapsed in Iran, amid hardline criticism of the German Economy Minister, Sigmar Gabriel.

Both Foreign Minister Mohammad Javad Zarif and Speaker of Parliament Ali Larijani canceled meetings with Gabriel on Tuesday. No announcements were given, but State news agency IRNA said Zarif had a “busy schedule”.

Gabriel told reporters as he returned to Germany, “[This] is part of the internal Iranian election campaign,” with a vote for President scheduled for May 2017. “I felt appropriately received, particularly during the talks with the Vice President [Eshaq Jahangiri].”

The President of Germany’s DIHK Chambers of Commerce played down any difficulty. “Now confidence must be built up,” Eric Schweitzer said.

“I Would Never Let Such a Person Come to Iran”

Gabriel, who is also the German Vice-Chancellor, was leading a delegation of 120 business executives. Companies represented include Siemens, the SMS metallurgy group, Keller HCW, and Mitsubishi Germany.

On Monday, Gabriel met Iran’s Economy Minister Ali Tayyebnia to exchange 10 preliminary agreements for cooperation with Iranian companies. Among them was a contract for Siemens to upgrade Iran’s railway network, with components for 50 diesel-electric locomotives.

The German Federal Bank and the Central Bank of Iran also signed a cooperation agreement — a vital step, given the German banking sector’s reluctance to underwrite business deals because of fear of continued US sanctions.

However, as the ceremonies were taking place, head of judiciary Sadegh Amoli Larijani intervened with the declaration that Gabriel should have been denied entry to the country because of his criticism of Iran’s human rights record: “If I were in the government’s position or in the Foreign Minister’s shoes I would never let such a person come to Iran.”

Critics had also objected to Gabriel’s trip after he told the magazine Der Spiegel that the Islamic Republic can have normal and friendly relations with Germany “only when it accepted Israel’s right to exist”.

Zarif was forced to respond, “No one can set conditions for Iran and Iran is an independent country.”

The Rouhani Government has pinned hopes for economic recovery on expanded trade and investment deals, including with Europe, following January’s implementation of the nuclear deal between Iran and the 5+1 Powers.

There was a rush of optimism early this year as President Rouhani visited Italy and France to announce multi-billion-dollar deals. However, European companies and banks have been hesitant to renew links amid concerns about continued US sanctions and Iranian regulations.

Zanganeh told a ceremony in Tehran, “I hope that this goal will turn into a national demand.”

The Minister has pursued a new Iran Petroleum contract for months with foreign investors.

In early August, the Cabinet approved the contract, which replaces a fixed-fee model with an equity share for non-Iranian companies in joint ventures under a 25-year term.

However, the contract still faces objections from members of Parliament and other groups who might be affected by the terms, including the Revolutionary Guards. Foreign companies are also still negotiating the length and terms of the deal.

Zanganeh declared on Tuesday that contracts for three oil fields by the end of the Iranian year in March.